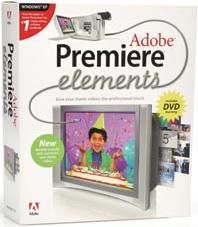 Through seven generations, Adobe brought its Premiere video editing software up from the ranks of the hobbyist and mid-level videographer fully into the world of the professional video editor. This migration opened a software vacuum, however, for the types of users which were the original enthusiasts of the product. Adobe’s competitors have not been slow in recognizing the vacuum and filling it with low-cost, easy-to-use editors. With Premiere Elements, Adobe turns an about-face and offers to newbies and enthusiasts its own low-cost solution. Though entering the fray late in the day, Premiere Elements takes the field with the strong technologies of its daddy, Premiere Pro, humming under its deceptively simple interface.

We tested Premiere Elements on a single-processor Pentium 4 2.2 GHz computer with 1GB RAM and an EIDE hard drive, using a Canon Optura 300 camcorder for video capture. Installation went smoothly. At startup, Premiere Elements (PE) greeted us with a friendly, simple start screen. The user manual was not yet finished at the time of this review, so we can’t comment upon it.

For our test, we produced a DVD containing a short video employing standard video editing techniques such as capturing, trimming, titling and adding effects. Buttons running across the top of the Premiere Elements interface helped us step through the process: Capture, Edit, Effects, Titles, DVD and Export. When completing each of these steps, we’d click a button to take us to the next and the workspace would change accordingly. You need not take the steps in this order, however, and could, say, jump back to Edit after working in Titles for a while.

We hooked the camcorder to the computer’s FireWire port and clicked PE’s Capture button. It first started a new project, then quickly displayed its capture window. This conveniently showed the amount of time available for capture, performing the hard drive space-time calculation for the user. By default, Scene Detection and Capture to Timeline were turned on. We clicked Capture and captured about seven minutes of video. PE dutifully dropped a thumbnail into its media bin at every new shot and placed all clips into the timeline in the order captured.

Adding some still photos to the bin was as easy as clicking Add Media and browsing to the photos. PE makes no provision, however, for ripping tracks from audio CDs. We had to use another application to copy some music files to the hard drive before we could import them into the media bin. It would be helpful, especially for the beginning videographer, to provide a File-Rip Music command, even if it just calls up the default ripper on a given computer.

As in Premiere Pro, PE’s media bin can be viewed either in List or Icon views; the latter functioning as a storyboard-editing interface. One can rearrange video clips and still images in this storyboard. A great time-saver, Create Slideshow, places all the selected items, in storyboard order, into the timeline, inserts the default audio and video transitions between them and correctly resizes still images not shot in television standard 4:3 aspect ratio.

In addition to healthy banks of video transitions and filters, the effects window reveals a folder of Presets. These are filters with their parameters already set and keyframed that you could use as they come, or as starting places for further customizations. Yes, keyframed. PE lets you keyframe and animate effects as readily as does Premiere Pro. Looking more like Dad all the time. In our tests of transitions and filters, PE delivered real-time previews of unrendered material consistently, as promised; though playback of areas containing several layers of complex effects got somewhat choppy.

If you want to select the precise frames of video for a DVD’s chapter points, you may do so by simply clicking DVD markers into the PE timeline above the preferred frames.

Clicking the DVD button brought up a DVD Layout dialog box that asked whether to create an Auto-play DVD with no Menus or Apply a Template for a DVD with Menus. We selected the latter and chose a template from among seven folders full of them. Our four-minute movie held two titles and around half a dozen special effects and transitions needing rendering. DVD Layout estimated 10 minutes for this encoding. It actually took 26. The DVD’s picture and sound quality were good.

The last button, Export, enables one to output the contents of the timeline to DVD, tape, four flavors of MPEG, QuickTime or Windows Media.

Adobe’s Premiere Elements 1.0 didn’t show any of the glitches sometimes evident in software first releases and remained stable throughout our test. This is likely because it makes use of some technologies from Adobe’s more mature products: Premiere Pro, After Effects, Audition and EncoreDVD. In future versions, we expect to see even greater integration with Adobe’s Photoshop Elements and Album.

Premiere Elements is more full-featured than many of its competitors, and as a result may be a bit harder to learn. The up side: it’s so feature-rich you may never outgrow it for home use. It should still be relatively easy to learn for the beginner. On the other hand, if you edit professional videos by day with Premiere Pro, you will feel right at home editing your family videos with its $100 son, Premiere Elements, by night.