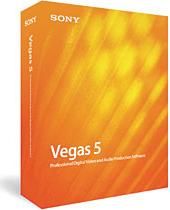 When editing applications upgrade a version, the improvements and additions are often at the professional edge. Casual editors might not even notice the differences. Such is the case with Vegas 5.0. It is a better app overall, but if you are happily using 4.0, you might not even notice that you’ve upgraded. If you are looking for your first serious editing application, Vegas should be high on your shortlist. In addition to a large grassroots following, we’re starting to see Vegas make serious inroads into professional production houses. Anecdotally, for example, a local newspaper ad recently offered work for a "Premiere or Vegas editor."

Vegas 5.0 basically looks almost exactly the same as 4.0, which is a good thing. In the interface department, you can now totally customize the keyboard and workspace to your liking and save the layout. Another customization option lets Vegas use a standardized MIDI control protocol so audio professionals can drive Vegas using a compatible mixer and, during subsequent playback, envelopes on Vegas’ timeline can drive the mixer. Extreme customization even extends to gaming joysticks, which you can use to control track sliders, surround panning and color correction. It’s a gimmick today, primarily because it uses gaming gear and requires manually coding configuration files, but it could be used to create professional manual user interface tools, such as those found in Sony’s $90K Xpri system.

Envelope control is improved. As with the previous version, you can record slider changes in real time as you watch the playback. During playback, Vegas automatically draws an envelope on the timeline as you fiddle with the controls. This works not just for audio volume/pan controls, but for fade levels on video tracks. Keyframe thinning is instantaneous and efficient.

Compositing has always been a strength of Vegas editing and we saw some improvements here, too. The mask creation tool is really quite useful and lets you create and animate Bezier masks point by point. We found this especially useful in limiting effects and we could track objects easily (but manually) in the source video. The excellent real time playback color corrector from the 4.0 version is about the same; we liked the new ability to invert the mask so that you can produce a "Pleasantville" desaturation effect.

The track motion dialog looks roughly the same, but has an entirely new dimension to it, literally. In the 3D mode, a track (layer) can now be manipulated in 3D space, complete with the various view windows (top, side, front). This is something you’ll only see in real 3D application or in some dedicated compositing applications, such as After Effects (after version 5 anyhow).

Vegas has changed the compositing model a bit in version 5 with something called track nesting. All this is, really, is a new way of grouping tracks and determining a compositing hierarchy. Confusingly, track nesting in Vegas is a completely different concept from the excellent nesting features found in Avid, Premiere and Liquid Edition, where nesting is a useful timeline organizational tool.

Vegas is already the only audio tool a video editor might need. There are some audio improvements too, most prominently the ability to use ACID loops in Vegas with their ACID properties intact. 5.1 surround mixing is not new with this version, but the automatic stereo down-mixing is an important addition.

The new subtitling feature in Vegas is very simply executed: just type text into a region marker on the timeline. You can edit the text files in any text editor and then export these subtitles into a DVD Architect project.

Speed and the Network Render

Vegas now has a network rendering feature, which is a professional feature found in some 3D animation and compositing applications. This allows you (with some effort) to set up a couple of other computers to outsource and share rendering tasks. There is a large management overhead with distributing rendering tasks, so only certain types of projects (e.g. with lots of tracks and compositing) will really benefit. Network rendering will not work with formats that require a license fee, such as MPEG-2 or Dolby Digital.

Network rendering can take another form in Vegas, which involves using networked computers for batch rendering. With Vegas’ scripting support (and the handy scripting templates that are a menu click away), Vegas can act as a powerful batch rendering tool, not unlike ProCoder or cleaner.

Media subclips allow you to trim a larger clip in several ways and save each trimmed clip as a subclip in the Media Pool (bin). This is a very handy new feature that will undoubtedly be useful on a daily basis. The ability to import Flash movies lets Vegas incorporate high-quality vector based art and animation right into the timeline, which is a great feature if you have a Flash artist on your staff. Vegas also has very up-to-date support for many hot formats, including 24p (with 3:2 pulldown conversion) and HD resolutions (although you’ll need a plugin for the HDV format).

We found that we immediately incorporated several of the new Vegas 5.0 features into our everyday editing routine, including organizing media subclips, customizing the workspace and the keyboard. Other new features we’ve used on a per-project basis, such as the great subtitle editor, the Bezier mask tool and the 3D track motion tools. Beyond that, solo Vegas 4.0 users will need to assess whether the new features are worth the $200 upgrade price, while users of earlier versions will find $200 to be a worthwhile investment. Production houses may find the advanced networking and batch rendering tools invaluable, provided they are ready to manual configure a custom system. And anyone looking for their first serious editor is in for a treat: all versions of Vegas, including this one, are suburb video editing tools with unsurpassed audio capabilities and impressive advanced compositing features.