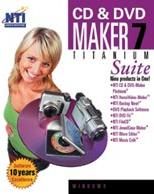 NTI’s CD & DVD Maker software is an affordable way to copy DVDs and CDs, as well allowing some simple, although impressive editing and assemblage of prerecorded clips.

It’s aimed primarily at the hobbyist who wants to edit home camcorder movies and save them to recordable DVDs, in addition to producing audio compilation CDs and data backup CDs and DVDs.

It’s available in two flavors, a "Platinum" version that retails for $50, and a deluxe "Titanium" version that sells for an additional $30 more, and adds some user-friendly, but surprisingly sophisticated video editing software. It’s this latter version that we’re reviewing, which requires a PC with at least a 900MHz Pentium III processor and 256MB to use.

Easy To Use GUIs

The CD & DVD Maker 7’s graphical interface is handsome and easy to use. It resembles a silvery DVD, and its circular design places the production of data discs at the top of the circle, creating audio and video discs in the middle, and data backup at the base.

In addition to its ability to edit and create DVDs, the program can also create video slideshows of GIFs and JPEGs, copy discs, produce a variety of audio CDs (including discs of MP3s), as well as produce video CDs and super VCDs, in addition to full-blown DVDs.

Innocently lurking in the midst of all of those options is what is arguably the most powerful program in the suite, which NTI calls HomeVideo-Maker.

This is the suite’s video editing program, and there are some very nice features here, which the first- time DVD creator will probably find extremely useful.

Depending upon your source material though, it may take a little juggling to import it, if my experience was any indication. While the program can capture videos and edit Windows Media files with ease, editing files ripped from existing DVDs was another story. I ended up converting the VOB files of TV shows I had copied using my home theater Sony RDR-GX7 DVD recorder to an MPEG2 file. Otherwise, the Home Video-Maker program would only play eight seconds of the file (I tried multiple clips from various discs I had burnt, each with the same results. Not sure if it’s the machine or the software, but it definitely took some effort to find a workaround.)

The HomeVideo-Maker’s interface is quite intuitive to learn and use and simple effects like wipes and dissolves are easy to create. It seems to automatically insert an audio fade-in and fade-out during these video transitions, whether you’d like or not, and there doesn’t seem to be a way to disable it. Also, even though our PC had a gigabyte of RAM and a 2.56GHz processor, occasionally, the audio would take a few moments longer than the video to load, particularly if viewing the middle of a long clip.

On the plus side, a very useful feature of the editing suite is its ability to create a .WAV file of a clip’s soundtrack, which can then be edited, cleaned up, burned to a separate audio CD, turned into a MP3 file for downloading, etc. It’s an easy to use feature for which there will be numerous uses.

Its ability to quickly insert chapters and create menus is very impressive. Chapter marks are easy and quick to make and then you can choose either that starting frame, another more memorable frame, or even moving thumbnail for the disc’s menu. Supplied menu templates run the gamut from cutesy Happy Birthday and Merry Christmas themes, to subtle minimalist backgrounds with a handsome animated sweep of light to add interest. If you want a different background, you can easily import a GIF or JPEG into the program.

If you’ve never used a video editing program before, there may be a bit of a learning curve, but it’s all pretty impressive stuff, particularly in a program that’s bundled in a suite, and after a while, it becomes intuitive, and quick and easy to use.

Once a project has been edited, chapters inserted, and menus created, a simple one-click routine burns it to disc, which takes anywhere from five to 15 minutes, depending upon the speed of your PC’s DVD burner, and the size of the disc you’ll be creating. I’d like to say, "which can then be viewed on any player", but, like any DVD authoring software, that depends on the medium your DVD burner accepts, and whether it’s compatible with your stand-alone players.

Could Be Just What A Budding Videographer Needs

NTI’s CD & DVD Maker 7 Titanium Suite does a variety of functions, and does most of them reasonably well. The key word in the title is "suite": obviously, there are more specialized (and more expensive) programs that allow much greater control over each aspect included. But for a very affordable price, NTI’s program could be just what the budding home videographer needs (ideally, along with a video capture card) to start converting camcorder tapes into DVDs.

Ed Driscoll is a freelance journalist who’s covered home theater and the media for the past decade.