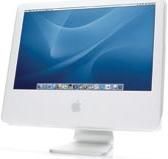 When we first received the 1.8 GHz 20″ iMac it was difficult not to cycle through our entire DVD collection in order to continually "test" the large, crisp 1680×1050 monitor and surprisingly good onboard speakers. But, alas, we had to put the entire system through the test wringer.

Thin but not light. Lifting it out of the box, we realized why: the slim-looking, slightly thicker than one-quarter inch, aluminum metal base is heavy. The base needs to suspend the entire computer which is built-in behind the display (two-inches thin in all). This means no more crawling under the desk to get behind the chassis to plug or unplug cables. The monitor/computer attaches to the stand by a hinge, enabling the user to effortlessly adjust the angle of the monitor. It's almost as if the monitor is floating.

The power cord passes through a two-inch diameter hole in the stand in the stylish and discrete way in which we have come to expect from Apple. Also found on the back side of the monitor: an audio line-in port, headphone-out/optical audio-out port, three USB ports, two FireWire ports, a modem port, an Ethernet port (10/100Base-T) and a video out port. The video out has an adapter you can connect to an external monitor, projection device, television, VCR, or other video device. Curiously, the power button is also located on the back.
The CD/DVD slot is located on the right side monitor with a power indicator light that pulsates on the lower right front, with the mic and speakers under the monitor. The keyboard has volume control buttons, a media eject button and two USB ports (one for the mouse and an extra).

The set-up was a breeze. We worked our way through most of the set-up menus with ease, though configuring our Wi-Fi with the AirPort Extreme card hung us up for a while. We credit this more to the not-ready-for-prime-time connectivity of Wi-Fi than to the Mac hardware. The included 95-page user's guide has a chapter on Internet set-up with easy to follow directions (glossary included).

All in all, it took us less than thirty minutes from opening the box to clicking on our first web page. But we didn't acquire this iMac to surf the information superhighway. We got it to edit. The computer comes with iMovie HD and iDVD5, both programs that surprised us with their complexity. We're still trying to figure out why we would pay for a DVD authoring program considering the strength of the new iDVD5.
iMovie HD is a strong entry level-editing program that has HD editing capabilities. But we needed something with more power. As we have come to expect, both FCP HD and FCX 1.0 loaded with the click of a couple of buttons. There was a bit of waiting time as the Pro needs to load nearly 500MB of information.

Sold on the Real Estate

I almost dropped my mouse when I saw the way the editing windows were laid out on the 20″ LCD. Being used to the 15″ laptop I have been cutting on, I thought I had died and gone to editing nirvana with this added real estate. The 512MB of RAM seemed to be moving me along sufficiently, (it ships with 256MB but FCP needs 512 minimum), though I'm used to cutting with a gig. The two memory slots in the iMac can hold up to 2GB of RAM.

You have the option to upgrade the hard drive space from the factory issue 160GB to 250GB. Though you'll want a lot of hard drive space, external FireWire drives are now affordable, stable and give you the sneakernet option (We run our projects to our audio people, music people, animators and more).

Pick up Your Pencils and Begin

And now the test. We captured from both a camcorder and from an external hard drive, took music both from CD and MP3s, imported stills, imported ADR (automated dialog replacement), made some simple titles, threw in a count-down, exported it as a QuickTime movie, dropped it in iDVD5 and burned a DVD, all effortlessly without a hitch or crash. That is what Mac lovers love about Macs. All the hardware and software is made to play well together without any of the third-party problems often encountered while assembling PC workstations.

This powerful editing turnkey with a small footprint is a dream machine for the beginner to the upper-end intermediate. Everything is included to get the beginner to middle-level user editing and DVD burning right out of the box. Intermediates will want to upgrade to FCX or FCP and will definitely want more RAM. Advanced users would probably prefer more expandability options.

Our one concern with this iMac pertains to its 1.8 GHz processor. That sounds fairly muscular today but we all know the speed at which the industry moves. I have been pretty successful at making my editing stations last a whopping four years and I don't think this processor will keep up with the software demands, not to mention my own speed needs. But all in all, I would be very happy owning this machine to edit on and watch DVDs.

Number of Physical Processors: one

Configurable with RAID: no