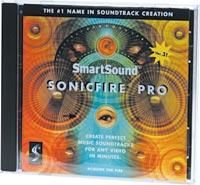 
The soundtrack appears as a single block that matches whatever duration you want. Users can change the duration by simply dragging the edges of the block. This larger block is made up of smaller blocks, that users can sort and adjust however they like. Each element is self-sufficient and can be used by itself to some extent. You can build your own song from scratch or use them to add onto the current song.


This modular paradigm makes song creation very easy and very nearly foolproof. At the same time, it also gives you a surprising amount of flexibility. For example, we created a solid 30-second intro for our project that ended with an upbeat bang just before our narrator turned to the camera with a warm "Welcome to the Show." Between segments, we were able to use different elements from the same piece as segues into the various parts of the program and, finally, we created a longer and steadier variation for the closing credits. The coordinated soundtrack gave the show a unified and professional feel.


Loop-based tools, such as Sonic Foundry’s ACID (recently acquired by Sony), have the potential to beat Sonicfire in the quality department. You can find drum loops from Mick Fleetwood, acoustic winds from Bill Laswell, heavy funk from George Clinton and real symphonic samples from starving classical musicians. If you have a good ear and can piece individual loops into 8-bar phrases, chord progressions, intros, breaks and decisive conclusions, you’ll very likely enjoy the many hours you’ll spend using a loop-based music tool. If you need music that’s guaranteed to sound good, and you need it fast, Sonicfire wins hands down.


Buyout music has the potential to beat Sonicfire in the quality department as well, but only if you shop carefully. Some buyout music is fully orchestrated, but many libraries are composed and performed on synthesizers and do not sound at all realistic. Further, buyout music limits you in duration and style, and it can be tricky to make the music fit the length of your project.


SmartSound offers users the best of both worlds. You get high quality buyout music with arrangements in a variety of styles and genres, all with customizable durations to fit any project.