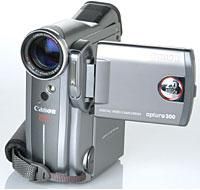 
Canon’s Optura digital camcorders have always aimed at creating a successful merger between the two worlds of high-performance digital video and print-quality digital stills. The latest in the series, the Optura 300, is no exception, offering a number of prosumer-level features in a small, elegant package.

Features
The Optura 300, which features a 10:1 optical zoom, audio level control, manual exposure control, microphone and headphone jacks, built-in auto-flash and 2.0 megapixel stills is an upright (vertical) camera with a small 2.5-inch flip-out LCD screen. The combination of performance, features, ease of use and small size mark the Optura 300 as a good choice for travelers, educators or anyone else who can afford to pay a little bit extra to get a lot more camera. The manual level controls for both audio and video, suggests that this camera is more than just a toy.

Form Factor
The challenge for designers of small camcorders is to include all of the appropriate controls and connections in such a way that it’s still easy to use and not too heavily reliant on menus and submenus. On this front, the Optura 300 is a success, presenting the full range of inputs, outputs and controls in a system that’s fairly easy to use, but it’ll still require a little practice. Ergonomically, the system of controls works well. Holding the camera in the right hand, you control most of the camera’s shooting functions with your right thumb and index (or middle) finger, leaving your left hand to operate the playback functions. To top it all off, the tape-eject system works even when the camera is attached to a tripod.

Shooting
While shooting, the Optura 300 behaves in many respects like a larger camcorder, owing in part to the camera’s sturdy feel and the excellent image stabilization system, which compensates superbly for intentional camera moves like pans or tilts. Manual focus and exposure are both controlled by the same pair of toggle switches on the back of the camera and are easy to use and responsive. The zoom toggle takes a little getting used to, as it sits right next to the Photo button, which makes it far too easy to snap a photo by accident while you’re shooting video.

The video, audio and images we captured with the Optura 300 were all very bright, crisp and clear. In low light conditions, you have the option to switch the camera into Night mode or even Super Night mode, but like most night-shooting systems, these are slow-shutter effects. Canon also includes an LED video light, which, although weak, might save your shot in an emergency. We wouldn’t rely on it for anything important, however. For digital stills, the built-in auto-flash system compensates well for lack of light in the shooting environment. In all shooting conditions we attempted, the camera’s performanceperformance of the camera was exceptional, with excellent color reproduction and sharp lines.

Audio and Stills
Pressing a button on the side of the camera brings up the Optura 300’s audio level meters, which are very handy indeed. The manual microphone level control, which adjusts both sides of the built-in stereo microphone equally, can also adjust the accessory microphone level, if you have one plugged in. This is a serious feature that is rarely found in consumer-level camcorders and may, by itself, be reason to go with this camera.

Press Play
Not intent on missing a single lifestyle beat with the Optura 300, Canon includes DV Messenger2 software, which you can use to connect your camcorder to your chat service (Windows Messenger) as a Webcam via FireWire or USB. When the camera is in Network mode, you can even use this software to access your camera over the Internet. You (or the person you are chatting with) can control the camera through a Web interface to snap pictures or record video, all remotely controlled over the Web through the chat software. This is more of a gimmick than anything else, but it could be useful for some security applications.

Oh Yeah!
The Optura 300 really shines out in a field that’s already populated with excellent cameras. It shoots well, is packed with useful features, has manual controls and an excellent lens. You can even eject the tape while it’s connected to the tripod. Perhaps the best part of this camera is that it is the smallest and least expensive cameras that has all of the audio tools you will ever need: mike jack, headphone jack, manual audio levels and audio meters. It is a micro-mini camera that, surprisingly, does not compromise on features. Does it sound as if we liked the Optura 300? We did, and we encourage Canon to keep up the good work.