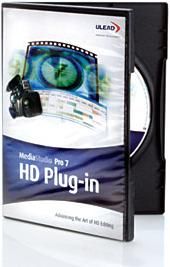 The HDV format is gaining wide industry support, with more camera manufacturers signing on and many software companies offering editing solutions. Of course Ulead is at the front of the pack with its MediaStudio Pro 7 editing software ($295) and the Ulead HD
Plug-in ($299). At these prices, this is the least expensive HDV editing package available. And, as many of you already know, MediaStudio Pro is a full-featured, professional editor that has been around since the early days of desktop video.

HD Production Studio
The HDV format should not be confused with other professional HD formats that have entry-level price tags around $20,000 (minimum!) for a camera and editing system. JVC’s HDV cameras are around $3,000 and you can edit using any reasonably fast (say in the 3.0GHz range) Windows computer (Macs solutions are on the way). This means that you could be up and producing HDV video with a barebones setup for less than $5,000.

How Ulead Makes MPEG Streams
The Ulead HD Plug-in transfers video from an HDV camcorder and creates editable MPEG-2 video files on your computer. As Ulead says in its literature, the video is changed from "transport stream" to "program stream" MPEG-2. All this really means is that the raw MPEG video on the camera is not well suited to editing and the Ulead HDV plugin fixes this. This process is lossless and does not alter the quality of the video. This is an important distinction: CineForm’s Aspect HD plugin solves the editability problem in a very different way, converting the MPEG-2 video to a different format. From our tests, the CineForm conversion did not result in any visual loss of quality, but it was a conversion nonetheless. The purpose of this is to make the video easier to edit with real-time previews, via CineForm’s rendering engine.

The original MPEG editing software that shipped with the JVC camcorders basically worked the same way the Ulead plugin does, but the software was virtually unusable as a result of the tremendous processing power required to perform even the simplest edits. The minimum system requirements for the Ulead HD plugin casually bring up this issue: 3.0GHz processor and 512MB of RAM. The question is, even on such a system: Will MediaStudio Pro be able to handle the MPEG-2 video better than the JVC solution?

Ulead’s Media Studio Pro In Action
We installed MediaStudio Pro (MSP) and the Ulead HD plugin on a P4 3.4GHz machine from 1 Beyond side by side with Adobe Premiere and the CineForm Aspect HD plugin. We should point out that the Adobe+CineForm solution is about $1,000 more expensive than Ulead’s. Our tests reveal that there is a clear difference in performance, with the CineForm solution offering better realtime previews with more complex effects. Again, this is a result of how the CineForm plugin handles the video and requires you to use only the special CineForm effects. You cannot use your favorite Adobe effects or the superb transformation tools without sacrificing realtime previews.

The Ulead solution lets you edit the MPEG video just the way you would any other video, using any of MSP’s native tools, effects and transitions. The downside is that it is not a realtime solution and you need to render everything, just like you used to in the old days. MSP handles this process very well, however, and by setting preview ranges, the workflow is smooth. Both the CineForm and the Ulead solutions require a render at the end of the day before you go back out to the camcorder.

The timeline is very responsive and scrubbing is efficient and sprightly. MSP was completely stable when working with the HDV footage. Interestingly, once you have captured and converted the video from the camcorder with MSP, the video is in standard format that any editing application can handle. So, theoretically, you could capture with Ulead and edit the video in Premiere.

Ulead’s HD Solution
We are still in the early days of the HDV format, but we can say that it looks like this is a format that will catch on. Will HDV replace DV? That is highly unlikely. Is it a less expensive substitute for $20,000 HD systems? No. Still, viable software editing solutions like the Ulead HD Plug-in make HDV a very useable format. Without special hardware, even the fastest computers will be challenged.

So this review ended up being a sort of Head-2-Head brawl between Ulead and Adobe+CineForm: Who is the winner? Since the CineForm plugin converts the video and has a special rendering engine, it does much better with previews and overall workflow. The converted video and the CineForm rendering engine make HDV editing just about as fast and easy as DV editing, provided you are willing to live with the limits of using only CineForm effects. Ulead’s lossless conversion process and the unlimited flexiblility are the best reasons to recommend MSP+HD, but the $1,000 price differential is nothing to sneeze at.