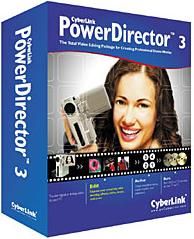 The sub-$100 capture-edit-burn software field is a crowded one. When you first run CyberLink PowerDirector 3.0, you might be forgiven for mistaking it for Ulead’s VideoStudio 7 or Pinnacle Studio 9. These products often come bundled with hardware products, such as capture cards or, more frequently, computer DVD burners. We have nothing bad to say about any of these packages: if it is included in the box, by all means, go ahead and give it a try. But should you shell out an additional $100 for the full version?

The workflow of PowerDirector is clear and simple: capture, edit, author and burn (although "author" is called "produce"). The simple capture process has an attractive interface that even beginners can understand, with standard navigation buttons such as play, stop and rewind. We liked the DV QuickScan feature, which runs through your entire tape and visually logs the various scenes. Then, you simply go back and click on the thumbnails to select the scenes you want, then go make yourself a smoothie while the clips capture. While not an uncommon feature in apps of this level, it’s generally scoffed at by professionals who would much rather spend a couple of hours logging In and Out points manually to create a batch list. With the exception of Ulead’s Media Studio Pro, professionals will have to get the excellent Scenalyzer software ($39) to take advantage of DV tape scanning.

Again, editing looks and feels almost exactly like Pinnacle Studio, and is no better or worse overall as far as usability is concerned. You can switch back and forth between a storyboard mode and the timeline, which is nice.

Like Studio, there really isn’t an overlay track for fancy compositing, but you can do titles (of course) and there is a track for creating picture-in-picture effects. It has a few usable effects (including a Pleasantville-style desaturation filter) and we liked the option of applying them to part of a clip instead of the whole thing, complete with ease in and ease out of the effect.

The situation for audio is similar, with a couple extra audio tracks you can mix into the source audio from your video. PowerDirector includes audio envelopes (a.k.a. rubber bands) to control the volume of the audio over time, which, for example, allows you to fade music in and out under your voiceovers. We also really liked recorded and automated changes to the audio mixer’s faders during playback. Another killer audio feature is the ability to time stretch and compress a clip without changing its pitch. This is not a completely magic feature and is limited to a certain percent of the original duration, but it can be a butt-saver.

We did have some problems ripping audio from CDs into our copy of PowerDirector. The only change that we would like to see in how PowerDirector handles audio is the ability to separate the original audio from our captured video. As it is, you can mute the native audio track and adjust the volume the same as any other track, but you just can’t really perform split edits (where the audio continues underneath your video edits) without a lot of work. Split edits are fundamental and are useful on almost any project you can think of. Again, PowerDirector is not alone here and it’s too bad that most entry-level software makes the split edit a difficult task.

Performance is primarily a function of how fast your computer is and there are two places where this is important: previewing and rendering. Previewing means watching your edits to see how they look. With a modern computer, say a 2GHz machine; everything previews in realtime, especially since software in this class has limited compositing capabilities. PowerDirector (and Studio and Video Studio) was fast enough for previews on a 2GHz computer.

Rendering is another story and, like it or not, you will have to wait for renders. Not overnight anymore, but to create the properly formatted video for a DVD, you will probably have to wait about 2x realtime. Not a big deal, just make sure you plan for an extra two hours of computer processing for an hour-long project (including the disc burning) before your toasty warm DVD is ejected from your DVD burner. We can objectively report that PowerDirector’s rendering engine was speedy, however, and bested the competition, but only by a small amount. Quality-wise, we were not disappointed either.

DVD authoring was simple. A few clicks through a wizard was all it took to encode the video and then you could design your menus using the competent EzProducer. Burning was trouble free. With wide support for many formats, including DivX, the technology behind PowerProducer is solid. There are some extras we found in no other products, including a DVD Disc Defragmentation utility for rewriteable discs that was very interesting indeed.

So is PowerDirector 3.0 worth $80? Considering what it does, capture, edit, titles, audio mixing, effects, DVD authoring and burning it’s remarkable that it only costs $80.Unfortunately, we have no real reason to recommend PowerDirector over Ulead VideoStudio or Pinnacle Studio (or the Apple iLife suite, for that matter). With only a few minor differences, these products all do the same thing and have roughly the same features. None of these companies are known for their tech support, especially not for sub-$100 software. Although fairly stable and mature, these products can behave badly on some computers, so go ahead, download the trial version and give it a whirl. If you happily use one of these applications, we can’t think of any reason to switch to one of the others.

Not a bad introductory editing application that is certainly worth a free trial download.