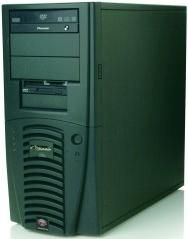 Safe Harbor is a company that offers an extensive line of custom-configured, turnkey video and graphics workstations for the serious professional. They use premium components and software pre-assembled in a package that’s ready to edit the day it arrives. We’ve long been advocates of this kind of service, because no matter how much experience you might have putting together your own video editing systems, in the long run, it’s much more convenient to have someone do it for you. If you’re a professional video editor, your time is valuable, a system like the Safe Harbor Tsunami series can save you a lot of lost productivity caused by downtime and system crashes.

The Hardware
We had a look at two Tsunamis in two different cases: one case from Lian Li and one from Antec. Both cases were high-end beauties, but Safe Harbor has, after much careful deliberation, chosen to go with the Antec model. We’re not going to go into the details of why here. Suffice it to say that we were quite impressed that Safe Harbor was sweating over such “minor” details as the case: standard beige steel would have worked, right? The fans on the machine are not loud, but this is not a silent machine. There are two front-mounted USB ports. The inclusion of a floppy drive that incorporates a memory card reader is a nice touch and should make it a little easier to transfer still images from a digital camera.

Inside, the Tsunami RT.X100 houses an Intel 3.2GHz P4 processor. With a gig of dual-channel RAM, an 80GB Seagate Barracuda system drive, another 120GB storage drive and two striped (RAID-0) SATA 120GB Western Digital Caviar drives for video storage, this machine can handle video. We clocked the RAID at nearly 800 Mbps, which is quite speedy indeed. Topping off the system is a Matrox P750 display card, which is a 64MB dual-head card.

The system is bundled with the Adobe Video Collection Standard (Premiere Pro, Audition, Encore and After Effects) and you can immediately begin editing with real-time transitions and effects right after turning the machine on. Total time from opening the box until editing: about seven minutes.

Real Time
Of course the heart of the system is the Matrox RT.X100 card, which includes a wedge-shaped breakout box (BoB) that conveniently brings your analog video connections to the front of the computer or the top of your editing desk. A FireWire jack is not included on the BoB and the only connection is around the back.

We fired the Tsunami up and were ready to go. We cabled up a Sony DV camcorder and put the computer through its paces, capturing analog and digital video via the RT.X100, editing via Premiere Pro and After Effects. We finished with a short DVD project using Encore and the Panasonic DVR-A07 burner. At every point in the process, the Tsunami worked flawlessly, and required no hardware or software configuration whatsoever.

The RT.X100 handled real-time effects in almost all everyday situations, but the machine was fast anyhow. We hit 21 fps in our two-pass VBR MPEG-2 rendering test, which is almost exactly what we expected from testing similarly spec’d computers. Curiously, the HT aspect of the P4 processor was turned off in the BIOS. More curiously still, it didn’t seem to affect the performance (or stability) of our tests when we went ahead and turned it on.

While a lot of editing is real time in Premiere Pro on a 3.2GHz computer, the Matrox RTX.100 card does offer some enhancements. We could stack a couple of overlays with a few effects and then lay a title on top of them and still get real time finished video out to our DV camcorder, with qualifications. The primary catch is that you have to use Matrox effects. One video effect is just as good as another, in most cases. So, whether you use the Matrox tools to move your video around in the overlay track or use the Adobe transformations, the result is the same (especially to your viewers, who couldn’t care less). The only real downside to the Matrox effects is the user interface. It’s not a bad user interface and the usability is good. The problem is that it works as a plug-in that is not a part of Premiere Pro. We were not fans of the Premiere 6.5 (or earlier) user interface, but the standardization of the Premiere Pro controls is really nice. For example, the Adobe transformation tool (which we use on almost every project) is the same in After Effects and in Premiere.

Service and Value
When you purchase a Tsunami system from Safe Harbor, you have the option of selecting one year of toll-free technical support, which includes three free round-trip shipments between you and the company, should that become necessary. The price tag is, admittedly, not cheap. It’s not that the system is expensive: if you tried to build a system like this yourself using identical components, you’d have a hard time saving any money. Besides liking the machine, we were impressed with Safe Harbor as a knowledgeable system integrator that cares about quality.