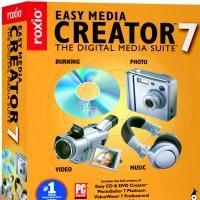 Roxio, a company that has made a name for itself as a creator of easy-to-use, powerful, and popular CD and DVD burning software, takes a big step forward with Easy Media Creator 7. This is an all-inclusive suite, which offers CD and DVD burning, photo editing, video editing, sound manipulation and DVD authoring in an integrated, affordable and easy-to-use package. We’ll focus our energies on evaluating those elements that are particularly interesting to home videographers: video editing, DVD authoring and sound manipulation.

Program and Content
Easy Media Creator 7 comes on two CDs, one containing the program itself and the other containing a large collection of themes, templates and other ready-to-use content. The installation utility is identical to the one used for Microsoft Office products. When you select the Custom install option, a folder tree interfaces allows you to select the components you want to install. This is important, since the total install size for all of the components is over 495MB, which is hardly insignificant.
When you run the application, you’re presented with the Home screen, which presents the software’s numerous capabilities in a simple interface. This is perhaps one of the main improvements over Roxio’s earlier media creation suites, which tended to offer numerous small applications in a scattered, unintegrated fashion. On the other hand, the unified interface contains such a broad array of tools that it almost feels like you are running another operating system layer on top of Windows. It’s all rather much and rather a lot of clicks if you just want to burn a data CD.

Get Your Edit On
The Edit menu on the Home interface lists four options: Capture Video, Edit Video, Auto Edit with CineMagic and Guided Edit with StoryBuilder.
When you click the Capture Video button you see a dialog that gives you a number of options for capturing video, audio and still images. Plug in your camera (via the FireWire jack), click on the camera icon and you’re presented with a simple, clean capture interface that allows either manual capturing or SmartScan capture. SmartScan is a scene detection utility that splits your tape into clips based on scene starts and stops. You can also quickly prescan a tape to preview it before you capture which ultimately saves disc space. This isn’t exactly the same as a manual batch capture list based on time code, but we wouldn’t expect this in a non-professional application. Besides, prescan and capture is easier.
Once you’ve captured some video, you can press the Edit Video button and move on to the new VideoWave 7 (VW7) video editor. VW7 sells on Roxio’s Website for $80 and the identical, full version is included in this suite for $100. VW7 offers simplistic timeline or storyboard-based editing that seems to have modeled itself closely on the interface of Apple’s highly successful iMovie. The interface is very easy to use and can be used to make good short videos. It does have some very useful features: the Overlays screen, for example, offers some very nice options for compositing.

Audio Improvements
The new audio controls offer more than many typical video editing applications in its category. This is welcome news, since previous versions of VideoWave were weak in the audio department. We worked extensively with the audio editing and are pleased to report that VW7 has basically all of the audio capabilities you’d expect of an app in this category. You can mix and layer the ambient audio from your camcorder, add background music and add sound effects or a voiceover narration. Audio envelopes are also available to automate fade in/out and to duck music beds under your voiceover. Of course (of course!) the audio previews in real time.

Auto Improvements
The CineMagic auto-editing application takes a fun approach to video editing and walks you through the process step-by-step, Wizard-style, which might be useful for those who are intimidated by the VW7 interface. You simply import (capture) your footage, specify a song to use as the background music and make a few style choices and the program creates a music video for you. The footage is not just randomly cut together, but (like the muvee autoProducer) the software looks for certain visual clues to select scenes that might be interesting. All in all, the process works rather well and is tremendously fun.
The StoryBuilder guided edit interface is a similar, Wizard-style step-by-step video editor that makes use of pre-generated storyboard templates to complete your production. Again, this is very useful for beginning video editors and not as much so for the more experienced among us. Still, for you veterans out there, how often have you had a finished movie ready to view in less than an hour? Hmmm, for casual home videos, this might be the way to go: less editing, more showing.

Author, Author
The DVD authoring portion of Easy Media Creator 7 is similar to the other video-related applications and is neatly integrated with the rest of the suite. Buttons are pre-designed and menu-building is slightly limited, but the software does offer options for motion backgrounds. The pre-designed menu themes are professional-looking and easy on the eyes.
As a whole, Roxio’s Easy Media Creator 7 is a real value. We were glad to see the immense improvements in the VideoWave editing software and were pleased that the disc burning technology that is Roxio’s core is still excellent. At almost a half a gig, it is a lot of software, however, and sometimes it seems to try to do too much. What if you just need a disc burning application? There is no doubt that this will be a popular all-in-one multimedia suite, especially at less than $100.

Weaknesses:
• Too much for just disc burning