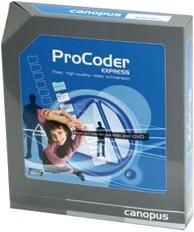 All video editing software will encode video to a variety of formats and most of the time this is all you’ll need. Still, we find ourselves in situations where all we really want is a file converter and not an editor. For example, what if you just want to archive finished video to a Web format? Open your editor, add media to the bin, drag it to the timeline and then render out to a new file seems like a lot of work for a simple conversion. Unfortunately, dedicated compression tools, such as Canopus ProCoder or discreet cleaner, are rather pricey. That’s where the $60 ProCoder Express comes in.

Installation
For such a "lite" application, ProCoder Express clearly has quite a lot of processing power. The install goes through a number of steps, installing various codecs and requiring a couple of serial numbers. When you are finished, you’ll also have to go online and activate the product. None of this is particularly unusual and although the install was involved, it completed without a hitch.

Converting Time
The basic conversion process can be as simple as selecting a target format (e.g. DVD) and selecting the source file you want to convert. A step-by-step wizard walks you though all of the basic variables. Each format (codec) has its own parameters that you can adjust and tweak if you find it necessary. ProCoder Express also works as a plugin for a pair of Canopus editing applications and for Premiere 6.5 and Pro.

Encoding speeds were not surprising. As a comparison, we converted the same file to DVD-ready MPEG-2 using three encoders (Main Concept, TMPGEnc, and ProCoder Express), constraining the output variables to match as much as possible (e.g. 2-pass VBR at 6 Mbps). The TMPGEnc encoder was the slowest, ProCoder came in next and the Main Concept encoder was the fastest. You can tweak each of the codecs for faster performance (by decreasing the quality of the motion estimate, for example), so speed is irrelevant anyhow. At its fastest setting, the ProCoder codec could encode almost 26 fps in 2-pass VBR on a P4 3 GHz machine. Clearly, in single-pass modes, it’ll exceed realtime by a long shot. As we’ve said before (and we’ll say again), we’d wait all night for a good encode, so speed is definitely not everything.

It used to be that some MPEG-2 codecs were distinctly better than others. Today, that distinction is more difficult to see, especially when all of the codecs were slowed to use their maximum quality settings. We could examine individual frames and find some differences, but once the video was flying along at nearly 30 fps, we found that there was little we could say about the quality difference between these three codecs.

Watch This
ProCoder Express doesn’t exactly have a batch-processing feature, which would allow you to automatically convert multiple input files to multiple outputs (say both to DVD-ready MPEG-2 and to QT for the Web). This is one of the primary reasons a media firm might need a dedicated, professional, expensive encoder. For $60, ProCoder Express isn’t a professional encoder with industrial capabilities, however.

Still, you can automate encoding by pointing ProCoder Express to a single watch folder. The program will automatically convert any files in this folder to a specified output format. Better still, any time you drop (or save) a file into this folder, ProCoder will immediately set to work on it. If you make this folder accessible on your network, anyone can drop files into it for conversion, so you could essentially set up a dedicated encoding computer on your LAN for $60. That’s some pretty serious industrial-strength encoding. Make sure you consider the time it takes to transfer huge video files across your network in your rendering calculations. In our real-world tests over our office’s small-but-typical network, we were able to consistently transfer DV video files faster than twice realtime, so a minute of video took less than 30 seconds to move to the watch folder. Even at ideal rates, 4x realtime is the theoretical max for 25Mbps DV files over a standard 100BASE-T network.

DivX Flexibility
DivX is an MPEG-4 based compression codec that is very popular with the younger crowd to copy and share DVD movies on CD and over the Internet. It is an excellent codec that has many legitimate uses, however, and is beginning to be more widely used by content creators. In short, it compresses files much more efficiently than MPEG-2, but it also requires a faster computer to decode the video on playback. The tools you need to encode your video using DivX Pro are free for personal use (advertisements in the app support the product), but a license is included with ProCoder Express (with no advertisements). The other compression highlight of the package is Canopus fine MPEG-2 codec (for DVD). Beyond those two gems, the standard array of input and output formats are included, such as QuickTime, Real and Windows Media. Of course, other codecs already installed on your machine will also be available.

Compression Convenience
In the end, this product is all about convenience. Sure, the quality of the video is good using the MPEG-2 codec, for example, but then again, so is the video coming out of the Main Concept encoder found in most video editing and DVD authoring apps. ProCoder Express is fast, but not any faster than its competitors. The watch folder feature is a real standout for home productions, but it could be a killer app when installed on a dedicated rendering computer on a network at a small production house.

Other: DirectX 9, Internet connection (for activation)

Video Output Formats: same as input plus DivX and Real