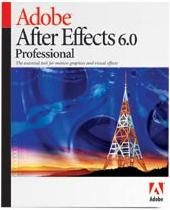 When new versions of a user’s favorite application are released, the excitement of anticipation is usually mixed with a touch of dread. Dread because, like an old friend’s extreme makeover, the change may render them unrecognizable and the characteristics that you have grown to love may be carved away.

No worries! The architects of Adobe have this upgrade thing down-or up as the case may be. With three major upgrades, in about as many years, Adobe After Effects 6.0 Professional is a must have (darn it). So cough it up again, AE junkies — you know you need it.

A main standout in this incarnation of AE is the assimilation of other characteristics and tools of its other Adobe brethren. The seamless workflow from Photoshop, Illustrator and Premiere to After Effects is becoming reality.

Photoshop files retain individual layer order and information, like masks, with text layers remaining editable in the Comp window of AE6. Your graphic print designs can move to dynamic motion media now without being reinvented or rebuilt.

Illustrator files can now have effects applied while keeping their continuous rasterization advantage. Precomposing or flattening Illustrator vector images is unnecessary when just adding a shadow for example.

This upgrade nugget will make those who have slaved countless hours over Text manipulation in After Effects (after first building them in Photoshop or using AE’s own cumbersome Path Text effect) place their heads to the keyboard and weep with thanks to Adobe design engineers. Text is now editable in the Composition window just as in Photoshop (and more). The familiar character tools palette is present for changing font, color, stroke, point size, leading and kerning. A Text layer appears in the timeline as soon as you type in the Comp window and its attributes are editable just as any other layer would be. Unlike the old way of importing bitmap resolution Photoshop files that pixelate when scaled beyond their original size, text generated in AE is vector based. It is continuously rasterized, even when using Transform properties like scale or 3D Z-plane positions and, therefore, is sharp and clear, no matter how an editor manipulates the text. In addition, AE6 lets you add animators that control many other text attributes. AE6 lets you also pick and animate the range of characters, words or lines in use. For example, if you adjust the opacity of a text layer to zero, you can have the range of effected characters slide from one character to the next over time. This makes each letter character disappear in turn as the Range Selector moves from one letter to the next. This is a simple concept that lends itself to a great deal of creative freedom in designing and animating text. If text editing was the only addition to AE6, that alone would be worth the price of the upgrade from 5.5.

The paint tools have also had a pretty significant overhaul making AE6 look more and more like an animated version of Photoshop. Even though painting individual frames (rotoscoping) is an extremely tedious task, it becomes much more attainable with the upgrades in 6.0. The Clone Stamp tool is also an awesome add on. Use it once to fix an arrant boom dropping into your best take or to clean up a patchy lawn and it will pay for your upgrade just in aggravation relief.

Some of our favorite AE6 upgrade denizens reside on the work surface itself. The Tools now look like all the other palettes and integrate with the rest of the workspace instead of the little box that was always buried under other windows. Tools are smartly grouped into three sections: move tools, paint/text tools and view tools. Effects are also in a palette menu ala Premiere, which saves a lot of time, instead of jumping up to the pull down menu and wading through the list each time you want to add an effect. The user can customize the viewing of effects in the palette as well.

In the Composition window, several new buttons line the bottom frame that will become more and more useful to the editor as we get used to having them. The Toggle View Masks button toggles the mask outlines on and off so, if a track or tracks are selected, the user need not have the view of the composition obscured by mask outlines, unless working with mask adjustments. The Region of Interest button defines the preview area, thus saving the pixels the system needs to load into RAM for playback. The Transparency Grid Toggle button is great for viewing only what the margins of your composited elements look like without the background color, which is very useful for checking mask feathers. The Toggle Pixel Aspect Ratio Correction button lets the user toggle non-square/square pixels when editing NTSC video on a computer monitor.

We used After Effects 6.0 Professional to build a 30-second TV spot for a resort golf course that had a complex comp with nested video composite, precomps with color correction and masks and eight layers of text animations. AE6 was as stable as we have seen from the folks at Adobe, drawing screens quite quickly and not bombing once in the edit, rendering the 900 frames in about 35 minutes. We used an older Pentium III 800MHz along with Premiere 6.5; so don’t laugh — it’s reliable.