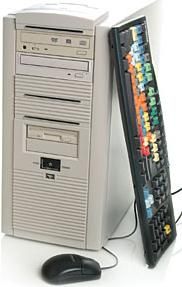 Applied Magic has long supplied videographers with standalone video editing boxes designed to be easier to use and more stable than general-purpose computers. While modern computers are unquestionably more complex than an Applied Magic ScreenPlay or Sequel appliance, the argument for greater stability is much harder to make. Newer computers running WinXP or OSX are pretty darned stable and we now measure the time between crashes in days instead of hours. There’s still a place for editing appliances in the market today, but Applied Magic is expanding, moving into new markets as a system integrator with its new HD CINEMA turnkey editing system. Build around a fairly standard Windows PC, the editing computer is constructed, configured and tested for HDV editing so that it arrives at your door ready to go.

The computer itself is pretty standard, with an Intel P4 3 GHz CPU, a gig of dual-channel RAM and a 120GB system drive. Our MPEG-2 render tests show that the machine performs as we expect this configuration to: 20 fps. The case is beige and the cooling fans are quite audible. Two 160 GB hard disk drives are RAIDed together into a single 300 GB video storage drive, which is merely a convenience and does not improve performance, but is more than adequate for HDV video. The Matrox Millennium P750 display card has a modest 64 MB of RAM, but is a fine dual-head display card with two DVI outputs. Overall, nothing to complain about, but nothing to get too excited over either.

We plugged in, powered up the machine and were soon looking at a WinXP desktop without any further configuration. The HD software package that Applied Magic integrated centers on Adobe Premiere Pro with the CineForm Aspect HD plugin (reviewed elsewhere in this issue). We were very pleased with the synergy between the software and hardware and found HDV editing just about as easy as editing any other type of footage.

In most situations, we could edit the HDV footage with real-time previews directly from Premiere’s timeline. This performance is due in large part to the Aspect HD plugin, but the hardware that Applied Magic has assembled handily exceeds the recommend specifications for the software. As long as we continued with HDV footage from the camera and used the included special CineForm effects, we could create transitions and overlays without a hiccup. In the end, HDV editing is not true real time, however, since everything eventually needs to be rendered anyhow.

As a system integrator, Applied Magic has done a fine job, teaming up with its neighboring software developer at CineForm to produce an out-of-the-box HDV editor. Make sure you factor in the $999 that the CineForm Aspect HD plugin would otherwise cost you as well as the cost of the included Adobe software when you start shopping. The HD CINEMA machine is certainly more than the sum of its parts however, and, like all good turnkey vendors, the advantage of going with Applied Magic is the personalized service and assistance that a smaller, specialized company can offer. But don’t take our word for it: give them a call.