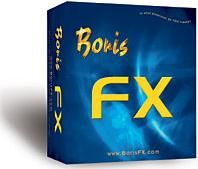 Video effects products come in many shapes, sizes and price points. In a field populated by software that ranges from simplistic, fun-loving home video filters to high-end compositors, animators and 3D titlers, Boris FX occupies the middle ground. This is a place where independent event, corporate and educational videographers endeavor to get the most bang for their video buck. The approach of Boris FX is simple: it’s an integrated solution that works within existing popular video editors that offers a smorgasbord of professional-quality lighting effects, 3D movement, filters, transitions and even particles. Aimed at serious video editors who like a lot of control over their effects, the Boris FX line has become a popular choice within its intended audience.

Boris FX 7.0 adds the usual amount of minor enhancements and modifications to its successful software package, including a slightly enhanced render engine, Vegas support, Mac OS X and Windows XP support and a few new filters. One major enhancement is support for OpenGL hardware acceleration. To test this new capability, we installed the software on a test computer with a 3.2GHz P4 and 1GB of RAM. The key OpenGL component, however, was the ATI All-in-Wonder 9800 video display adapter with hardware-based OpenGL acceleration and 128MB of RAM. Our host application for the Boris plugin software was Adobe Premiere Pro. This is a very high-end setup (especially the ATI 9800 graphics card) and we were consistently able to get real-time playback of high-quality, multiple-layered effects.

Boris FX gave us hands-on keyframe control over every conceivable parameter, from lighting effects and motion to masks, borders, colors, shadows and crops. It’s certainly not a software package for beginner-level video editors, but if you’re the kind of editor who likes to control all of the little things, then Boris FX 7.0 might be just what you’ve been waiting for.

When you first install Boris FX 7.0, you’ll find a screen that asks you into which host software package you’d like to install it. Choices include Premiere, Premiere Pro, After Effects, Vegas and a user-defined option that allows you to plug the software into other unlisted software packages. The list of supported host applications is extensive, from Adobe through Apple and on to Avid through Ulead (see www.borisfx.com). It is not necessary to use Boris FX as a plugin, however, as it works just fine as a standalone application.

Once installed, we accessed the software via Adobe Premiere Pro’s Video Effects tab in the Projects window. As we began working with it, Boris FX 7.0 revealed a user interface that’s slightly more customizable, accessible and user-friendly than previous versions. The addition of more keyboard commands should appeal to veteran video editors who like to zip through layers of menus with just a few keystrokes.

To test the capabilities of version 7.0, we started with a simple one-second page-turn effect, which was completed and exported back to Premiere in a matter of seconds. Next, we added a lighting effect to the page turn to make the shadows darker and the highlights brighter. A few keystrokes and mouse clicks later, we had an acceptable modification and still no rendering was necessary. Working in this way, adding one parameter or effect at a time, the OpenGL acceleration provided by the ATI video display card wasn’t challenged at all. To kick things up a notch or two, we created a composite effect with four video sources that exploded into a particle effect with motion blur. Getting this to look right took some doing: the Boris FX interface is powerful first and user-friendly second. The History palette was very helpful in going back a few steps to get things working just right.

Once we got everything working properly, the OpenGL acceleration handled the whole thing without flinching (or rendering). In fact, in our tests, we were unable to determine at what point the ATI card could not handle the amount of digital effects number-crunching we were throwing at it. We’re sure there is a threshold, but whatever it is, we didn’t reach it in our tests.

Even a short list of Boris FX 7.0’s many features would take up more space than this entire article. Some highlights include natural wood grain, water effects and flame effects, all manner of filters, lighting controls and particle generators.

Our favorites: the particle systems and motion blur effects, which you can manipulate right down to the pixel, frame and RGB color settings.

In the world of video editing and effects, there have been two trends driving recent product development and innovation: more control and more real-time power. Boris FX 7.0 addresses both of these trends beautifully and at an affordable price point. While it isn’t the easiest software to master, it is hard to imagine how to offer such power and user-defined control without requiring something of a learning curve to get into the game.

Computer gaming is a huge industry, possibly as big as the movie industry. Dedicated gaming hardware, like the ATI 9800, is a part of that equation. It’s great to see applications like Boris FX take advantage of that graphics muscle. It’s about time!

Demo Version: 63MB (will not render)

A great solution for power-hungry video editors who want hands-on control over a wide range of real-time effects.