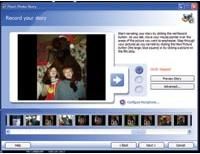 Here’s a quick way to make videos from all those digital still pictures on your hard drive. It’s called Photo Story 2, an application within Microsoft’s Plus! Digital Media Edition for Windows XP. The software allows you to import your images, arrange them and add titles, narration and music. You can even direct pans and zooms across the images.

We installed Plus! on a Windows XP Home machine (Plus! only works on XP). You can choose to install the entire Plus! pack or only Photo Story 2. The original Plus! pack for WinXP that came with Photo Story can be upgraded to version 2 for free, but it is a 21 mega-byte download.

We ran the program and then clicked Begin a Story. The entire process is wizard driven and we imported still images into the application’s timeline, both by using Photo Story’s Import Pictures button and by simply dragging a selection of photo files from Explorer. Photo Story has no tool for rotating pictures: they must be in the correct orientation before importing. We tried importing 300 files and Photo Story complained that it could take no more than 150.

We set a play order by dragging and dropping them into place in the timeline. Each image appeared in turn and we could record a narration that ran with each picture. The Advanced button takes you to another dialog box where you can set up the panning across a still image, ala Ken Burns, by selecting some presets. This is a really neat effect, but it will take a while to set up for 150 images. Although the help text in the dialog suggested that we could simply click on the image to set the panning motion, this did not work for us.

The next step is to create our opening titles, which we put over an image of our choice. Then we added background music, which is required, either from mp3 or wma source files. Now we clicked the Preview Final Story button and watched our video slideshow.

Next came a screen for selecting the output. We chose high quality for both, since we wanted to make a Video CD (VCD) using the MPEG-1 format. The other option is to create Internet video in the WMV format. An Advanced button here allows one to download additional customized encoding presets. It took Photo Story about 5 minutes to render the video running on a 2.2 GHz P4 and the burn took another five minutes on our fast (40x) CD burner. The VCD contained the movie we created and the source image files.

The VCD played without problems in a JVC DVD player. It started with our opening title and proceeded showing our stills dissolving from each to the next, panning and zooming, with narration and music running throughout. The music clip we selected ran far shorter than the duration of all the stills (150 total), so the music repeated over and over and made a quick fade out at the end. Some of the zooms were a bit jerky and in areas where we tried to narrate over two or more pictures, the narration was chopped at each picture change. Nevertheless, the result was pleasing and fun to watch.

Almost all basic video editing applications and some image cataloging programs (such as Ulead Photo Explorer, $30) allow you to create a basic slide show almost as easily as Photo Story 2. These apps will typically not have a limit to the number of slides, may rotate the pictures and have better narration tools. What we really liked about Photo Story 2, however, was the cool, automatic Ken Burns-esque pan-and-scan animations. Photo Story 2 makes your digital slide shows more like showing a photo album to a friend while pointing to, and verbally identifying, people and things within the pictures.

Photo Story 2 is a quick, easy fun way to transform your still photos into moving slide shows for playback over the Web or in DVD players.