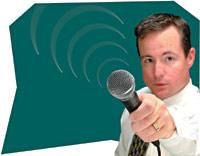 Athletes know there is a special place on their weapon of choice (golf club, racquet or bat) where they get the most control and power from their swing. They call it the "sweet spot." In the same way, your audio weapons (we call them microphones) also have sweet spots — best positions or applications that will yield the highest quality audio for your video shoot. Let’s look at the four major types of microphones and how to find the sweet spot. Optimum microphone positioning and aim, regardless of the mike type you use, is key in attaining excellent audio for your video project.

Possibly the fastest, easiest way to mike your talent is with a hand-held microphone. Just plug in the mike, give it to the subject and hit the record button. That’s it. Of course, with all its simplicity, there are also a few drawbacks. A little attention to detail will help you get the most from this top performer.


Hand-held microphones come in two flavors, omnidirectional and unidirectional. Omnidirectional mikes are great for picking up a scene’s ambient sounds along with the voices. As long as the mike is held fairly close to the person speaking, you’ll get good voice quality and a nice sense of the location. If you are shooting in a noisy environment (such as downtown traffic or a construction site), a unidirectional microphone is a better choice. Using its directional characteristics, you can emphasize the voice of your talent and minimize the interference of background noises.


With the evening news as a guide, it’s easy to see how one should hold a hand-held microphone. Simply hold it at about chest level, point it at your mouth and talk. That said, there are a few more details to the equation. Remember that video is a visual medium. If the microphone is held too high, it will obscure the face of the talent. On the other hand, if the microphone is held too far away, the sound will become distant and difficult to understand (plus you’ll have to work harder to make it sound good during editing). Also, make sure the position you choose is consistent from scene to scene. Changing microphone positions makes for inconsistent audio.


It is important that the subject speak across the top of the mike, not directly into it. The sensitive pickup elements can cause loud popping sounds called "plosives" when P’s and B’s are directed into the mike. For best results, your talent should hold the mike at a 90-degree angle to the mouth.


Microphones turn sound vibrations into an electrical signal that we can record. By the same token, they can turn other vibrations into recorded sound too. For instance, the rings and/or bracelets your talent is wearing can bang against the microphone or cable and produce clicking or thumping sounds on your video. Of course, if you are shooting outside, make sure to use a windscreen – the foam-ball type works well. This will keep wind rumble in check and, as an added benefit, make the microphone a little nicer to look at.

Used for everything from interviews to sound effect recording, these little guys are probably the most versatile performers in your audio arsenal. Although they are more difficult to use, the extra effort is worthwhile. The best part is you don’t have to spend a fortune on your lapel mike. A $25 mike can sound almost as good as a $200 model.


Most lapel microphones (also called lavaliers) are of the omnidirectional flavor, but several excellent directional models are also available. While the directional version is better at isolating the speaker’s voice, positioning is critical and they are more prone to mechanical noise from clothing rubbing on the mike or cable. As a result, you should resist the temptation to hide a lavalier mike inside your subject’s clothing.


Lapel mikes excel in interview situations. Typically clipped to a tie, shirt or jacket lapel, the microphone stays a consistent distance from the talent’s mouth and gives you very reliable sound from start to finish. In a pinch, you can clip them to a T-shirt or sweater collar, but be aware that the sound will be less defined, maybe even muffled since the microphone will be somewhat obscured by the talent’s chin. While we’re on the topic of "clipping," there are several ways to secure a lapel mike. The most common method is to clip the mike on a shirt, hiding the cable behind the band of buttons and then bring the cable out at the beltline (out of the camera’s view). Alternatively, there are tiepins and magnets available to mount your microphone.

When all else fails, reach for a trusty shotgun microphone, but be aware that they can produce a love-hate relationship. The sound is always consistent, the microphone is never seen on-camera and it works equally well in almost any situation. Then there’s the bad news: they’re more expensive, require special hardware and usually require another operator. It’s a case of taking the good along with the bad.


Shotgun mikes are available in long and short varieties. Long shotguns are over two-feet-long in some cases. The extra length allows them to isolate a sound or voice at great distances. Unfortunately, the longer the shotgun, the more artificial the sound seems. That’s where the short shotgun comes in. Sometimes only a foot or so in length, the short shotgun microphone is a compromise of directionality and sound quality. The directional pattern is much tighter than a typical hand-held mike, but the sound it produces is less rich.


Because shotgun mikes are so sensitive, they are clamped into an isolation mount, usually a series of rings with rubber or elastic bands, to isolate the mike from the rest of the mounting hardware. The isolation mount can then be attached to a pistol grip for hand-held use or to a "fish pole" for suspended use. In outdoor applications, you will often see the microphone covered with a cloth or fur sock to minimize wind noise.


Using a shotgun microphone is a bit of a balancing act. You want the microphone as close to the sound a possible, yet outside the video frame. The preferred method is to suspend the microphone just over and in front of your subject. With the mike in the overhead position pointed downward, the ground acts as a noise buffer and ambient sound is reduced.


Alternatively, you can point the mike up from under the subject. This method produces less spectacular sound, but is good in a pinch. In the low position you’ll need to be particularly aware of ambient noise. Airplanes passing overhead or birds perched in a nearby tree, for instance, may be picked up by the mike.


If you are shooting alone, you’ll likely need to mount the microphone to a mike or boom stand (good) or to the top of your camera (not so good). If you have the luxury of an assistant, they can boom the microphone on a pole during the shoot. Using a pair of headphones, your assistant will hear exactly what the microphone hears.

Also called pressure zone microphones (PZM), these unique mikes lay flat on a table or get mounted to a wall and turn the entire surface into a pickup. Often used in legal video and board meetings, the boundary microphone is a great weapon to add to your audio arsenal.


On a tabletop, the boundary microphone has a hemispheric pickup pattern. Imagine a ball cut in half and you have the idea. In this position, it picks up sound equally in all directions within 180 degrees. This is great when you have several people to cover, but can’t give them each a microphone. Just set out one or two boundary mikes and you’re set.


It really is that simple, but there are some obstacles to watch for. Anything that makes noise is fair game, and the boundary mike doesn’t care if it is a voice, paper shuffling or air conditioning rumble. You probably won’t be able to control these elements, so beware.

Regardless of the microphone(s) you choose as audio weapons, test them before putting them into service. You’ll be happy you did. For a true test, put on a pair of headphones and use the microphone just as your subject will. This will provide valuable insight into the characteristics of each type of mike and will help you identify the sweet spot for your next shoot. It can only help improve the audio track of your video.What About

Wireless?Wired microphones are more reliable than wireless models, but there are times when a wired mike isn’t practical. Fortunately, you can use wireless options for all of the major types of microphones. Several manufacturers make belt-pack wireless lapel mikes. Some even have battery-powered receivers that mount directly to your camera. You can also purchase a wireless add-on for your existing hand-held or shotgun microphone. These are usually equipped with a small box or tube that plugs into the back of the microphone. Just remember that you get what you pay for. The less you pay for your wireless system, the lower the quality. Conversely, the more you spend, the happier you’ll be with the final sound.