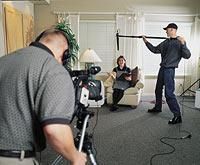 Getting quality audio when you tape an interview seems like a no-brainer because the subject just sits in one spot in a quiet room and talks. Step one: aim camcorder; step two: roll tape. What could possibly go wrong?
Step three: harvest hair by tearing it off your head during post production because of lousy sound quality. Why? Because the subject and mike sound as if they were in different counties or the interviewer sounds trapped in a 55-gallon drum or both interviewer and interviewee garble their words together so much that a neurosurgeon couldn’t cut ’em apart.
In short, there’s more to interview audio than meets the ear and most problems arise from mike-to-subject distance, inconsistent sound quality and/or failure to keep the subject’s audio separate from the interviewer’s. Fortunately, these problems are solvable if you know where to look for them and how to cope with them. That’s our homily for today. We’ll review options in choosing and placing microphones, procedures for setting up and recording interviews, and strategies for both two-person (interviewer on camera) and one-person (subject only) interviews.

The big problem with all interviews is that video and audio have opposite requirements: the camera should be as far from the subject as space permits, while the microphone must sneak in as close as it can get. The camcorder should be placed well back from the subject, for three reasons:
1. A camera is less intimidating when it stays out of the subject’s face. Ideally, the interviewee should gradually forget the camera completely.
2. A distant camera requires mild telephoto lens settings, which are generally more flattering to subjects.
3. A long camera throw allows greater flexibility in positioning lights.
In contrast, a microphone should be as close as possible to enhance voice quality and exclude unwanted background sounds(see Figure 1). The obvious solution is to separate video and audio hardware by using an external mike. This is practical for even the most low-rent enterprise because Azden, Radio Shack and others offer very competent mikes for under $100 – way under $100.
My first choice is a lavaliere (tie clip) mike because this design is engineered specifically for interview-style applications. I like cabled lavs because wireless is no advantage when the subject doesn’t move around, and hard-wired mikes are not subject to radio interference especially when using low impedance, balanced lines. (For more on this see the February 1998 Sound Track or find it online here).
On the other hand, if your budget permits only one set of mikes, you may prefer wireless lapel mikes for their versatility when in use in other, non-studio situations.

The next best option is a boom mike. A fishpole is fine for a multi-setup production where no shot runs longer than a few minutes; but holding a pole aloft through a half-hour interview can reduce the buffest biceps to old rubber bands.
An inexpensive shotgun mount works well on a boom, unless its sensitivity pattern is extremely narrow. You may also want to consider the more forgiving pickup pattern of a cardioid mike. Positioned between subjects, at right angles to the axis between them, a boom mike can quickly swivel back and forth to catch both people.
Finally, you might try a short stand mike, especially if your subjects are sitting on opposite sides of a table. With careful composition, you can keep the mike below the frame line. A boundary mike can be used in this situation too, also known as a Pressure Zone Microphone, the (PZM) is both unobtrusive and effective. A PZM lies flat on a hard surface like a table or podium.
But what if you’re stuck with your built-in camcorder mike? Then set up a video/audio compromise, like this:

What happens to the interviewer’s audio quality when the mike is aimed at the subject throughout? That depends on your recording strategy: how you want to capture audio for later editing.

In setting up a sound recording system, the objective is to provide clean, easily edited tracks. To do this, you can choose to record one track or two, and each approach has multiple sub-options.
If you’re using the modern interview style that seems like a subject monologue rather than a Q&A session, you can mike the interviewee only. The off-mike interviewer will still be audible enough for reference during editing. (For tips on interview approaches, check out the July 2000 issue of Videomaker, page 102.)
If you want high-quality recordings of both parties, you may wish to place a mike between them on a stand or fishpole boom; or, budget permitting, mike them separately and use a production mixer to balance input levels.
For the greatest possible flexibility, you’ll want to lay the two audio streams on separate tracks. One way to do this is by feeding each mono mike to one channel of a stereo input. That way, you get separate tracks synced to a single video.
In a classroom or similar setup, you may be shooting with a separate camcorder covering each party. That can solve two problems at once. Both participants have separate mikes permanently optimized to record them and each audio is recorded on a separate track.

After you’ve selected the mikes, placed them for good pickup, and recorded them for flexible editing, the final chore is to monitor and control audio quality.
First of all, use good headphones of the studio type that exclude outside sounds. You wouldn’t capture video without ever looking through a viewfinder, would you? Headphones are viewfinders for the ears and every bit as important.
As you listen through those phones, check for the glitches that commonly afflict audio tracks:

Nothing is more frustrating than trying to doctor bad audio in postproduction. If you follow the tips in this article and invest a little in some external microphones and perhaps even a mixer, you’ll be on your way to getting great interview audio.