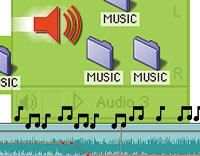 By now it’s old news that digital audio offers editors power and flexibility that were once available only in the medium of film; and maybe the easiest way to flex all that muscle is with music. While it’s important to reinforce the video stream with well-chosen music selections, here we’ll focus on how to manage all the music that you’ve picked.

Starting with the assumption that your show includes more than one piece of music, we’ll show how to choose different selections for mix-and-matching, how to time music to picture, how to optimize tracks for underscoring, and how to make smooth transitions from one piece to the next. And while you’re browsing in this musical bazaar, check out our exciting grab bag of music editing tips.

This is not about how to choose music in general, but how to select two selections that play back-to-back (or at least in close proximity). Basically, you have two choices: similar music styles or contrasting ones, and of these both options have pros and cons.

Similar A and B music tracks are hard to cross-fade satisfactorily, and when you try to butt them together they tend to sound awful. But if your program has an overall consistency of subject and tone (like a family picnic or a garden show) you may want to preserve that uniformity in your music. To solve the mixing problem, use fade out/fade in transitions, with at least a few no-music seconds in the middle.

Two quite different musical tracks are much easier to cross fade and they work well when the tone of the video changes (say, from languorous beach to jumping nightlife). Trouble is, they sometimes sound as if they belong in entirely different programs. Here, the trick is to conform the audio characteristics of the tracks (as distinct from musical ones) for better consistency. More on this in just a moment.

You often want to match the length of a selection to the video it supports, even when the two are different lengths. Chopping the end of the music off is strictly for amateurs. Instead, you can use front timing, back timing, or both.

Front timing means starting your music at the beginning of the selection, rolling it to a suitable point in the video, and then fading it out.

Back timing means matching the natural end of the music to a similar end point in the program and letting its beginning fall somewhere ahead of the start point of the musical cue. The selection begins running dead silent and then fades up at the chosen in-point. Here again, soften the entrance by fading in under over a few seconds, then sneak the level up full.

If you get good at this, you can sometimes use the same piece of music twice to fill a section too long for a single pass.

Today, you can get digital music packages (such as Acid by Sonic Foundry) that let you time music automatically, right down to the frame. If you edit a lot of video to music, you should look into one of these software applications.

This isn’t the place for a general discussion of digital sound manipulation. Here, we want to take music selections from widely differing sources and conform their audio traits so that they ultimately end up belonging to the same program.

First, of course, you want to match volume levels. To begin with, you should establish two standard levels for each program, one for "music full" and the other for "music under." Conform every selection to these standards, and don’t rely on sound track timelines or on-screen VU meters. Always earball the effect and make adjustments until the levels sound subjectively right.

Next, use equalization to conform the characteristics of different selections. Knock down the higher frequencies of shrill passages and moderate the THUMPA bass of woofer-whoppers. The idea is not to homogenize all music selections, but to make them sound as if they at least belong in the same show.

You may also want to use limiters to restrict the dynamic range of ultra high-fi recordings, especially for music used under narration or other audio tracks. Here again, the goal is to make every piece of music sound as if it were specially written for this show.

In any A/B transition, we’ll assume that selection A is music, but what about B? It may be another piece of music or it may be simple silence. In some cases, you can crossfade between music and distinctive ambient sound. For instance, suppose your program dissolves from a sequence of prepping a light plane for a flight to a takeoff sequence from inside the cockpit. The pre-flight sequence is supported by music under. As the video dissolves to the cockpit sequence, crossfade the music with the ambient sound of engine noise.

If the new sound is percussive (like thunder or gunshots) or very loud (like the inside of a steel mill) you can often end the preceding music with a straight cut. The shock of the new sound conceals the fact that the music has simply quit playing.

When intercutting contrasting sequences, you may not want to make any music transitions at all, because simple butt-cuts reinforce the video. For instance, Muffy VanSoshe and Dudley Ducktail are both driving toward the meeting point for their blind date. She pilots her Benz to the strains of the minuet from Don Giovanni, while he snarls along on his Harley Hog to Satisfaction by the Stones. Cutting back and forth between the parallel sequences you chop the music on exactly the same frame as the picture, this effectively works to reinforce the contrast between this unlikely twosome.

As we’ve indicated throughout, the most common transition is a crossfade (also called a segue). All rules are made to be broken, but it’s generally true that longer crosses work better. Again, try dipping the outgoing piece to music-under level, before cross fading to the new piece, also at half-steam, and finally fading the incoming full.

And as we wrap this session, remember to always use pre-recorded music responsibly. Mozart and the Rolling Stones are fine for family shows. But if you intend to make some money with your program (or show it publicly, even for free) get the music rights like a good video citizen, okay?