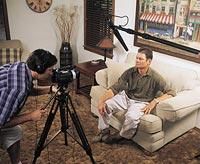 If you’ve ever recorded yourself on tape, you probably did a double take the first time you heard your voice played back. Who was that, you probably wondered. Your voice hasn’t changed; your perspective has. Normally when you speak, you hear your voice internally through your body as well as through your ears. But others hear your voice as it’s carried through the air. And the environment where you are will affect the quality of your voice. So you’re voice will sound quite different depending on if you’re in a shower, a living room or an airplane hangar.

If sound had a visual element, you would see a series of three-dimensional waves emanating from a source , traveling through the air toward a destination. It is the length of these waves (their frequency) that determines a sound’s pitch, while the height of the waves (their amplitude) controls the volume .

As sound waves travel through space, they penetrate or bounce off of the various obstacles they encounter. And it is the areas, shapes, textures and spatial relationship of these obstacles that affects the quality of the sound. Each of these characteristics helps determine to what extent sounds are reflected or absorbed by a particular surface or object in a given environment.

Take your living room, for example. It combines a number of various dimensions, surfaces and objects that create a unique acoustical environment. So whether you’ve got wall hangings or bare walls, hard wood floors or thick rugs, upholstered furniture or none at all and drapes or blinds on the windows, will affect the quality of the sound in that room.

Sound, like water, travels a path of least resistance. So it will change and adjust its trajectory, much the same way a river will flow with the landscape, depending on the acoustic environment of a particular room. This is why your talent’s voice can sound very different depending upon the environment where you record.

Higher frequencies, for example, tend to bounce easily off of impermeable surfaces. But in a room with heavy drapes and furnishings, these higher frequencies tend to get absorbed by the fabrics. You might describe your talent’s voice as sounding "softer" or "richer" in this type of environment .

The drapes and furniture absorb the higher sounds so the mike doesn’t pick them up. In a room with no soft surfaces, where upper frequencies reflect freely and are absorbed less, your talent’s voice might be described as "tinny" or "hollow" . Although there are instances where this acoustic environment is ideal for the effect you’re after, for the most part, you’ll want to avoid this hollow sound.

Reverb (or reverberation), is another facet of acoustics that causes some common audio problems. Reverb occurs when a sound source radiates into the environment and reflects off the surfaces of that environment back to the microphone . The first element of reverb is called early reflection, better known as echo.

With echo, the source bounces off the nearest surface and returns to the listener or microphone just after the initial sound (delayed) because it has traveled a further distance. As the early reflections continue to bounce off the other surfaces in the environment they lose energy, becoming quieter and less intelligible. This element of reverb is known as decay because it slowly fades into silence.

Early reflections and decay pose various problems in different recording situations. A cavernous cathedral may have a huge decay time but if you place the microphone close to your talent and they speak softly, the reverb may not be problematic. Early reflections will cause more problems in a small room with hard, parallel walls. In this situation, you can dramatically improve the acoustics by deadening one wall or moving furniture to break up early reflections.

What’s it to you’

As we’ve illustrated, what your ears hear and what your mike records are two completely different things. Most people have the ability to stand in a crowded, noisy room and carry on a conversation with one person; blocking out all other voices and sounds. A microphone, however, hears everything without prejudice. It is important to keep this in mind whenever you’re recording.

After returning from a shoot, you watch and listen to your tape as you prepare to edit. You are dismayed to hear a tinny and hollow soundtrack. Why didn’t you notice it when you were shooting’ Probably because as you set up in that environment, positioning your camera and lights and talking to your talent, you got used to the acoustics of the room. Your brain blocked out those annoying reverberant reflections that are now tainting your soundtrack.

A professional audio engineer learns how to focus his attention on those unruly reflections by using headphones to carefully monitor the sounds that are collected by the microphone. To record good audio, you need to learn to ignore the content until the environment, microphone placement and talent give the best aural result possible. By using headphones and listening to the sound as your microphone hears it, you can easily identify and compensate for any unwanted sounds or tones that your ear would completely miss.

When you first started shooting video, you had to learn to think visually, in terms of what something would look on screen, as opposed to how it looks to the naked eye. You can do the same with audio by learning to think in terms of how your source sounds to your ear and how it will sound when you record it. By seeing the soundscape of a given environment you can begin to anticipate potential problems or benefits of a given environment.

The best way to develop this aural skill is by experimenting with various microphones and their placement in a different acoustic environments. This will help train your ears and eyes to work together to provide you with a rich, detailed mental image of the soundscape you encounter while shooting. Microphone placement and type of microphone can have a dramatic effect on your soundtrack.

When using a camera-mounted microphone placed several feet from your subject, the acoustical environment will be evident on tape. Shoot the same subject from the same distance using a lavaliere microphone, for example, and the quality of the soundtrack will sound very different. It’s up to you to decide what type of microphone works best in what position to get the effect you’re after.

Like every other aspect of video production, your skill level will depend on your experience. And the only way to get experience is to actually get out there and shoot. Practice may not make perfect, but it does make better. Pay attention to the sound of different types of environments and practice seeing the soundscapes. Before long, you will be able to see and hear a better soundtrack.