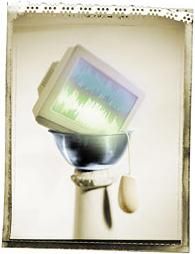 Gather ’round everyone, it’s time to reveal the secret ingredient that all the pros agree must be added to each of your video recipes if you want to cook up an outstanding program. Ready? The secret ingredient is… great audio!
That’s right. To be good at making videos, you must learn to be good at editing audio. If you doubt the truth of the above statement, try this simple exercise. Pop a tape you haven’t yet watched into your VCR – fast forward a bit into the heart of the program – then hit Play, turn your back on the set, and listen. You’ll probably discover that you can still understand most of what’s happening in the program. Now turn around and watch the screen, but turn the sound off.
Unless you’re a talented lip reader, your comprehension of what’s happening will fall off quicker than a chef’s hat in a hurricane! The point of this little exercise is to underscore just how important audio is to the success of any video and to also demonstrate why most of the new digital video editing programs also sport some very tasty audio editing features!

In the old days, sound editors had to rely exclusively on their ears. Today, nearly every digital editing system has the capability of producing a visual representation of what your audio tracks look like. This is a wonderful new ingredient! In Figure 1 you can see an audio waveform as it might be displayed in the timeline of a typical video editing interface.
This particular waveform represents the sound of a voice saying the phrase, "Hi, my name is Bill" (Figure 1A). The peaks and valleys representing the groups of words and spaces are easy to see, and in most editing programs, the process for doing basic audio editing on this kind of dialog is simple and sweet. Using the razor blade tool (1B), you would just click on the audio track in the space right before the word "Bill" (1C). That cut would separate the track into two parts. Making another cut right after the word "Bill" would isolate the word. Selecting and deleting the edited section would remove the word and leave silence in its place (1D).
However, silence is not always a good thing. Play the track and unless you have background music or other sounds to cover the gap, you’d probably notice that the sudden absence of background noise makes for a pretty sour edit. Background noise? Absolutely.
Unless the audio you’re editing has been recorded in a super-quiet environment or in a special audio recording booth, it will include ambient background sounds. In audio jargon this is often called "room tone." To avoid sudden silence in an audio track where you’ve deleted a sound, you need to copy the room tone from another part of your recording and paste it into the gap.
Figure 2 shows another audio waveform that represents the same voice saying the simple phrase, "Tom is not here" (2A). If we cut the word "Tom" (2B) from example 2 and instead of using room tone, paste it into the gap we created in example 1, we instantly create the new phrase "Hi, my name is Tom" (2C). This is digital audio editing at its most basic. This sort of cutting and splicing works great on an audio-only file. But when you’re working with files that have both audio and video content, things get a bit more complicated. If you don’t separate your audio and video first, even a simple cut like this will cause a major glitch in the video part of your program.
The solution is to "unlink" the video from your audio before you do the edit. The ability to "unlink" your audio and video is a powerful capability, but be careful – it also has the potential to mess up your program in a hurry! That’s because if you "unlink" a clip and then paste some new audio into the audio tracks without ALSO adjusting the matching video track, you can throw your program "out of sync" and leave it looking and sounding like a badly dubbed foreign film! This is NOT a recipe for success!

In the real world of "audio for video", things are rarely as simple as our first two examples. For example, when working with video files, replacing the name "Bill" with the sound of the word "Tom" on the audio track causes a problem if we can clearly see Bill speaking on our video – his lip movements won’t match what we hear. This is where "B-roll" footage in the form of a video cutaway can save the day by covering up the mismatch between the new audio and the old video.
Look once again at audio sample 2. Do you notice something odd about the script? Here’s a hint. How many people do you know who would actually say something as stiff as "Tom -is -not -here." In the real world, we’d be more likely to say "Tom’s not here." Use that phrase in the edit we practiced above and the result would be "Hi, my name is Tom’s." Now that’s going to leave a bad taste with your audience no matter what’s showing on the screen!
You might attempt to zoom in to your audio waveform and make a stab at cutting the "z" sound off the end of "Tom’s." Sometimes this kind of edit works, often it doesn’t. It all depends on how the script was read, and how consistently it was recorded. Which is one of many good reasons to practice consistent audio field recording techniques.
The more uniform all your dialog recordings sound, the better the chances you’ll be able to successfully cut and paste things later to repair a copy problem or fix a dialog flub.

Great chefs talk about "balancing flavors." In audio, it’s just as critical to achieve the proper balance between your different sounds. Particularly when it comes to mixing background music with the program’s narration or dialog.
One sure way to ruin an otherwise well-made video is to bury the dialog with background music that’s too loud. Here, the quality of your audio monitoring equipment can be your best friend or your worst enemy.
Most video monitors, including even high-dollar professional units, are woefully inadequate when it comes to their audio capabilities. Sporting tiny speakers, these units emphasize midrange sounds. They do an often woeful job at high frequencies, and an absolutely dreadful job at letting you hear common low frequency sounds such as traffic noise and air conditioning rumble.
How can you properly balance your soundtrack elements if you can’t even hear them accurately? Headphones. Even a modest set of headphones will out-perform a typical video monitor speaker. Plus a decent set of headphones will do double duty since you can take them on location and use them to make sure your field audio recordings are free from sonically "sour" ingredients.

Nearly all editing software has some pretty fancy audio processing tools built-in. These usually include audio transitions such as soundtrack cross-fades and the ability to season your "audio stew" by applying a variety of filters and effects.
Cross fades are the sonic equivalent of a visual dissolve. Instead of an abrupt transition between the sound of two adjacent scenes, the sounds overlap smoothly as the scenes change. This effect is particularly useful if you need to smooth out the audio transitions between two scenes which need to be cut together, but were shot at different times.
Simple audio effects such as reverb and basic echo are also built into nearly every editing program and can add a sense of "depth" to sounds. High-pass and low-pass filters help eliminate unwanted low-frequency rumble, or high pitched whistles and whines from your soundtracks. And a software audio compressor is useful for reducing the dynamic range of an audio track – a process that can make some sounds such as voiceovers appear more "present" in your mix. And don’t forget to experiment with audio filters.
Whether built into your software or purchased later in the form of "plug-ins" there are audio filters for many edit programs that do everything from simulating a canyon-wide echo, to turning a 10-year-old’s voice into something like Darth Vader’s menacing Star Wars rasp.
As with bold flavors in the kitchen, try to use these audio spices carefully so you don’t "over season" your mix.
For a more "in-depth" look at audio for digital video, consider checking out the Sound Track column in Videomaker magazine, dedicated to the art of audio for video.