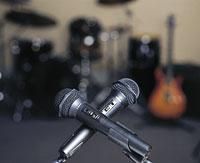 One of the major goals of a videographer is to create a three dimensional world on a two- dimensional screen. Every shot you set up should help produce the feeling of a three-dimensional environment. Actors move toward and away from the camera to give a sense of depth. You shoot buildings from an angle to show their size, and we you use foreground objects to frame the subject. All of these techniques add to the illusion you’re trying to create. But what about the audio? Can you make it three dimensional too? The answer is a very resounding yes! Throughout this article, we will look at how stereo works, stereo miking techniques, the equipment needed and at the advantages and disadvantages of each technique.

All too often, audio is considered at the last moment and usually treated like a distant cousin to video. "Most televisions play only mono, why worry about stereo?" some might ask. The answer is quite simple. More and more people are integrating the television into their home stereo systems. They’re even going as so far as adding surround sound decoders, similar to those found in theaters. The days when the television sat alone in the living room are long gone. Because of this trend toward integrated multimedia systems and stereo or surround sound television setups, we must work hard to make our audio three dimensional. One way to do this is the use of stereo miking techniques. Although you should primarily record voices primarily with single shotgun microphones or lavalieres, you can greatly enhance the music and sound effects, as well as background ambient sounds with stereo miking techniques.

When you listen to a CD and hear the drum solo slide from left to right or when you duck down in your seat as bullets whip past your head at a theatre, you are experiencing stereo sound. We position sound in our world through a phenomenon called binaural hearing. Your two ears, separated by the width of your head, allow you to hear sounds and distinguish the direction they’re coming from. The sounds that come from your right hit your right ear first, then your left. You perceive the sound as being louder in the right ear than the left ear.

When you create stereo sound, you may use the panning capabilities of an audio mixer to control the location of the sound by increasing or decreasing the volume of the left or right channel. Another way to create stereo sound is to use stereo miking techniques that approximate the binaural effect created by the placement of your ears. In other words, you can use two microphones that act like your ears. These miking techniques not only give us a stereo picture; they also assist in our perception of space. Our sense of space can be affected by sounds reflected off various surfaces. These sounds, called reverberations (reverb) indicate the size of the room and the types of surfaces that exist in the room. The more reverb, the harder the surfaces. If your scene is in a carpeted living room with curtained windows, you will have very little reverb. If you are recording in a cathedral with stone floors and walls, you will have a great deal of reverb. This reverb, while dampening the directional quality of the sounds, provides a fullness that makes the soundscape richer and more aurally complete.

One of the most common of the miking techniques is coincident miking. This set of techniques derives its name from the way that you place two microphones as close as possible in the same horizontal and vertical planes. The most common technique is the X-Y array.

The X-Y array uses two cardioid (directional) microphones placed on the same horizontal plane with their heads touching (see Figure 1). For miking small groups and narrow spaces, you should place the microphones at a 90-degree angle. This spacing allows most of the sound to come from the center with some left and right coloring. If the area is larger, you will create a more even stereo image by spacing the microphones at a 140-degree angle. The wider the angle, the more spread out the stereo image. You will also get a richer sound through the uniform pickup of the reflected sounds that create reverb. However, if you place the microphones at 180 degrees, the middle of the stereo picture will receive little direct sound and will be very weak.

Another form of coincident miking is the Blumlein Technique (see Figure 2), named for Alan Blumlein who perfected the method in England in the 1930s. For this technique, you place two bi-directional microphones at a 90-degree angle to each other. Known for its extremely accurate stereo picture, this technique also provides a uniform pattern of reverberation across the stereo soundscape. There is no problem with phase cancellation and it translates to mono quite easily.

Middle-Side miking, or M-S miking, is another commonly used technique (see Figure 3). Place a cardioid microphone facing towards your main sound source and a bi-directional microphone facing exactly left and right of the main sound source. To pull this off, you will need a piece of equipment called a matrixing transformer that mixes the two signals and controls the width of the stereo picture and the volume levels in relation to each of the signals. Although it requires some special equipment, this technique provides an extremely accurate side-to-side and front-to-back stereo picture.

While coincident miking techniques offer accuracy and uniformity, they depend on precise microphone placement to achieve a successful recording. In addition, because of the closeness of the microphone heads, they tend to produce a sound that is cold, shallow and tight. To get a warmer, more spacious sound, you would use spaced array microphone techniques.

In spaced-array techniques, you space the microphone heads away from each other. There are several of these miking techniques.

The crossed X-Y miking technique, sometimes called near coincident miking, uses two cardioid microphones crossed in the middle at angles varying between 90 and 140 degrees (see Figure 4). This technique, while similar to the coincident X-Y technique, creates a warmer, more spacious sound. One potential problem is stereo to mono compatibility. The wider the angle, the more greater the delay between the left and right signal and the greater the possibility of phase cancellation. If you have to provide a mono signal, keep the angle between the microphones at or near a 90 degrees.

A variation of the crossed X-Y pattern is the ORTF method (see Figure 5). This method, named after the Office of Radio and Television of France, uses two cardioid microphones mounted on a single stand. Place the microphones so the bottoms are touching and the microphone heads are 18mm (about seven inches) apart at an angle of 110 degrees. This method of stereo miking provides a phenomenal stereo picture and it creates a sense of three dimensional space and openness.

Using this method to record a symphony, for example, would give listeners the sense of standing on the podium, next to the conductor. They would be able to hear the first violinist over their left shoulders and they could accurately point to the positions of every instrument in the orchestra. The stereo image is fantastic.

For larger spaces, a wide-spaced array technique might be appropriate (see Figure 6). To use this technique, you would space two omni-directional microphones evenly across the front of the area you are recording. You should place the microphones at precisely the same height as the sound source you are recording. Be sure to keep the two mikes at the same distance from the source. Try to keep your microphones no less than three feet apart and no greater than ten feet. However, do keep in mind that the greater the distance between them, the wider the stereo picture. If you go beyond ten feet, the sound will move further left and right and leave the middle sounding weak. This technique creates a wide, airy, open sound with the stereo image sounding more blended and unfocused than the other techniques.

One drawback to all of these stereo techniques that you should be aware of, however, is something called phase cancellation.

When you create a stereo recording, it must be able to play back as a mono signal for those who do not have stereo capability. The mono signal is a combined mix of the stereo signals. For proper mono translation, the two channels should peak and dip at the same time. Improperly, the mono mix has identical audio signals on separate channels that slip 180 degrees out of phase from each other. In other words, when channel A’s waveform is at its peak, channel B’s waveform is at its nadir. The effect is simple: a peak plus a nadir cancel each other. This cancellation can cause the mono signal to be incomplete and weak or to have no sound at all. For this reason, it is very important to listen to your stereo mix in mono to make sure that it translates well.

Whatever technique you decide to use to record your stereo images, remember to use your headphones while shooting and listen to the recording in both stereo and mono. Mix your left and right channels onto a single channel and see if it still sounds correct. Using these techniques should help you enhance your productions and create a richly textured, professional stero sound.