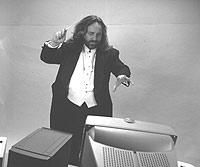 At some point in your career or hobby, you’re probably going to find yourself in a quandary where music is concerned. The situation may unfold something like this…

You’re doing a video that’s turning out great, and you want some top-quality music to add that finishing touch. Hoping to show your masterpiece beyond the walls of your own living room, you know better than to lift a few favorite tunes from your CD collection. You’ve used every song on your sole buyout music CD several times, and none of its music has the feel or mood you’re looking for.

What to do? You could track down a musician or band to record, but there’s no guarantee they’ll perform up-to-snuff or have any songs you’ll like. You could try to secure licensing for some popular songs, but that road can be long, bumpy and expensive. You could purchase a new buyout CD or library, but you’re still taking your chances on finding music that really works for your video.

If it seems that there’s no real solution to the music problem, don’t despair. The answer may be to let your computer create the music for you. Not just any music, though, music that is the right length for your scenes, has the right feel, is royalty-free and actually sounds good. Believe it or not, there are software packages available that can work this very magic with nothing more than a modest computer and an inexpensive sound card.

Soundtrack in a Box

As complex as music may seem to those without musical training, it usually follows a number of set rules. Only certain notes work in a given key, certain rhythms mesh together nicely, and there are common musical structures that make sense on a larger scale.

Certain types of music creation software use these rules and patterns to generate chords, melodies and rhythms. However this type of software would cough out the same tune every time you pressed the PLAY button, so the software designers allow you to control many variables in the creation of the music.

In most cases, you can select what style of music you want from a broad range of music templates, pick the tempo, decide how long your music should be and pick the instruments used in your virtual band. The software then randomizes certain aspects of the music to keep every song from sounding the same. At least one software package will create a whole song for you in less than a second, add a solo melody on top and suggest a title for the tune.

This type of software package uses the MIDI (Musical Instrument Digital Interface) standard to communicate with your computer’s sound card. The software itself doesn’t create any sound. Instead, it instructs your sound card as to which notes to play on which instruments. The resulting music exits your sound card and you hear it on your speakers (or headphones).

MIDI music creation software has the benefit of infinite flexibility. With little human intervention, these packages can turn out countless thousands of unique songs in hundreds of different musical styles. You can mix and match instruments like changing fonts in a document. You can create endless variations on the same song, with different lengths and "feels" for each. Though a musically-trained ear will usually help create more appealing music, it’s not a requirement.

For all of its flexibility, MIDI music creation software has a couple of drawbacks. The first lies in the fact that every note coming out of the MIDI software is computer-generated. Computers are notorious for generating music that sounds, well, computer-generated. Emotional ex-pression through music is some-thing only humans can pull off, and the lack of any human musicians in a MIDI track can leave it sounding rigid and cold. The more you know about music, the more you can "warm up" this somewhat sterile sound.

The second drawback is sound quality. Because these packages rely on the sound card to create the sounds of various instruments, the final result is only as good as the ears that designed the card. Some sound cards create instruments that are strikingly realistic and full. Others create sounds that are thin, cheap-sounding and one-dimensional. Within a few minutes of installing a music creation software package, you’ll know which camp your card falls into.

Thankfully, this latter problem is relatively easy to fix. The simplest solution is to upgrade your sound card. Newer cards use sound technology vastly improved over cards of yesteryear. Cards using Yamaha, E-Mu and Ensoniq synthesizer chips usually sound very good. Many sound cards (such as the Creative Labs line) even allow you to load in new instrument samples downloaded off the Internet or acquired on disc, create your own instruments and add digital effects.

Finally, you can run the MIDI output from your sound card to an external MIDI tone module. Used by professional studios and musicians, these modules can create instruments virtually indistinguishable from the real thing. For just a few hundred dollars, you can improve the quality of your MIDI music dramatically.

Another type of music creation software doesn’t rely on the MIDI system to generate music. Instead, it pieces together small snippets of digital audio (usually individual four-beat measures) to create a whole song. This allows you to control the "big picture" aspects of the song, including arrangement, length, intro and ending.

The fact that the music is actually pre-recorded is both its greatest advantage and disadvantage. On the plus side, the digital audio can contain any sound, such as virtuoso human musicians, well-recorded acoustic instruments, sound effects or vocals. The introduction of human musicianship and expression can spell the end of the stale, computer-generated feel of MIDI software.

On the downside, using pre-recorded digital audio greatly reduces your flexibility as a song designer. You can use only the audio provided, which may not offer the variety or types of songs you need. In this sense, these software packages are much like a buyout music CD where you can select smaller chunks of audio to create the arrangement you want. The result usually sounds great, within the limits of the musical styles and variations provided.

With either type of software package, the end result is a snappy tune playing out of your computer’s speakers. But how do you get that music into your video?

Many software packages (especially the digital audio variety) will create a new digital audio file for you to use. You can usually specify whether the final file should be mono or stereo, what sampling rate to use, etc. (Stick with stereo, 44.1kHz and 16-bit.) You can then drag your new music file into your nonlinear editing software and begin editing like usual.

MIDI software may not perform this mixdown step for you, because the soundcard is actually generating the individual notes instead of just piecing together existing digital audio files. If this is the case, you have several options. One is to use your sound card’s mixer software to route its MIDI audio output back to its input, then use digital audio recording software to capture the song. If your sound card won’t loop output to input internally, you can patch your soundcard’s output back to its input with a mini-stereo splitter cable. Be careful to not monitor the soundcard’s input, or you’ll get feedback. Then, just record into your computer as usual.

If all this computer finagling seems like too much work, there’s a simpler solution. Just take your sound card’s audio output and run it into a camcorder, VCR or cassette deck. Record your song just like you would any other audio source (a CD, for example). You can then use the audio in a traditional linear editing system, or load it back into the computer through the nonlinear capture software with which you’re familiar.

Using computer software to generate your own music does more than just sidestep copyright hassles and buyout library searches, it can even save you money. Some music-creation titles are available for less than $100, and will create an endless supply of new, free music for your videos (see sidebar for more details).

If you have musical abilities, don’t forget that you can easily record yourself singing or playing along with any music you create on your computer. Load the finished mix back into your computer if it’s not already there, and fire up any of the many affordable multi-track digital audio recording packages available. You’ll add even more of a personal touch to your videos.