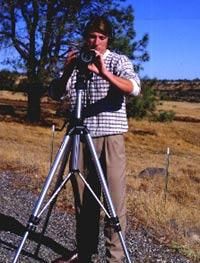 When it comes to capturing great audio, you’ve probably heard about the challenges of shooting indoors – troublesome acoustics, unwanted noises, etc. But what about the outdoors? Does freeing your camcorder from enclosed spaces spell the end of audio troubles?

Not at all. There may be more pitfalls awaiting the unwary videographer outside the sanctity of four walls. It's a tough world out there, one where you have to use your head, and your ears, to capture great audio.

If there's one thing you can say about the great outdoors, it's that they're big. In most cases, you'll have all the room you need to set up any kind of shot. You can use that long zoom lens to put hundreds of feet between you and your subject. That's fine, provided you don't plan on getting any usable audio from such a shot. The heady spaciousness of the outdoors encourages shooters to flaunt the number-one rule of audio, which is to get the mike close to the subject. The closer the mike is to the subject, the more crisp, powerful and up-front the resulting audio will be.

Indoors, sounds careen off walls and other surfaces to create reflected sound or "reverb." A distant mike placement means the sound coming directly from your subject (the sound you want) is competing with all this reflected sound. Moving the mike closer to the subject increases the volume of the direct sound relative to the reflected sound, and puts an end to distant and indistinct audio.

Those of you who know your sound waves are probably saying, "Wait a minute, there’s no reflected sound outdoors!" Right you are. But mike-to-subject distance is still your greatest enemy, just like when shooting indoors.

Outdoors, direct sound isn't competing with bouncing sound, it’s competing with other unwanted noises. As your camcorder gets more than a few feet from the subject, its mike starts picking up such noises as a jet overhead, a lawnmower three houses down or Jethro Tull on the radio with as much intensity as the desired sound.

Even if you are far from roads, houses and oldies radio, unwanted noises are a problem. Most camcorders, when presented with near-silence, get bored and begin recording themselves. Hence, your camcorder's built-in mike may start picking up the whir and hum of motors from within its own case, or the sound of your fingers pressing buttons. The farther you are from your subject, the more inclined your camcorder will be to create its own soundtrack.

Too great a distance between mike and subject impacts your sound in another way. As sounds move through the air, higher frequencies dissipate and scatter as a function of distance. This means the further you get from your subject, the more dull and low-fi it sounds. The crisp, articulate high frequencies you pick up a few feet from a speaking subject are pretty much gone by 20 feet. At 100 feet, you're getting sound more like that of an AM radio or telephone. This is another principle that makes distant subjects sound, well, distant.

For all these reasons, the external mike is the tool of choice for improving your audio outdoors. When you have a specific subject – usually a speaking person – that you want to dominate your soundtrack, nothing works better.

External mikes fall into two camps, namely wired and wireless. Both are very useful when shooting outdoors, and the well-equipped videographer should probably have one of each.

A wired handheld or lavalier mike is great when shooting a more-or-less stationary person from closer than 20 feet away. The mike cable can sit happily on the ground, delivering that up-close sound with a minimum of fuss and expense. Provided you're careful, the mike cable can even span the space between rooftops or cross through the water of a small creek or stream.

Throw in the need for greater mobility or distance, and the wireless mike becomes the best solution for outdoor shooting. With a belt-pack or handheld transmitter, a human subject is free to roam without the distraction (and potential danger) of a mike cable.

Wireless mike systems usually perform best outside, where they're free from walls and the wires they hide inside. A wireless mike that starts having problems at 40 feet indoors may give you clean audio for 300 feet outdoors. Note that interference from other sources of RF (radio frequency) energy still pose a problem outdoors. This list can include high-power CB or HAM radios, radio towers, nearby power lines, etc.

The value of a wireless mike goes far beyond just the speaking human subject. You can stash your wireless transmitter near a subject of any kind to get up-close audio, even if you're shooting from 150 feet away. Put it in the bushes near an animal cage at the zoo, or near a splashing waterfall on an otherwise-silent brook. Lay it near a swingset to record kids playing in a playground. Once you begin to think of your wireless mike as a versatile, remote "ear" for your camcorder, you'll find countless uses for it.

Are there times when an external mike is not really needed for outdoor shooting? You bet. Your camcorder's mike is well-suited to picking up a general wash of background sounds. These include crowd and announcer sounds at a sporting event, the roar of engines at a race, the chaos of traffic and voices in a busy city and other such aural "backgrounds."

Though background noises can be the greatest challenge to the outdoor videographer, they're also your best friend. Why? Because it's these indistinct, jumbled sounds that really give your video a sense of place. What we hear effectively tells us where we, and sound alone can convince the viewer that action is occurring somewhere it really isn't.

If you shoot with external mikes close to your subjects, you don't get much ambient sound. Purposely recording some ambient sound and adding it into your video nets you the best of both worlds: crisp, up-close audio from your subject, and a nice wash of ambient sound in the background. Ambient sound is also handy for smoothing over a tricky edit or adding realistic background sound to narration or dialog recorded after-the-fact.

When you move your camcorder out from the safety of enclosed spaces, you have another variable to deal with: weather. Something as seemingly innocent as a gentle breeze can pose a serious challenge to your camcorder's audio system, and more severe weather can put a shoot on hold.

The most common weather problem you'll face is wind. When it blows across your camcorder's mike, the buffeted mike generates a rumbling roar of noise. This noise is predominantly low-frequency in nature, and a camcorder's wind setting (if it has one) tries to compensate accordingly.

Most wind settings electronically eliminate all low frequencies from the sound. While this may reduce the bass rumble of wind noise, it has two major drawbacks. First, this approach kills the bass and fullness of your desired sound, resulting in thin, tinny voices and music. Second, wind noise isn't just low-frequency in nature; it can stretch well up into the middle frequencies, especially into the human voice range. With a bass-cut filter engaged, this higher-frequency wind noise still comes through loud and clear.

There are several potential solutions for controlling wind noise without engaging an electronic wind filter: