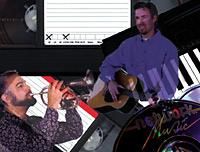 Though you may have never thought of it as such, music is a powerful force. It’s an integral part of every culture and people group on this planet, being used to comfort, entertain, inspire, relax, unnerve and even intimidate.

The movie industry is very familiar with the power of music, sometimes spending millions of dollars of a given film’s budget on the music alone. Movie directors search out the perfect piece of music to enhance a given scene, hoping to engage the viewers’ emotions more completely from opening titles to closing credits. Movie soundtracks are among some of the best-selling albums of all time.

If you doubt the role music plays in movies and videos, watch a favorite movie with an ear tuned to the music itself. Listen to how the music ties the movie together, responding to and enhancing the actions and emotions seen on the screen. When music and on-screen action jive, most viewers will feel the desired emotion without even a hint of resistance. As we said–music is a powerful force.

With a little work and some ingenuity, you can harness the emotional power of music in your own videos. Even simple productions–a 40th anniversary retrospective, five-minute movie spoof or documentary of a weekend camping trip–can benefit from music. Done well, music will improve your videos and make them considerably more enjoyable to watch.

Adding music to your videos practically puts your finger right on your viewer’s mood buttons. Your video’s music can punch up tension, excitement, tranquility, fear and many other emotions.

Though people will respond to a given piece of music in slightly different ways, there are some near-absolutes you can bank on when adding music to your video. Here are some specific emotions that music can enhance:

It’s worth noting that using the "wrong" music in a given scene can have a powerful emotional impact as well. The juxtaposition of peaceful, soothing music during a bloody war scene can make the carnage seem all the more horrible and surreal. Putting fast-paced music with a lazy scene can slow the apparent action due to the contrast between what the viewer is seeing and what’s being heard. Don’t be afraid to break the rules if the wrong piece of music seems right.

Now that you’re recognizing the power music can have in your own productions, where do you get it? There are several places you can acquire music for your videos, the appropriateness of each hinging largely on how widely you plan on distributing your video.

If you’re making a video for family and friends to watch, you’re safe enough taking music from a favorite CD or soundtrack. The copyright police have much bigger offenders to catch, so videos made for personal, not-for-profit use are of little interest to them.

If you have higher hopes for your video, the rules change a bit. If you’re hoping to sell, broadcast or show your video publicly, you’ll want to avoid the music in your audio CD collection unless you actually secure the proper rights to use it. To do this, you have to contact the music’s publisher as well as the performer(s) who recorded the music. Licensing fees for small-beans independent videos are rarely much, but $75 here and $200 there can add up rather quickly.

Thankfully, there are plenty of other places to secure affordable music. Buyout music libraries are designed and produced for people like you, allowing you to use any of the music on a CD (or CDs) for a reasonable one-time cost. Some buyout libraries cost as little as $20 or $30 per CD, and you can use the music as much as you like. The fine print is different from library to library, so you’ll want to read closely to discern how far your rights to use the music actually go.

Some music CDs go in your computer instead of your CD player, allowing you to control the arrangement and flow of the music. You can select the genre of the music, the length you want and the computer will build a song specifically for your needs. Though better-suited to 30-second ads than 30-minute dramas, these music construction kits can be handy for the home video producer.

As impressive as the home video revolution is, the home music studio revolution is even further along (you may have both). With computers now becoming full recording studios in a box, it’s easier than ever to create your own music. A few years back, computer-based music required a music keyboard or synthesizer to complement your computer. Today, most inexpensive sound cards have a MIDI (musical instrument digital interface) synthesizer right on-board.

If you don’t have any musical aspirations, odds are you know someone who does. Try a local college’s music department if you like the thought of commissioning a music student to make music for your video. Some schools even have full classes devoted to movie soundtracks and audio-for-video. Perhaps your latest project could become theirs.

If you need background music with simple instrumentation, your camcorder and a local musician may be the solution. Find a local artist that makes the type of music you’re after and ask him if he’d like to be featured in your video. Odds are, he’ll jump at the chance for additional exposure and credit.

Meet up in a quiet location that has minimal reverb (echo) and set your camcorder about ten feet away (closer if the instruments are quiet). Record the song then listen back with headphones. Let the musician listen and have him change position relative to the camcorder (or adjust amplifiers) to better balance volumes. Record again. You’ll generally get the best results with acoustic instruments, external mikes and manual audio record levels.

There are a few other issues to consider as you begin adding more music to your videos. When it comes to home-made music, quality really does make a difference. If you’re making or recording music yourself, the emotion and quality of the performance are the most important things. You can’t expect your audience to be moved by your aunt’s JiffyTone home organ on Samba autopilot. Your audience will connect better with a well-played harmonica than a poorly played $5000 musical machine.

Watch your music levels carefully. As enamored as you may be with a given piece of music, it won’t accomplish its purpose if your viewers are straining to hear crucial dialog. Music should enhance the action and dialog it accompanies, not overwhelm it. Remember two important facts when setting music levels: first, you’re probably all too familiar with the dialog and can hear it even with the sound muted. Your viewers, however, won’t enjoy the privilege of seeing each scene 427 times. Second, the natural tendency of most people is to mix the music too loud. Always err on the side of lower music levels.

When your video has the right music at the right time, something wonderful and magical happens. Your viewers will no longer be just watching your video, they’ll be feeling it.