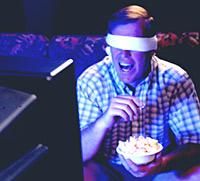 For most of us, it’s all too easy to get wrapped up in special effects, lens trickery and other visual feasts for the eyes. Hey–we’re videographers, right?

But as videographers, we should never lose sight of the fact that audio can draw viewers into a video just as well as visuals can. For proof, rent a blockbuster movie; find a particularly engaging action sequence and "watch" it with your eyes closed. Then, repeat the procedure, but this time with your eyes open and turn the volume all the way down. Chances are you’ll find the audio program to be even more engaging than the visuals alone. Viewers can usually picture what they hear, but they can’t always imagine the sound to accompany the images.

Much of the power of a film or video soundtrack comes from the implication of things or people that aren’t really there, be it an off-screen gunfight, devastating explosion or ambulance siren. Often it’s impractical to record these sound effects while actually taping (or filming), so dubbing them in after you finish shooting is the way to go.

Creating a plausible reality for the viewer’s mind to perceive isn’t the sole responsibility of sound effects. Equally important are ambient sounds. These are subtle sounds that add atmosphere and run along under dialog and other more-dramatic sounds. Though rarely noticed, these sounds create a believable space around the on-screen action. Adding these in after shooting is also more practical, allowing you more control to make creative decisions.

If all this sounds too complex for your productions, take heart. Adding sound effects and ambient sounds isn’t as hard as you might think.

This month, we’re going to explore using audio to really engage your viewers. Then we’ll review the actual process of dubbing new audio into your videos.

At this point, you may be wondering why a videographer would bother dubbing in subtle ambient sounds instead of just videotaping where these sounds naturally occur. The most obvious reason is that you may not have access to a locale where the sound you’re after naturally occurs.

The most important reason is control. Only when you add audio in post-production–after shooting all your footage — can you really control the way it sounds. When you dub, you can control the volume, tone, length and other characteristics of your off-screen sounds. Imagine trying to record the dialog between your key characters as a real subway train roars by. Dub this sound in later, and you can make sure the ambient sound or sound effect doesn’t drown out crucial parts of your soundtrack.

In reality, the couple was running through a silent corridor before going into a silent room. They shouted at each other for effect, then jumped back into the silent corridor. Someone added all the engine sounds later, carefully increasing the volume as the couple ran along. When they opened the door, the deafening engine sounds jumped to full-tilt.

The same thing works in a less-dramatic way any time someone is supposed to be in a moving vehicle. Want the viewer to believe action is taking place on a train? Add in the muted churning and occasional clack-clack of the wheels. A low rumble places your action on a luxury liner or space ship. A high-pitched whine and muted whoosh of air help complete the illusion that your talent is on a jet.

With the magic of adding audio, you could shoot this scene on any balcony in Sleepytown, USA. Simply add in some generic French restaurant babble and European-sounding street noises (especially the telltale sound of a European police siren), and the illusion is complete. Adding audio later does more than just make the actual shooting location a moot point, it also ensures that no competing sounds threaten the clarity of the woman’s phone conversation.

What the viewers don’t know is that the party ended before the reporter was able to get his lines right. The sound of the crowd, which was recorded by a smart camera operator while the reporter was re-thinking his report, was added in post.

Recording believable background sounds is easy–your camcorder is doing it all the time. All you need is a new mindset; one that’s constantly listening for intriguing sounds that could be useful in a future soundtrack. If you ride a steamboat at a theme park, stand right by the engine and record a few minutes of its sound. Walk to the bottom level of a stadium and point your camcorder back at the crowd to record the cheers and chatter of a sporting event. The goal is to get several minutes of unbroken, pristine audio.

Log these sounds like you would your video, listing tape counter numbers and type of sound. You’ll appreciate being able to track these sounds down easily if you need them. While you’re at it, think about other places you’ve shot with your camcorder. You may be able to go back through your old raw footage and harvest all kinds of great sounds. Remember when you shot several minutes of video at a construction site down the street? That footage holds potentially useful sounds, if you need to stage some action in a noisy construction area.

With a little resourcefulness, there are very few sounds you can’t find or create yourself. A buy-out CD library should hold any sound that eludes you.


The concept of adding new sound to your video is simple, though the process differs slightly, depending on your equipment. First, we’ll talk to those folks who are doing traditional linear editing.

For starters, find out if your video equipment will allow you to audio dub. Many VHS-family VCRs and camcorders are capable, while only the few Hi8 units with PCM digital audio can audio dub. Most DV decks and camcorders will let you add new audio, provided you shot the footage in the 4-track 12-bit audio mode rather than the 2-track 16-bit mode. If this doesn’t ring a bell, consult your manual.

It makes the most sense to dub fresh audio to your master tape after editing. This way, the audio stays consistent from edit to edit. Simply attach your camcorder, CD player or cassette deck to your VCR or camcorder, either directly or through an audio mixer. Cue up both tapes, and start playing your audio source just before starting to audio dub on your recorder. Stop both when you get to the end of the section you’re dubbing.

If you use a computer for nonlinear editing, you’ll have it much easier. After you capture the new sounds into your computer, you can then layer several audio tracks onto your video. You can change audio levels smoothly or quickly, even adding a little equalization to change the tone of the sound.

Perhaps the handiest feature of computer-based audio is the ability to loop a shorter sound so it continues for as long as you need it to. For most sounds, you only need 30 seconds to a minute for looping. With mechanical sounds, you might be able to loop a piece of audio just a few seconds long. Experimentation is the key.

Adding fresh audio elements to your video is more than just an effective means to communicate your message–it’s also great fun. Once you add in that perfect sound that really makes a scene, whether from your camcorder or off a CD, you’ll be hooked.