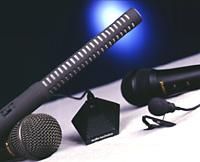 Though convenient, your camcorder’s built-in mike is rarely the best mike for the job. When you want optimum sound, you need an external mike. In this article, we’ll explore how external mikes work, how they differ, and how to best apply them in your videos.

When Smaller is Better

One of the most effective external mikes you can use also happens to be the smallest, called a lavalier or "lav" for short. Videographers often pin it to their subject’s collar, capitalizing on the most important sound recording principle going: get the mike as close as possible to the subject.

A close mike placement subdues background noise and makes your subject sound fuller. It also gives your camcorder a much stronger audio signal to work with, which helps reduce electronic noise and hiss. More than physical construction or electrical design, the distance between your mike and your subject is the key factor in sound quality.

The lavalier sits so close to your subject, it doesn’t even have to be directional to block out competing noises. Hence, many lavalier mikes are omnidirectional, meaning they pick up sound equally from all directions.

For really noisy environments, a directional lav will perform even better. Directional lavalier mikes are becoming more common (and cheaper) these days. A good wired version will set you back less than $200. There are bargains out there as well, with some great-sounding models available in the under-$100 price bracket.

Using a lavalier mike is as simple as getting it nice and close to your subject’s mouth. If your subject will be looking down while talking, move the lavalier mike to the side to avoid breaths and other blasts of air. Don’t place it underneath clothing unless you absolutely have to, as the layers of fabric will dull the sound.

Use your headphones (you are using them, right?) to check for unwanted rustling of fabric, breath pops or clunks as your subject inadvertently bumps the mike. Because it’s right on the body, the tiny lavalier mike is prone to these kinds of problems.

You can take advantage of the lavalier’s small size, and apply it in many other creative ways. Want good audio without a visible mike? Find some place near your talent to stash a lavalier mike. Try putting it in the plant near your subject, or hide it behind the card file on a desk. With the tiny lavalier, the possibilities are endless.

Hold it In Your Hand

The handheld mike is a familiar sight on television, as we see virtually every news reporter, singer or speaker holding one. It can get even closer to the mouth than the lavalier, which helps deliver a full, crisp sound.

Handheld mikes use a much larger diaphragm (the ultra-thin membrane that turns sound waves into an electronic signal) than the lavalier mike does. This allows them to put out a stronger audio signal than the lavalier, which usually translates to less hiss from your camcorder.

Good handheld mikes are designed for rough treatment. They have a heavy, stiff barrel to help reduce handling noise. Most handheld mikes also suspend the sensitive element in rubber inside the mike, to protect and isolate it from noisy bumps. A foam pop filter under a layer of metal mesh completes the handheld mike’s armor, reducing the loud thump that accompanies the frequent blasts of air that come from the mouth.

Most handheld mikes are directional, which makes their orientation relative to the mouth important. If your subject is waving the mike all around, your audio levels won’t be consistent. It’s much better to hold the mike still four to 12 inches from your subject’s mouth.

Remind your subject that while conducting an interview, the mike has to be pointing at whomever is speaking. It’s also important to maintain a consistent distance between mike and mouth as the mike moves back and forth between interviewer and interviewee.

Like the lavalier, the handheld mike isn’t only limited to up-close miking. Try pointing a handheld mike into the action from just outside the shot. If it’s closer to your subject than your camcorder is, a handheld mike will probably deliver better sound.

Manufacturers assume an instrument mike will stay on a mike stand, so they rarely equip it with all the amenities of the handheld mike. The handle may not absorb shocks and bumps as well, and the element itself may not be floating on a cushion of rubber. Finally, the instrument mike doesn’t have effective pop or wind protection. You can tell most instrument mikes at a glance, as they don’t have the large, metal mesh ball that characterizes the handheld mike.

Instrument mikes have many applications in video. An instrument mike can be handheld effectively, provided your subject is careful to not bump it or blast it with air directly from the mouth.

Because instrument mikes are usually a little smaller than their handheld brethren, they’re easier to hide in the shot. They’re also perfect for holding just outside the frame, on a device we call a "boom."

Though not a mike type per se, the boom mike is a staple of video production. A boom is nothing more than a long pole designed to hold a mike near the action but outside the camcorder’s view. Good boom poles change length easily, have clips to hold a cable and elastic bands to isolate the mike from shocks. Workable booms may have a fixed length pole, dowel or broom handle, no clips and plenty of gaffer’s tape to hold the mike.

In other words, a boom doesn’t have to be pretty or expensive to work. It simply needs to allow a boom operator (also called a "volunteer") to hold the mike as close to the subject as possible without ending up on-screen. In addition to the broom handle, functional booms include a mike stand with its base removed, a billiards cue, a heavy fishing pole, a closet hanger rod or dowel and a shower curtain pole to name a few. The list of suitable boom poles is as long as the guerilla videographer’s creativity.

In most cases, a directional handheld or instrument mike is the best choice for boom use. You can use a shotgun mike on a boom (more on this later), or even a lavalier taped to the end of the boom. Remember, good miking is not about what you have, it’s about where you put it.

The shotgun mike got its name because of its long, lethal-looking interference tube. This tube tries to cancel out any sound not coming from directly in front of the mike. Though not nearly as directional as it looks, the shotgun mike is as close to an audio "zoom lens" as we can get.

Mounting a shotgun mike on a camcorder usually results in little or no sonic improvement. The reason is simple–the camcorder tends to end up too far from the subject to get crisp audio, even with a 12-inch shotgun mike attached.

A great place for the shotgun mike is mounted in a mike stand just outside the frame. Point it in at your subject(s) from a few feet away, and you’ll enjoy audio almost as powerful as that from lavalier or handheld mikes.

The last type of external mike we’ll cover is the boundary layer microphone. This type of mike suspends a small mike element just above a large, flat plate. Any sound coming from the mike side of that plate is fair game, giving the boundary mike a hemispherical (half-sphere) pickup pattern. Any flat surface the boundary mike lays on becomes part of the boundary and fills out the sound.

In practice, the boundary mike’s pickup pattern is wide enough to be considered omnidirectional. This means you can forget this mike type when there’s any noise competing with your subject.

Outfitting your video rig with an external mike or two isn’t difficult or expensive. In almost every case listed above, you can get a quality mike for less than $100.

And when you hear the improvement one crisp C-note will make in your audio, it will sound like a million bucks.