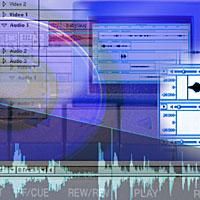 In the same way a computer will revolutionize the way you edit your video, a nonlinear system will turn your audio world upside-down. Digitizing your audio with a computer gives you a great degree of flexibility and power, and opens possibilities unavailable to the traditional linear editor.

All that power comes with a small price, however–you have to learn how to best use it. And though the basic concepts of nonlinear audio editing are the same as those of linear editing, the approach can differ quite a bit.

This month, we take a look at 10 tips for harnessing all that processing power bottled up inside your computer.

1. Mind your rates and bits

Most computers give you several sound quality options for digitizing your audio, specifically in the areas of sample rate and bit depth. Though you can change an audio file’s parameters after digitizing, it’s best to pick one setting and stick with it for a whole project. Also, keep in mind that better quality audio translates into more disk space used.

Sample rate controls the frequency response of the audio file, while bit depth controls its "resolution." A sample rate of 32kHz (kiloHertz or "thousand Hertz") is great for consumer video; rates of 44.1kHz (CD quality) and 48kHz may be overkill. A 22kHz rate, though borderline, still sounds good and preserves disk space.

Audio digitized at 16 bits is optimum for video. Using 24 bits per sample is overkill, and 8-bit audio can sound "gritty" and coarse. For sound effects and other low-fidelity sounds, however, the added edge of 8-bit audio can be a plus.

2. Digitize strong, but not too strong


As with any recording medium, nonlinear systems do best with a strong signal. Digitize your audio at as high a level as possible without sparking the "clip" indicators (usually red) on your meter. Though you can normalize a sound after-the-fact to increase its level, getting a strong signal to begin with is always best.

Some editing systems have over-active peak indicators, meaning a brief flash of red isn’t the end of the world. Zoom in on the waveform itself to see if the top or bottom of the peak is really clipped (flattened) as in Figure 1. If you can’t see or hear any clipping distortion, you don’t need to adjust what you’ve already recorded.


Normalizing an audio file brings its level right up to maximum. This usually overwrites the original file, making normalization a "destructive" process (more on this later). If you can’t boost an audio file adequately with a track fader, normalizing may be your only option.

It’s important to understand that normalizing doesn’t add any audio data or fidelity; it simply boosts the level of the file. Because it can actually have a slightly negative effect on fidelity, use normalize only when necessary.

Some normalize functions will show how far they need to boost the signal, a feature you can use to tell whether an audio file is clipped. If normalize says it can’t make the file any louder (or returns "0 dB" as the boost amount), your audio file probably got clipped during digitizing.

If you are performing a destructive process, it’s a good idea to backup, copy or archive the audio file so you can restore it later if you need to. When the permanent compression/EQ/pitch shift you applied doesn’t sound so good the next day, you’ll be glad you can restore the original file to the way it was before.


When splicing two sections of audio together, try a short crossfade instead of a straight audio "cut." It’s usually easiest to do this with the two sounds on separate audio tracks. Drop the volume of the first track over a short period (3-10 frames is plenty), and bring up the volume of the second track over the same period. The result is a seamless transition that keeps any background sounds or ambience at a constant level.

A sharp edit is often noticeable to the ear, and may cause a loud "pop" if it occurs mid-sound. An edit that fades to silence and back up is also hard to hide, as the background sound dies away for a moment.


As you’ve probably noticed by now, real-world sounds tend to alternate between being too loud and too soft when recorded. Compression is a process that reduces the difference between these loud and soft portions of your soundtrack. Many nonlinear systems will apply compression as an audio "filter" (an internal audio processor), usually as a destructive process.

Experiment with a threshold setting of around -12 dB, compression ratio of about 2:1 and fast attack and release times. Lowering the threshold or increasing the ratio compresses the sound more; moving either in the opposite direction makes for less compression.

Compression can be tricky to actually hear, but its effects are wonderful. Set correctly, compression will level out your soundtrack and add impact.


A nonlinear system allows you to get rid of unwanted noise by manual or automatic means. A noise gate or "remove silence" filter will listen for quiet sections and reduce their level even further. If you have background noise purring along behind dialog, for example, a noise gate will find those spaces between spoken sections and reduce the volume of any noise present.

If you don’t have a filter to do this automatically, you can perform a similar operation yourself. Simply look at your audio waveform and smoothly drop the volume of that track during silent sections. This is easiest to do with a volume "envelope," which allows you to set volume points that the computer will fade smoothly between. With some practice, you can seamlessly remove those pesky noises that fill every quiet section.

8. Don’t drive your drives too hard


Though some nonlinear systems will allow you to fill up an unlimited number of audio tracks, remember that this really taxes your computer. Your hard drive is trying to read several different audio files at once, as well as keep a steady stream of video data flowing. Playback may stutter and skip, especially if you’re using a computer with a modest memory.

Submixing your audio tracks lets the computer combine all the audio tracks into one (or two if stereo). This lessens its workload considerably, and may insure smooth playback when a video gets complex. If you do submix, remember to keep the individual audio files in case you need to make changes later. Also, keep in mind that…


If you combine a stack of nice, fat audio files, their levels may add up to distortion. If you hear a harsh, buzzy edge (or loud popping) on playback or after submixing, you need to reduce the level of your tracks. Dropping every track by the same amount will keep your audio blend intact–try just 1 dB for starters.

Some non-destructive method is preferred, such as lowering the track faders or adjusting all volume envelopes. If your editor has a "master" fader, you may be able to lower it a few dB to eliminate the overload. If you must, you can drop the level of each sound with an amplify filter and destructively re-write the audio files.


When editing dialog or narration, breaths are nearly as important to creating a smooth flow as the words themselves. If you perform an edit mid-breath, the result is an awkward hiccup in the sound. If, through editing, you eliminate breath sounds altogether, the result can be very unnatural.

The best place to edit the speaking. We humans usually inhale right up to the first word, then there’s a brief pause as the breath reverses and the vocal cords get going. Performing a quick crossfade (or even a straight cut) in this gap will insure a natural flow of speech.


When working on a nonlinear system, try to shake your old approach to editing audio. Instead of being limited by too few mixer input channels or simple two-band EQ, the only limits with a nonlinear system is the computer’s memory and your imagination. Ask yourself, "what would that sound like backwards?" or "what if I blended those two sounds and lowered their pitch?" or "what if I repeated that chunk of ambient sound through the whole scene?"