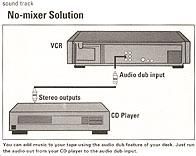 Have you ever been awed by the size and power of a major motion picture’s soundtrack? Ever wondered how directors and sound editors make movies sound so huge? The key is in the layering of sounds. Blockbuster movies may have nearly 100 different sounds blended together at any one time. These sounds include tracks of dialog, ambiences or backgrounds, subtle sound effects, dramatic sound effects, music and more.

There are several ways to mix multiple sources together. The audio mixer is the most obvious. A mixer will combine signals from VCRs, CD players, tape decks, tuners and other components, allowing you to precisely control their relative volumes. A mixer also protects the output circuitry of the components plugged into it, something that connecting gear with Y-cables doesn’t do. Remember–you can (in a pinch) split a single output to multiple inputs with a Y-cable, but never do the opposite. Combining outputs with a Y-cable can damage equipment by sending a signal with a voltage level that’s too high.

There are two types of mixers commonly used for video–the mike/line mixer and the DJ-style mixer. We’ll leave the details of these mixers for another article and go for a good grasp of the basics.

A mike/line mixer is usually best-suited for combining mono signals, such as the output of a microphone or musical instrument. DJ mixers handle signals in stereo, allowing you to adjust both the left and right levels with a single knob or fader. This is more convenient for most pre-recorded sound sources.

How you combine multiple sources depends largely on your equipment. Here’s a quick overview of the steps involved for various types of editing hardware. There are countless possible combinations of gear, so you may not spot your exact setup in this list. What you will see, however, are concepts you can apply to your specific needs. As with most aspects of videography, your success hinges more on your ingenuity than on your gear.


Believe it or not, you can still add some pizzazz to your soundtrack without a mixer. If you have a stereo VCR with an audio dub function, simply add music or sound effects to an available track on the tape. On playback, this new audio will mix with your program audio for a more interesting soundtrack. You can even dub to your master tape before editing, provided you don’t put continuous music across scenes that you’ll edit later. After you edit, you can dub a second time to your record tape (music, perhaps). You’ll have three layers of sound without using a mixer. However, be aware that every time you make a dub to mix tracks, the video and audio quality will deteriorate.

Folks with Hi8 PCM digital tracks or four-channel DV decks can dub stereo sound sources onto tape. Those dubbing to VHS or S-VHS decks can only dub mono sound, but here’s a clever way to turn this drawback into a benefit. Since hi-fi VHS and S-VHS decks have stereo inputs and a mono linear audio track, these decks combine the left and right inputs when dubbing. This means you could plug one sound source into the left input (a CD player, for example) and a different one into the right (say city traffic ambience you recorded on cassette). The VCR will combine these two signals and route them to the mono track. Adjusting the relative level of the two sources is up to you. You may be able to accomplish this by using a variable headphone output from one of the sources.


The benefit of having a mixer is that you can combine numerous sound sources at one time, instead of going through a lengthy series of dubbing/copying steps. If you’ve got enough mixer inputs, sound sources and fingers to press "play", you can stack up a pretty dense soundtrack in no time.

Simply take the outputs from your sound sources and plug them into the mixer’s line inputs. You may need RCA to 1/4-inch adapters, as many mixers have 1/4-inch inputs. Put stereo sources on adjacent channels, and pan one hard-left and one hard-right. (If you don’t pan stereo inputs, you’ll end up with a mono signal.) If you’re plugging in a mono source (narration mike, microcassette recorder, etc.), leave that channel’s pan knob straight up so it will go to both left and right output channels. Route the mixer’s stereo output to your VCR’s audio inputs (you may need two more 1/4-inch to RCA phono adapters).

Next, find a loud section of sound and adjust the mixer’s input trims so the level is just below where the "peak" or "clip" LED (Light Emitting Diode) lights up. This optimizes the signal coming into the mixer; you’ll make all future level changes with each channel’s fader or knob. Bring up the channel faders, and you should have sound. By adjusting the faders for all your input sources, you can achieve a pleasing balance of sound. Mixers with channel faders instead of knobs are easier to adjust mid-edit. You may want to consider this when purchasing a mixer.


The process for combining multiple sources in a DJ-style mixer is similar to that of the mike/line mixer. A few differences: the DJ mixer will accept stereo inputs, usually on RCA jacks. The DJ mixer has no trim control, as most pre-recorded sound sources put out the same signal level.

Finally, some DJ mixers won’t let you combine more than two stereo sources and a microphone at one time. This makes sense when you consider the target application for the DJ mixer–it’s rare that a DJ has two stereo sources audible at once unless during a crossfade between songs. You can use a mixer like this for video mixing, but you’ll have to set the relative level of the two sources with the crossfader.


Computer users have it easy. Once they’ve digitized their sounds and music, they simply stack it on the timeline. Some systems allow level adjustment on a track-by-track basis, which affects the balance for the length of the movie. The more flexible systems allow you to change track levels by moving a line in the audio window.

The benefit of this system comes with the ability to make automated level changes mid-video. If you want an ambient sound to fade up during a dissolve transition, you simply draw a diagonal line in the track’s level window. If your music bed needs to come up during a lull in the narration, you can make a smooth transition to and from the higher level.

This automation also reduces the human error element. When you’re trying to remember and set fader positions during a long edit, the potential for slip-ups is great.


When mixing multiple sound sources for your video, here are some common pitfalls to avoid: