Home How To Audio
Kara pulled an all-nighter editing a year’s worth of memories for her company’s
New Year’s eve party. When it came time to play the video on the company’s
projection TV system, Kara experienced a rude awakening–nothing sounded
right. Voices that seemed clear when she edited were garbled and indistinct.
Her music, routed to tape through an inexpensive mixer, was nearly drowned
out by a loud hum. Her husband’s voiceover commentary came booming out of
the speakers at an uncomfortable level. Worst of all, the CEO’s congratulatory
speech sounded so bad that it prompted chuckles from several of Kara’s co-workers.

Kara learned the hard way that it is extremely important to have trustworthy
speakers when you are making crucial decisions about your audio. Kara trusted
the tiny speaker from her $150 TV. Instead of telling her the truth about
her soundtrack, it obscured the details she needed to make good decisions
about relative levels, equalization and the like.

There are two main performance factors that separate good speakers from
bad: breadth and uniformity of frequency response. Breadth quantifies how
high and low in frequency a given speaker will go. The human hearing range
covers the span from about 20 Hertz (Hz, or cycles per second) to 20,000Hz
(figure 1). The closer a speaker comes to covering this full range, the
better. Frequency response is one of the few speaker specifications manufacturers
commonly print.

Even more important, however, is the uniformity or smoothness of a speaker’s
response. If a speaker puts out a lot more volume in a certain band of frequencies,
sounds that occupy this area will appear louder on playback than they really
are (figure 2). If a speaker has a peak in the human voice range (which
sits right in the middle of the spectrum), you may think you’ve mixed your
narrator plenty loud above a music bed. Play your tape back on a truly "flat"
system, however, and you may discover that his voice is actually buried
in the music. Unless a manufacturer prints a frequency response chart, there’s
no way to know how smooth and even a speaker’s response is without listening
to it.

In this column, we’re going to check out some of the more popular monitoring
options used by videographers. And while performance can vary wildly within
a given class of speaker, there are generalizations we can make. Some of
the monitoring options we’ll discuss are as trustworthy and reliable as
an old friend, others are veritable masters of deception.

Expensive video monitors and cheap TVs have one thing in common: they often
contain notoriously unreliable speakers. Tacked on almost as an afterthought,
these speakers aren’t much larger than those found in full-size headphones.
This is the type of speaker that helped Kara botch her soundtrack.

These speakers are so bad because their frequency response is both limited
and very uneven. Their limited range means they’ll completely ignore moderately
low and high frequency sounds. A low 60Hz hum from a power cable might be
completely inaudible when listening on a tiny speaker, as would large quantities
of high-frequency tape hiss. These little speakers rarely even cover the
human voice range–they may be cutting off fullness on the bottom end and
clarity on the top.

Little speakers don’t perform so well in the evenness area, either. Their
response is usually riddled with peaks and dips, imperfections that make
it impossible to perform critical adjustments to your audio. These speakers
are good for making sure you actually have audio on tape, but that’s
about it.

Standard television or A/V monitor speakers are better. These are usually
larger and cover a broader range of frequencies than cheap monitor speakers.
These speakers often do justice to the human voice, and may reproduce music
with reasonable fidelity. Response is usually smoother than with smaller
speakers, though a buildup of the lower mid-range frequencies is common.

Because many televisions use speakers firing out from the side of the cabinet,
sound can be a little lacking in the more-directional traveling high frequencies.
One solution is to secure flaps at a 45-degree angle over the speakers to
direct the sound forward.

More and more TVs include stereo speakers as well. These will allow you
to hear both left and right channels of audio at the same time, but don’t
really offer the accuracy required for critical stereo production.

Multimedia speakers, like those included with many computer sound cards,
offer widely varying performance. Some sound as bad as tiny monitor speakers,
while others offer accuracy more on-par with large television speakers.
Most multimedia speakers are far too small to generate much bass, but some
do offer good high-frequency reproduction. The exceptions are those self-powered
systems that include subwoofers, which generate more than enough bass for
video production.

Though they offer the advantage of pointing right at you, the response of
most multimedia speakers is pretty uneven. Unless you’re reasonably certain
your multimedia speakers are giving you a true picture of your sound, you
may want to leave them attached to your computer.

The "boombox" represents one of the best audio monitoring options
for the videographer on a budget. Systems with larger, detachable speakers
usually offer fidelity far better than that of even an expensive television.
You can position the speakers for optimum sound and stereo imaging, placing
the main part of the stereo in a convenient location. Portable stereos have
built-in amplifiers, and many have built-in equalizers that can help overcome
limitations in the speakers’ response.

Portable stereos usually have pretty broad responses, with a tendency toward
hyped bass and treble output. If a boombox sounds very rumbly on the bottom
end or too "fizzy" on top, it may not be the best choice for video
monitoring. Try to find a model with a clearer sound.

Small home stereo speakers usually offer good fidelity from a very compact
box. These speakers are often two-way designs, with separate drivers handling
bass and treble frequencies (figure 3). If you have an amplifier sitting
around (or can attach these to a television’s external speaker jacks), these
speakers are a great solution for video production. Self-powered systems
with a subwoofer also work well.

Related to these speakers are the small audio monitors designed specifically
for video and multimedia production. Usually magnetically shielded so they
don’t bother your video monitors, these speakers are even more trustworthy
than home stereo speakers.

Though these may offer the best fidelity of all your options, most people
just don’t have the room for large home stereo speakers. Cramped quarters
often mean putting these big speakers against a wall, where they rarely
sound their best. Many inexpensive full-size speakers also have an accentuated
"boom and sizzle" response that makes them a questionable choice
for video.

Like every other monitoring option, headphones run the gamut from excellent
to truly horrible. Larger, more expensive headphones are usually the most
accurate. Designs that cover the ear are the best choice of all.

Though they’re far better than relying on a lousy speaker when editing audio,
headphones have a hidden danger: they can sound too good. The ultra-detailed
sound of many headphones can trick you into thinking your audio sounds better
than it does. Remember that most people won’t be watching your video with
headphones on, so be careful when relying entirely on phones for production.
For tracking down problems with your audio, however, headphones can’t be
beat.

In closing, here are some tips for getting the best sound out of any monitoring
system:

1) The poorer-sounding or noisier a room is, the closer you should be to
your speakers. Just as when you’re recording audio with a mike, this will
help minimize competing noises and unwanted room ambience. Got a really
bad monitoring environment? Use headphones.

2) If you have equalization for your speakers, listen to some favorite music
and adjust the EQ until it sounds right. This will "calibrate"
your speakers for optimum accuracy.

3) Don’t place speakers right against a wall. This causes a buildup of bass
and mid-bass frequencies, potentially making everything sound muddy and
dark. Pull speakers out at least 18 inches from the nearest wall, if possible.

4) Position stereo speakers so the left speaker, right speaker and your
head are at the corners of an equilateral triangle. In other words, you
want the same distance between the speakers as between your ears and each
speaker (figure 4).

5) When you think your soundtrack is perfect, listen to your tape on as
many other audio systems as possible. Each will give you a different perspective
on your audio. 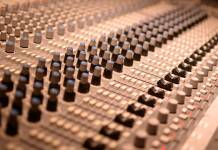