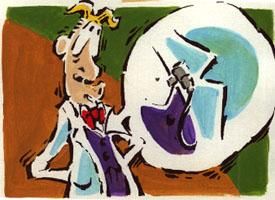 Greetings, students. During this class period we’ll be taking a closer look at the sometimes peculiar characteristics of Microphonicus Videus, or the video microphone. A solid understanding of how mikes interact with their environment will aid you in your dealings with these creatures, and will help you apply them toward better-sounding video productions.

When using your first camcorder, you were no doubt impressed with the ability of its lens to zoom in on a distant subject. Some camcorders have optical zoom ranges that make them work almost like a telescope, focusing attention on a very small area. Unfortunately, microphones don’t work this way.
Because of the way sound behaves, no mike can concentrate on a subject the way a lens can. Even a highly directional shotgun mike (with a long, slender barrel) picks up sound over a roughly 60-degree swath. Compare that to a zoom lens’ ability to hone in on just a few degrees worth of real estate in front of it. Even so-called "zoom" mikes pick up sound over a relatively broad range.

The most common microphone pickup pattern is called "cardioid." Its pattern is roughly heart-shaped if viewed from the side of the mike. This type of mike is dramatically less directional than a shotgun mike, picking up sound over an angle of roughly 130 degrees. In other words, the average microphone is picking up sound at an extreme wide angle setting all the time.

Imagine if your camcorder had no zoom lens, and was always shooting at a very wide angle. If you wanted to reveal the details of a painting, show the viewer some text on a sign or get a good look at someone’s face, you’d need to move the camcorder very close to your subject. Only then would your subject fill the screen. So it is with the microphone.

Which brings us to the most important principle of good miking: get your mike as close as possible to your subject. Your camcorder may be able to get a nice, tight shot of your subject from 30 feet away. At that same distance, however, your mike is picking up every sound and noise in the vicinity. The end result may be a subject that looks close enough to touch, but sounds like it’s miles away.

Mikes Love to Roam
As we just learned, the best distance for capturing video is almost always too far away to record good audio. Yet your built-in mike, being attached to the camcorder, can never be any closer to the action than the lens is. This virtually guarantees distant, indistinct audio.

If you use a mike that’s free to roam from the camcorder–an external mike–you’re no longer forced to record audio from so great a distance. You can get an external mike within a few feet (or a few inches) of your subject for crisp, clean audio. If you’re recording someone speaking, you can even attach a small lavalier mike right to them.

Getting a mike off of your camcorder and closer to the action will make a dramatic difference in the presence and intensity of your sound. The mike doesn’t even have to be an expensive one–a $40 mike two feet from the subject will almost always sound better than a $400 mike 20 feet away.

External mikes come in several varieties, including hand-held, lavalier (for attaching to someone’s clothing) or shotgun (for distance). You can also get mikes in both wired and wireless versions. Wireless mikes have the advantage of complete mobility without cables, though they can be prone to interference and noise. Not everyone needs a wireless system, and less-expensive cabled mikes still deliver the best sound and most consistent performance.

Mikes Are Dumb
When chatting with a friend in large crowd of people, our brains have the ability to screen out background noises and home in on a single voice. A microphone isn’t so clever. Instead, a mike in the same position will pick up noises and voices equally, blending them into a nearly indistinguishable mess. On playback, the viewer’s brain will have a hard time hearing the speaker’s voice through the din of the background noise.

Once you understand that microphones aren’t the most intelligent creatures, you will know to compensate for their lack of discernment. You do this by getting the mike as close as possible to the subject, making it appreciably louder than the competing sounds. Sound familiar? It should–getting close is the golden rule of miking. The dim-witted nature of Microphonicus Videus is just another reason that closer is better.

You’ve probably already learned that the world is a very noisy place, one that seems to get noisier as you play back your freshly shot footage. On the shoot, for example, your mind quickly screened out and ignored the hum of a nearby refrigerator. The microphone, ever diligent in its job, recorded the fridge faithfully from first line to last. Traffic sounds that didn’t seem so loud when you were shooting become a constant, distracting roar on playback.

Learning to listen like a microphone is easy–you just have to shut off your brain. Before you shoot anywhere, close your eyes and really listen to the noises around you. If you can hear a given background sound, a mike in the same position will pick it up loud and clear. You have three options at this point: 1) find a different place to shoot, 2) eliminate the sound or 3) move the mike so close to the subject that the desired sound overpowers the background noise.

Mikes Like to Hide
Needing to get a mike close to your subject is a given, but what if you don’t want your viewers to see the mike? Thankfully, mikes are very good at hiding under, behind and inside other objects. As far as the camcorder (and hence, the viewer) is concerned, a hiding mike doesn’t exist at all.

Finding a place to stash a mike is easier than you may think. For a shot where two people are talking on a living room couch, try placing a mike behind a plant on the nearby coffee table. Provided they don’t move too much, you could point the mike up at them from between two couch cushions. Hanging a mike from overhead is an option in some locales, simply frame up your shot to keep the mike just out of view. Any object close to the action is fair game for concealing a mike.

A variation on the hidden mike approach is the boom mike, which requires an able-bodied helper to hold the mike just outside the visible frame. You can spend as much several hundred dollars on a special pole to hold the mike, or you can build something yourself from a broomstick or other slender object. The advantage of a boom-mounted mike is its mobility–your boom operator can follow the action for consistent, up-close sound with no mike visible in the shot.

Mikes Like to Hunt in Packs
Sometimes, you’ll get the best possible audio by using more than one microphone. You may need to pick up clean dialog from multiple people, or you may be trying to record a cohesive sound from your favorite garage band. In cases like these, you’ll benefit by allowing multiple mikes to work together.

The primary advantage of multiple mikes ties into our golden get close rule of miking. The only way to pick up numerous sound sources equally with a single mike is to position it some distance away. At great distances, unwanted noises and competing sounds reign supreme. Using several up-close mikes allows you to get even coverage without the great distances.

If you’re using two mikes and a stereo camcorder, you can use an adapter to record both mikes directly into the stereo mike input. If you’re using more than two microphones, you’ll need an audio mixer to combine their signals. Use the mixer to balance the levels of the individual mikes, and run the finished mix into your camcorder.