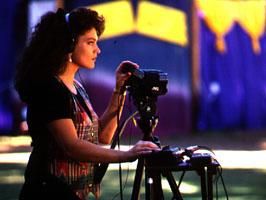 Keep your record clean by avoiding these common
audio crimes.

If you just can’t seem to push your videos to the next level of quality,
you may be looking too hard and not listening enough. That’s right–one
of the keys to making better video is making better audio.

If your goal is to make more effective videos, here are 10 audio mistakes
you’ll do well to avoid:

1. Over-reliance on the camcorder’s built-in mike.

Perhaps the greatest audio crime committed by videographers is relying on
the camcorder’s built-in mike to record audio in all situations. It comes
as a surprise to most amateur shooters that the built-in mike is rarely
the best choice for recording audio.

There are many reasons the built-in mike may do a questionable job recording
audio for your videos. First, you can’t separate the built-in mike from
the camcorder, which is often too far from the subject to record clean audio.
Second, the built-in mike is sitting right on top of a machine full of whirring,
buzzing motors, and some of the machine noise inevitably ends up in the
audio. Finally, the built-in mike is one area where manufacturers can (and
do) cut costs by using lesser-quality components.

Attaching an external mike is easier and less expensive than many people
think, and the potential improvement in audio quality is staggering.

2. Not getting an external mike close enough.

Don’t let the term "zoom mike" fool you–no mike can come close
to the selectivity of your camcorder’s lens. At a tight zoom setting, your
camcorder’s angle of view is just a few degrees. In contrast, a common directional
mike (cardioid pattern) has a pickup angle of somewhere around 130 degrees.
A long shotgun mike, which offers about as tight a pattern as you can get,
covers roughly 45 degrees.

The lavalier mike takes the closer-is-better principle to its logical conclusion
by actually attaching to your talent. The end result is crisp, intelligible,
up-close audio. Are lavalier mikes inherently better-sounding than handheld
or boom-mounted mikes? Nope–they’re just closer.


Auto gain control (AGC) is one of those good ideas that doesn’t work
so well in practice. Its job is to keep a strong (but not too strong) audio
signal going to tape. It reacts to overly loud sounds by quickly reducing
the record level. When things get quiet, AGC slowly creeps the record level
up. The end result is a distracting up-and-down movement of background noises
and tape hiss.

If you can disable the AGC on your camcorder and set record levels manually,
do it. This may require using an external mike, as most built-in mikes go
through an AGC circuit by default. AGC appears on many VCRs as well, and
you should defeat it and set levels manually when editing or copying tapes.

With AGC disabled, you’ll have to watch and compensate for louder-than-normal
sounds. This requires a little extra diligence on your part, but the end
result–background noises that stay put–is well worth it.

Most people know to avoid setting record levels too high, as the by-product
is ugly distortion. Recording with levels too low is more common, and the
effects are almost as bad.

With analog recording, low record levels bury your sound in a blanket of
tape hiss. The end result is muddy audio that lacks detail and clarity.
Though the effects aren’t as severe, low digital record levels can cause
distortion and an overall dulling of the sound. In both cases, the effects
of too-low record levels get worse with each generation.

Setting proper record levels takes practice and a familiarity with your
equipment. If you’re not sure how much signal your camcorder or VCR will
handle, do a test recording. Push record levels until distortion is just
audible and make a note of that level on the meters. With this knowledge,
you can shoot for recordings that sit just below the distortion level.


Using a good-quality external mike to get closer to your subject will
improve your audio. Using an ultra-cheap, bad-sounding external mike will
not.

You can spend as little as $10 for a microphone, and it will probably sound
like it. Avoid mikes clearly designed for karaoke singing or dictation.
These handheld mikes often have permanently attached cables, on/off switches
and a cheap plastic body. These mikes are also high-impedance, which means
they’ll only sound worse as cable length increases.

Stick with professional mikes, many of which are available for under $100.
These usually have balanced, low-impedance connectors with no permanently
attached cable. You may need to pop an adapter or two in-line to make the
mike work with your camcorder (see "Microphone Q&A" in the
October, 1996 issue of Videomaker for more info).

6. Using wireless when wired will do.


Wireless mikes are a great luxury, as they allow your talent complete
freedom of movement. When you don’t need that freedom, however, wireless
mikes can be more hassle than they’re worth.

If your subject is stationary, use a wired mike. This will put an end to
battery, interference and signal dropout concerns, and will usually result
in cleaner audio. One neat solution is the wireless transmitter than attaches
to any professional mike (available from Azden, Nady, Lectrosonics, Shure
and others). If you need wireless mobility, use a transmitter. If you don’t,
you can use a cable with the same mike.

Most videographers think of the lavalier mike as being wireless by default.
It’s not. In fact, a wired lavalier mike may be the most effective (and
least expensive) external mike you can buy.

7. Shooting in bad locations for audio.


We often have some amount of control over where we shoot, and savvy
videographers know how to avoid locations where the image quality will suffer.
Few, however, consider the "aural landscape" of a shooting location.

A good place to record video and audio is free from constant background
noises like the compressor motor in a refrigerator, music from a party down
the hall, roaring traffic or rumble from a nearby air conditioning unit.
Our ears learn to tune these sounds out, but your camcorder will not.

Occasional noises like jets taking off or phones ringing are equally distracting.
If moving your camcorder and subject 20 feet or two miles will eliminate
annoying noises, do it.

When deciding where to shoot, use your ears as well as your eyes.


Though everyone can hear the benefits, few videographers take the time
to add background music, sound effects or ambience to their videos. Instead,
they often let dialogue or narration plod along with no enhancement from
other elements. The result is sterile, unengaging audio.

When editing, spicing up your video’s soundtrack may be as simple as cueing
up a CD or cassette and pressing the audio dub button on a VCR. Those
folks doing computer-based editing may find adding audio elements even easier
than that. Do a little research into how your video gear handles audio dubbing,
and devise a plan for adding other audio elements into the mix.

9. Not using an audio mixer.


An external mike is crucial to good audio when shooting; an audio mixer
is your soundtrack’s best friend when editing. The ways a professional-quality
audio mixer can help your videomaking are numerous. An audio mixer will
allow you to: combine and control numerous sound sources, apply equalization
where needed, cleanly record with professional mikes, plug in headphones,
change the relative levels of several sources at once, do smooth audio fades
and more. (For more on the benefits of the audio mixer, see the April, 1998
Sound Track column).

Contrary to what you might think, an audio mixer is neither expensive nor
hard to master. For just a few hundred dollars, you can pick up a very capable
audio mixer from Mackie, Alesis, Yamaha, Soundcraft, Tascam, Fostex, Peavey
and a host of other manufacturers. The learning curve of an audio mixer
is no steeper than that of a simple video editor.

10. Not caring about audio at all.

This last audio crime may be the most insidious and destructive of all.
Too many videographers think of themselves as image gatherers but not sound
gatherers. They don’t realize that the audio portion of a production packs
as much punch as the video portion. In fact, some argue that the viewers’
emotions are more closely tied to what they hear than what they see.

Taking your audio more seriously isn’t as difficult as it seems, and it
won’t turn you into a headphone-wearing zombie. The method is simple: capture
clean, crisp audio when you shoot, then protect the integrity of that sound
right on through to the final dub.

Sound easy? It is, provided you care about your audio in the first place.