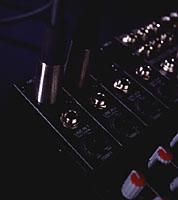 The story of one man, one woman and an audio mixer.


A few blocks apart live Jerry and Julie,
two videographers scrambling to finish their entries in time for the annual
Videomaker/Panasonic Contest. By sheer coincidence, both Jerry and
Julie are making action-filled detective dramas. Both take their videography
very seriously, and both have well-equipped consumer-level studios. Their
main difference stems from Julie’s recent decision to purchase an audio
mixer. Jerry contemplated buying a mixer as well, but decided instead to
buy a new video monitor.

We join the action in-progress, one day before the deadline …


With one day left to complete his video, Jerry cues up a crash sound
effect to punctuate a big chase scene. The sound effect was recorded without
any reverberation on the CD, which doesn’t seem right considering the chase
reaches its fiery conclusion in a large warehouse. With no way to add ambience
to the sound, Jerry dubs the dry effect directly from the CD onto his videotape.
Though better than nothing, Jerry’s sound effect has a tacked-on feel to
it.

Julie cues up the same sound effect, and immediately wonders if the effect
would be a better fit with some reverb added. Her CD player feeds into her
mixer, which has an inexpensive digital effects unit attached. She dials
in a reverb program called "Large Cavern," adds a splash of artificial
ambience to the sound effect and dubs it to her videotape. Her chase, which
concludes in an aircraft hangar, ends with an impressive, sustained "BOOOOOOM!"


Julie reaches an edit where she needs to smoothly fade between two pieces
of music, then immediately adjust the volume level of the dialog from her
source videotape. With the faders on her mixer clearly marked, she can change
the levels of several sound sources at the same time. After a few practice
runs, Julie performs a smooth-sounding edit on the faders.

Jerry comes upon a complex audio edit in his video as well. Without audio
mixer, however, Jerry can’t crossfade his music. Instead, he fades the first
piece of music down with his VCR’s record level controls. Pausing the tape
there, he unplugs his CD player and connects his cassette deck to the VCR.
He restarts the videotape and fades the music back in with the VCR’s record
level controls. After six tries, he still has a long silence between songs,
a small buzz where he paused the VCR, and a not-so-smooth fade-in of the
second song.

Just outside Jerry’s garage, a city worker
fires up a jackhammer. The noise makes it nearly impossible for Jerry to
hear his audio, so he grabs a pair of headphones. Since the only place he
can monitor his audio is at his record deck, Jerry attaches a 1/4-inch to
1/8-inch adapter onto his headphone cord and plugs it into the deck. The
deck has no headphone level control, and the sound ends up being painfully
loud. He perches the headphones halfway off his ear to reduce the volume.
His ears are sore and ringing in 20 minutes.

Julie’s neighbor begins pruning his trees with a
chainsaw, easily drowning out her small speakers. Julie grabs a pair of
headphones and plugs them into her audio mixer. Using the mixer’s headphone
output level control to adjust the volume, she sets a comfortable listening
volume. Julie tucks the excess headphone cable alongside the mixer and continues
working.

Julie checks some music she recorded at a friend’s piano recital, debating
whether or not to use it in her video. She recorded the music on a portable
stereo; the sound is thin and lacking in bass, and also has noticeable tape
hiss. She turns up the mixer’s bass EQ controls on the cassette input channels
to add fullness to the piano music. Reducing the treble EQ controls lowers
the tape hiss to bearable levels. Without affecting any other signal in
the mixer, Julie salvages the piano music and dubs it onto her videotape.

Jerry plans to use a similar piece of music, also recorded with his portable
cassette deck. With no way to equalize the signal, however, Jerry is stuck
with thin sound and lots of tape hiss. He uses the music anyway, hoping
no one will notice the lack of fidelity. "After all," Jerry mutters
to himself, "it’s just music."


Jerry’s friend Tom arrives to record some voiceover narration. Tom brings
a high-quality vocal mike he uses when singing with his oldies band. Jerry’s
VCR has an 1/8-inch mike input, so he begins stringing together cables and
adapters to match up to Tom’s balanced XLR mike. With an XLR to 1/4-inch
cable feeding a 1/4-inch to 1/8-inch adapter, Jerry finally gets sound from
the mike. He also gets loud AC hum from the cable, as well as hiss from
the deck’s maxed-out record levels. Again hoping nobody will notice, Jerry
and Tom begin recording the narration.

Julie’s friend Tina is a radio DJ, and is excited at the prospect of recording
voiceover for a video. She brings her favorite mike with her, which Julie
attaches to her mixer’s XLR input with a balanced 12-foot cable. Bringing
up the mixer’s input trim halfway, Julie gets crisp, clean audio from Tina’s
mike. Stopping only to eliminate the occasional popped "p" sound,
Julie and Tina record the narration in short order. It sounds great.


Jerry begins putting a music bed under his newly recorded narration.
He wants the voiceover to be intelligible but not too loud, so he carefully
sets the level of the music as he records it. Jerry doesn’t realize that
his speakers aren’t very accurate, and tend to accentuate the range of frequencies
that correspond to the human voice. This makes the voiceover sound loud
enough on his speakers, but too quiet on more accurate speakers. When he
discovers the error on someone else’s system, it’s already too late.

Julie owns the same pair of speakers that Jerry does, but is well aware
of their sonic shortcomings. Her mixer has a built-in graphic equalizer
that she can switch between her record output (going to her deck) and her
monitor output (going to her speakers). Julie puts the equalizer in-line
with her speakers, and lowers the middle sliders some to compensate for
the speakers’ strong midrange response. With the speakers sounding more
like they should, Julie can be much more certain her audio will sound the
same on other systems.


Recording one of his last scenes to the VCR, Jerry has to change his
record levels. For the hundredth time that day, he kneels in front of his
VCR and adjusts a small knob behind a flip-down panel. Just when he’s got
the level close to where it needs to be, the scene ends. He rewinds the
scene, plays it again and fine-tunes the record level.

Jerry glances over at his record deck often to check its input level meters.
Moving the deck to eye level helped things a bit, but Jerry’s neck still
gets sore from the constant craning.

Now that Julie has a mixer, she rarely looks at her record deck’s input
meters. She doesn’t need to–the level she sees at her mixer’s output meters
matches that of her record deck. She calibrated her VCR to the mixer by
sending a constant sound through her mixer (she used a flute sound from
her son’s portable keyboard). She adjusted the mixer’s input and output
faders until its meter read 0dB, then set the VCR’s input level controls
to achieve the same 0dB reading. Unless she changes her VCR’s input level
controls, the meters are a perfect match.


Finished tapes in hand, Julie and Jerry scramble to reach the same overnight
delivery drop-box before 7:00 p.m. Jerry is sore, tired and cranky from
making so many compromises in the audio quality of his production. Julie
is relieved to have her video finished, and is marveling at what a difference
her audio mixer made in the whole process.

As they reach for the handle of the drop box in unison, Julie notices the
Videomaker/Panasonic Contest label address on Jerry’s package. "Hey,"
Julie says, "you’re entering the contest too!"


After talking about their videos over coffee, Jerry finally sees the
light. "Julie," he says, "I have got to get an audio
mixer!" "But Jerry," Julie replies, "you’ve got a computer
with a sound card. With the right software you’ve already got an audio mixer."