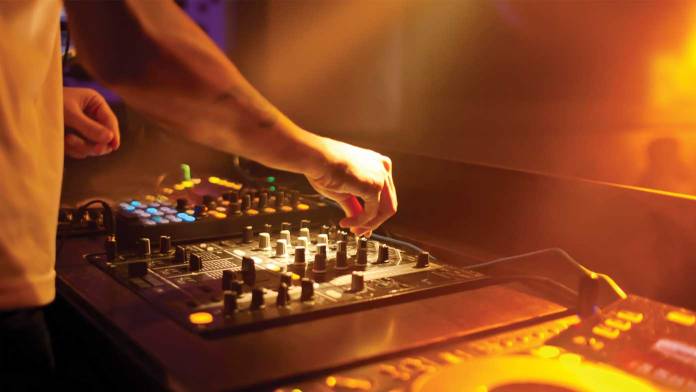 Recording audio in any setting is a task that can be easily overlooked or over-complicated. This article will provide a feasible and sane middle ground by illustrating three common usage cases with their specified resources and approaches explained in the second half of the article.

The first example involves a touring band that is filming a tour video. The video producer is also tasked with capturing the audio at each show.

When possible, try to call or email ahead to find out the specifics of each venue’s sound and stage setups in order to give yourself time to plan your approach and inventory.

The connection types will include a mix of TRS (Tip Ring Sleeve) and/or XLR connections depending on the mixing board’s outputs and the inputs of your recording equipment. Try using the mixing console’s auxiliary or subgroup outputs to record several groups of audio: vocals, guitars and drums. This can be done using three channels (mono) or six channels (stereo). A multi-group recording allows more control at the pre and post-production stages.

Recording audio in any setting is a task that can be easily overlooked or over-complicated. This article will provide a feasible and sane middle ground.

Alternatively you can use a stereo pair of cardioid microphones located near the stage to capture a natural blend of stage and Front of House sound; experiment with their placement until you are satisfied. Be careful to keep the microphones out of the way of the audience and band. This setup can be used in conjunction with a board mix.

The second case involves a set of lectures and presentations that feature multiple speakers. You are tasked with capturing the audio.

The simplest and most practical approach is to record a two-channel feed from the mixing console. The signal can be from the auxiliary or Main LR outputs in this case.

The third case requires roaming interviews with guests at an event. You will be working alongside a camera operator.

The most professional option will be to use a higher-end camera that supports external inputs where you can attach a camera mounted wireless microphone system.

The most professional option will be to use a higher-end camera that supports external inputs where you can attach a camera mounted wireless microphone system. Such systems support both handheld and lavalier microphones.

The camera will be doubling as the audio recorder in this case.

A recorder similar to the Zoom H6 offers a flexible combination of external inputs and interchangeable microphone modules. This offers a solid standalone option in the event that the techniques listed above are not feasible. It can be easily used in handheld, shotgun or stereo microphone configurations.

A camera with a built-in shotgun microphone can be used in certain situations, but will require the camera operator to consciously track the sound source.

As a last resort you can use a console’s Tape Out to send a basic two-channel line mix to a recorder.

These are the most common approaches to recording audio at a live event and are easily scaled to suit the event type. I cannot stress enough the importance of selecting a suitable point of intercepting the audio signal. This selection will determine the degree of control you will have of the mix during recording and post-production.

This is the most practical and straightforward method of recording. Locate the auxiliary outputs that you can use as your mix source. The auxiliaries are commonly located by the console’s output section alongside the main, buss and sub group outputs. Aux groups are great since you can independently dial in levels for each contributing channel and build a flexible mix.

You can also use multiple auxiliary outputs to create a more detailed mix where you assign the channel strips to multiple auxiliaries for more control. For example drums (aux 1-2), guitars (aux 3-4) and vocals (aux 5-6). This can work with any variety of audio sources.

If there are no spare auxiliary outputs you can use subgroup/buss outputs or the Tape Out. These alternative outputs afford less control since their levels are not independent from those of the channel strips.

There is an art to picking a static listening position that provides the best natural blend of stage and front-of-house sound. A basic approach is to use two matched cardioid microphones in a X-Y pattern using a stereo bar. Stereo microphone techniques do require some research and practice.

When working with digital audio for video, always double-check your file format, sample rates and frame rates. Common audio settings for video are WAVE audio, 48KHz 24bit at 29.97d fps. Recording audio on a separate system is referred to as Dual System Audio.

My current choice is the Zoom H6 on account of offering six channels of input and interchangeable microphone modules. These features allow the H6 to functionally compete with some multi-input interface and DAW setups.

While less portable, this method can be scaled to accommodate just about any number of channels and benefits from having a full DAW environment handling the recording. This will enable anything from a simple two-channel to large format multi-track recordings. Digital mixers are common with larger touring acts.

Choosing the right microphone for the job can make a night and day difference. Below is a quick overview of what the common options are.

The important differences to be aware of are that Dynamic microphones do not require Phantom Power and are generally less sensitive and more capable of dealing with higher sound levels. Condenser microphones offer increased sensitivity and require Phantom Power, which is most commonly +48 Volts DC and is available in all consoles and the majority of portable recorders.

These patterns refer to a microphone’s directional sensitivity at different angles relative to the front of the microphone.

These microphones include both standard microphones and their broadcast themed variants. Both types come in wired and wireless configurations. The common polar patterns are Omnidirectional and Cardioid. Handheld microphones are used for both vocal and dialogue applications by singers and journalists alike.

Also referred to as a lapel and clip-on, these microphones usually feature wireless packs and are great discrete options for picking up speech and dialogue during interviews and presentations.

A highly directional microphone that features a narrow polar pattern that picks up sound directly in front. This makes it the preferred choice for on set, voice replacement, and sound effect recordings. The operator must be careful to keep the microphone pointed toward the sound source.

Also referred to as boundary microphones these are commonly used in stage productions and capture reflected sound from nearby sources. They are used for large stage groups in both dedicated and reinforcement roles.

As with any production, the best approach is to familiarize yourself with the relevant event details in advance. Aiming for a quality recording does not have to come at the expense of practicality.

The large variety of connection choices can sometimes be challenging. Fortunately there is a method to the madness that makes a functional inventory and setup easy.

Adapters can add additional points of failure in a system and generally should be avoided when possible. If you absolutely must use them try to keep it simple with XLR to TRS, dual phono to single 1/8”, 1/4” to 1/8” adapters.

All recording and mixing consoles will feature a common set of analogue outputs.

Industry best practices encourage the use of balanced connections since they offer much better insulation against interference, longer cable runs, and matched signal and impedance levels. What is important is that balanced connections carry cleaner and better sounding signal over much greater distances.

Digital Connections are oriented toward large-scale events since they allow for high numbers of channels to be transmitted using very few cables. It is good to be aware of these connection types since you will inevitably encounter them.

Optical connections are immune to electrical interference and ground loops. The most common of these is MADI since it allows for 56 or more channels to be sent large distances via a single cable, usually from an equipment rack somewhere backstage to the Front of House mixing station.