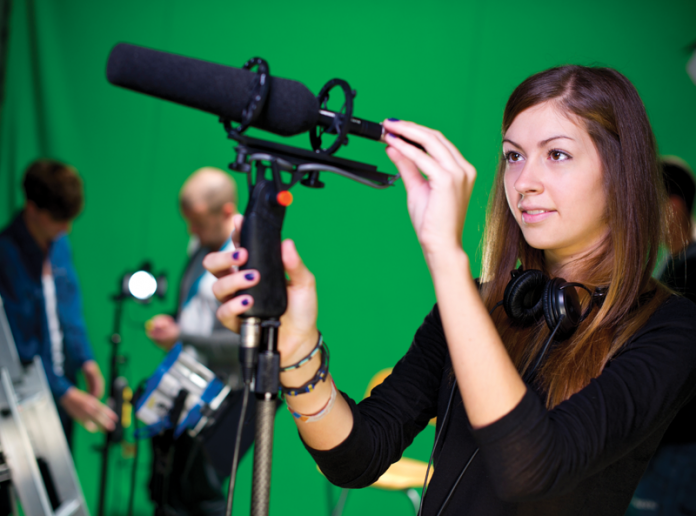 Watch any behind-the-scenes bonus feature or documentary and you will likely see a boom microphone or boom mic. In fact, you’ll see boom mics on the set of any television drama, reality show and even game shows. They’re standard gear in motion pictures, documentaries and virtually any visual production that includes audio. A boom mic is a simple, effective tool that works in just about any situation, and one that you can use too.

What Is A Boom Mic?

Simply put, a boom mic is any microphone mounted on a pole. Of course, that’s a very broad description and there are many configuration options. First, let’s look at the pole. A boom pole is either handheld or mounted on a stand, much like the boom arm of a crane. In fact, the term boom is used in mechanical equipment, air and water craft as well as audio production. Booming a mic is the process of holding or placing a microphone in position, using the boom pole. There are expensive carbon fiber boom poles along with more economical fiberglass and aluminum models.

Some include the microphone cable, others don’t. The microphone is usually attached to the boom pole with a shock mount to minimize any handling noise. Finally, when using a boom mic outdoors, the entire microphone is covered with a large windscreen to eliminate the effects of wind noise.

In the standard configuration, a boom pole is outfitted with a shotgun microphone. This is a powerful combination due to the very directional nature of shotgun mics. However, you can use just about any microphone on a boom pole. In fact, it’s fairly common to see standard cardioid-pattern microphones in controlled situations like sitcom production or when you need to mic several people at one time. In sound effects gathering, a stereo microphone might be used to reach into a difficult area. It’s even possible to attach a small portable audio recorder to a boom pole for the same application. Anytime you need to capture audio at a distance, a boom mic is a good option.

There are several ways to leverage the power of a boom microphone. In a normal film-style production, it’s common to have someone dedicated to the task. This person is called a boom operator. The boom operator has a boom pole and microphone. The microphone cable runs to a small belt pack that supplies a headphone feed for the boom operator. With this, they can hear exactly what the microphone hears and make any adjustments for optimum sound quality.

If that sounds complicated, it is. Most small productions don’t have the budget for multiple operators and equipment. In these situations, the audio from the boom mic is often routed directly to the camera for recording. As a safety measure, the audio may be recorded separately on a portable recorder, laptop or other backup device. The boom operator is in charge of getting the best possible sound quality and sending it to these recorders.

When using any microphone, it’s common to point it directly at the sound source—usually a human—and get as close as possible. Using a boom pole makes this even easier.

Typically, the boom operator brings the microphone in, just overhead and barely out of the frame of the camera. This is something of a dance that must be choreographed with the camera operator. The microphone points down—usually at an angle—toward the mouth of the talent. This provides a clean, natural sound that mimics every movie you’ve ever seen. The boom operator monitors the sound on headphones and makes small adjustments throughout the shoot, tweaking the sound for the best quality. If the scene is shared by multiple characters, the boom operator gently twists and turns the microphone as needed to capture all the dialog. All this while holding a long pole over his or her head. This job is a workout and completely underappreciated.

The boom operator is in charge of getting the best possible sound quality and sending it to the recorder.

There are times when the overhead approach won’t work, either for logistical reasons, ceiling height or even background noise. In these situations, a simple alternative is moving the boom mic to a lower position, pointing up at the talent. This produces a slightly different sound quality, but, given the situation, it may be the best solution. Headphone monitoring is crucial in any setup and will help determine the best approach.

In a perfect world, we could all mount our boom mics to a stand, position them perfectly and be done with it. This is great for sit-down interviews, but one of the best features of a boom mic is its portability. Your boom mic can go almost anywhere without extra stands, sandbags or any of the additional hardware used in a studio setting. This makes it a very flexible and powerful tool for audio recording. Of course, the downside is that someone has to hold it.

When holding a boom pole, it’s very important to work quietly, and not just because you’re close to the talent. Any twisting or movement on the boom pole will transmit directly into the microphone. That means a few best practices are in order. First, the boom operator should remove all jewelry that might come in contact with the boom pole. Second, if possible, outfit the boom pole with cushioned grips to minimize handling noise. A pair of neoprene work gloves is a great investment too. Next, make sure all cabling is taped or strapped securely to the pole. Any extra cabling should be coiled neatly and loosely and secured somewhere, possibly to the operator’s belt. And finally, always use a shock mount for the microphone. This item is easy to miss, especially if the microphone comes with a mounting clip. A shock mount provides a lot of mechanical isolation from the boom pole and offers a better recording.

Now that you know what a boom mic is and how to use it, it’s time to stop reading and just do it. Any new technique requires some practice and booming is no exception. Test your setup under normal shoot conditions to shake out all the bugs and find the best options. A boom mic isn’t perfect for every situation, but it works well under a wide variety of circumstances and is a great fallback position when things don’t work out as you planned. Add this one to your bag of tricks. You won’t be sorry.

A quick pass through Google Shopping shows that you can easily spend as much on a full boom microphone rig as you can on a camera. If that seems a bit steep, here’s how to build your own setup for under $150. First, buy a generic shotgun microphone on ebay. It won’t sound amazing, but it’s much better than nothing and, if you shop carefully, it should come with a long cable and foam windscreen. Second, visit your local big box hardware store and purchase these items: an aluminum painter’s pole and a 1½” to ½” PVC Tee connector. You’ll also need a few inches of ½” PVC pipe. Finally, grab at least four thick elastic hair ties from your local superstore. So far, you’ve spent about $40. The last item is a portable audio recorder like the Zoom H1 ($100). Assemble your shock mount using our instructions here.  Using a hair dryer or heat gun, soften one end of the short PVC pipe and force it over the end of the painter’s pole. Allow it to cool and harden in place. Finish with gaffer’s tape for added security. Thread the shotgun mic through the shock mount, attach the mount to the pole, plug in your audio connections and hit the record button. You’ve just built your own boom mic system, and it’s easy to upgrade individual components as you build your audio skills.