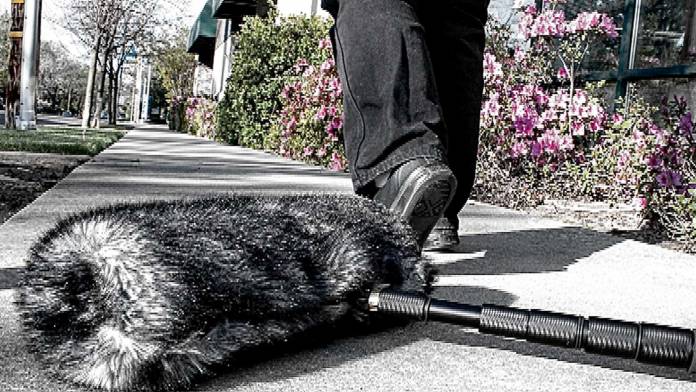 The shotgun microphone is the workhorse of film, television and documentary work. With a boom operator or just mounted on a microphone stand, shotgun microphones do a great job of capturing sound in just about any circumstance. A quick look at the polar pattern of a shotgun mic tells the whole story. Lots of pickup sensitivity from the front with virtually none on the sides and very little in the back. This creates an ideal way to isolate voices and other sounds from their surroundings.

As amazing as the shotgun microphone is, there are times when it’s not the right choice.

As amazing as the shotgun microphone is, there are times when it’s not the right choice. And what if you simply don’t have one available? There are plenty of options out there. It just takes some thought, a little planning and some creativity.

Finding the right microphone for your shoot may only require some simple assessment. The first thing to consider is what microphones you actually have available. This could quickly narrow the field and force some creative thinking on your part. Another consideration is budget. If using a shotgun microphone requires rental and/or an additional crew member, that could easily eliminate it from the process. Finally, the content or audience for the video can dictate what microphones are acceptable.

As amazing as the shotgun mic is, there are times when it’s not the right choice.

For instance, let’s say that your video is a series of quick street interviews of people who have tried a new product. In this situation, a handheld microphone is a perfectly acceptable alternative. It requires no operator since the talent points the mic in the right direction automatically. This technique also lends a sort of newsy immediacy to the video which only enhances the look and feel.

Or maybe you’re shooting a scene for your latest independent film. The scene is a news conference for a disgraced politician/athlete. News conferences always have a dozen or so microphones on the podium. Of course, for your film, they’re all props. But what if one of them is a real, live microphone attached to your audio recorder or camera? Now, your practical prop is a very helpful tool.

Talk shows, news programs and most interviews include a lapel or lavaliere microphone. The producers make no effort to disguise it. They’re even used as backup microphones on shows like American Idol. You can do the same thing with a simple lapel microphone. It doesn’t even have to be wireless, saving you time, money and a couple of sets of batteries.

Audio in a Pinch

If you’ve read Videomaker much, you know we rarely advocate using the built-in microphone on your camera. The reason is simple: it sounds terrible. The camera is rarely close enough to pick up the direct sound of your subject. So you get a mix of their voice and everything else, including echo if you’re inside a large room. In addition, built-in microphones and their related circuitry don’t get much love from the manufacturers. But let’s be honest, there are times when you don’t have any other option. Either your external microphone batteries are dead, you’ve got a bad cable or something just isn’t working and you have to grab the shot now. In fact, if you watch much reality TV, you’ll hear the results of the in-camera mic from time to time. If that happens, there are some things you can do to improve the sound quality.

First, do everything possible to minimize external and background noise. This will mask any dialog you might record. Second, get closer. This is harder than it sounds. Moving the camera closer to the subject means you have to sacrifice the look of the shot to some degree. It also means you lose some of the depth-of-field from your lens. But if this is the only way to get the audio, it’s worth the sacrifice. Third, check in the menu system of your camera. There could be a “zoom microphone” feature. This option uses audio trickery to increase the directionality of the mic as you zoom further in. While the feature is more a gimmick than anything, it could work in certain situations.

It’s very common to hide a lavaliere mic on your subject. Using gaffer tape, medical tape, magnets or other means, the microphone is placed discreetly under a shirt, jacket lapel or collar. The cable then winds somewhere away from the view of the camera – preferably behind the subject. This keeps the tiny mic close to the talent’s mouth but out of sight. This tried-and-true technique is used every day on movie sets, television shows and video of all kinds. It works for them and it will work for you.

It’s also possible to hide microphones on a set. Lavaliere mics are popular for this due to their small size. Anything that visually masks the microphone is fair game. This can be a potted plant, a coffee cup or any other object close to the sound you want to record. We’ve even seen one embedded in a walking stick!

Regardless of the microphone and technique you use, please monitor the results with headphones. Since you’re using alternate methods of audio pickup, it pays to ensure that they actually work for your application. Closed-ear headphones are best for this since they muffle most of the outside sound. Interestingly, some earbuds work well for this too. Not the $1 type, but any earbuds that use a silicone sleeve to seal out external noises. Few earbuds are truly high fidelity, so use with caution.

Who Needs a Shotgun?

It pays to try some of these alternative microphone techniques before using them on an actual shoot. While your main mic may still be a shotgun, you’ll have a better idea of how to improvise when the situation calls for it. And it never hurts to have multiple microphone options.

Smartphones and tablets have become common tech devices for almost everyone. With an audio recording app and possibly some hardware, they can be your go-to audio solution too. Several manufacturers make add-on microphones for the iPhone line. With the addition of a recording app, many of these rival dedicated recorders. Plus, you always have it with you. Or how about using the inline microphone in a pair of earbuds as a makeshift lavaliere mic? For a stealthier approach, fire up a recording app and place the smartphone or tablet on the desk in front of your subject. Even if it ends up in the frame, no one will think twice about one of these devices within reach of the subject.