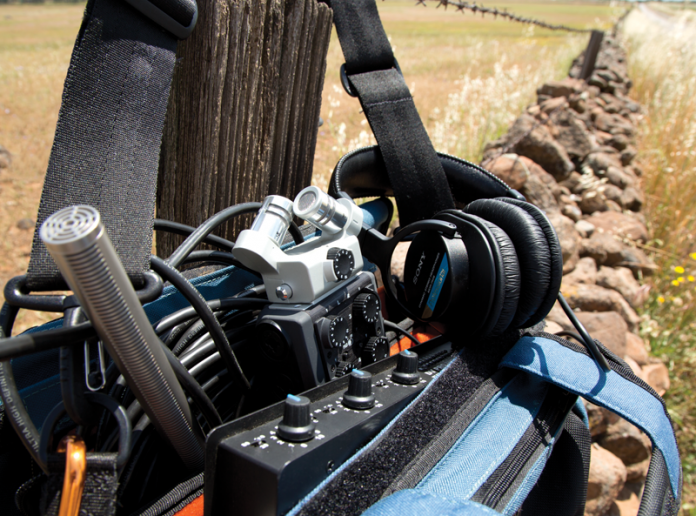 How much did you spend on your perfect audio kit? What audio kit, you ask? For some reason, many video creators treat the audio portion of their productions like a distant cousin. Talk on blogs and forums is all about pixels, sensor size, codecs and bitrates. There is little, if any discussion of audio. Improving your audio kit is much like remodeling your kitchen: it gives the most bang for the buck. When your audience hears a professional recording done with care and attention, they’re much more forgiving of the visual portion of the content. How many times have you read that in Videomaker? Dozens? Well, there’s a reason. Below, you’ll find 10 essential items to build the perfect audio kit.

No audio kit is complete without a shotgun microphone. They’re the workhorse of the film and TV production world, and for good reason. With a shotgun mic, you free the talent to move and act, not worry about microphones under their clothes or body packs clipped to their pants. Shotgun mics have a highly directional pickup pattern, minimizing noises other than those you want to record. They’re also very flexible in placement. You can point them up or down at the talent. You can suspend them from stage rigging. Attached to a boom pole, a shotgun mic can reach inside a car or hover above a waterfall. In addition to dialog recording, you can use them for sound effects recording or a quick voice over. The choice is always yours when you have a shotgun mic.

The next natural addition to your perfect audio kit is a lavalier mic; also known as a lav or lapel mic. This tiny option easily clips to clothing or hides underneath them. With a lavalier microphone, the talent’s mouth is always a few inches away from the mic. With little regard of how much they move, you’ll get a clean recording. With a lav mic on your subject, you can also position their body to block background sounds at a noisy location.

Many video creators treat the audio portion of their productions like a distant cousin.

Reality TV uses lavalier mics extensively, placing one on practically everyone who will be on screen, but they’re also popular on newscasts and sit-down interviews. It’s common practice to use a lav mic in tandem with a shotgun microphone, recording each on a separate audio track. This gives you the ultimate flexibility in post.

Rounding out the microphone section is the handheld mic. These guys don’t get much love in the video production world, but they’re a valuable tool in the perfect audio kit. A handheld mic can be used as-is, held by the talent and on camera, much like a news reporter. It can also be held just out of frame for a quick interview or anytime you are pressed to shoot fast with minimal setup. A handheld microphone will double for a shotgun mic in a pinch and it’s great for recording effects, voice overs and just about any additional content your production requires. Most don’t need batteries and are very tolerant of extremes in temperature and humidity. Perhaps not the prettiest part of your audio kit, but fast and flexible for many situations.

A good selection of quality microphones is important, but there are several essential accessories that help them perform their best. For shotgun microphones, a shock mount and furry windscreen are the most important. If your shotgun mic didn’t come with either, it’s time to add them to the audio kit. A shock mount will minimize handling noise. The furry windscreen is essential when shooting outdoors. A bare microphone will “hear” every tiny puff of wind on your location, distorting the recording and ruining the audio. Adding the windscreen eliminates this problem in all but the windiest of situations.

A microphone stand is a great addition if you record voice overs. It’s also handy for recording musicians and, if you get a model with a boom attachment, it can be used in interview situations too. Don’t forget a roll of gaffer’s tape for hiding lav mics and general fixes on your set.

We’ve spent a fair amount of space on microphones, but they’re not much good without something to plug them into. While most cameras have some sort of audio connector, the best way to attach microphones to a camera is with an audio mixer. These come in many forms, and popular models are often small boxes that sit easily on a desk. Having an audio mixer with four or more inputs allows you to blend several microphones for a large cast, roundtable or panel discussion.

Most mixers include controls for level matching, simple tone adjustments and outputs to feed both your camera and another source or two. If you shoot without access to outlets on a regular basis, consider an audio mixer that runs on batteries. There are fewer out there, but this option opens up many possibilities.

You need a good pair of headphones to monitor audio in the field, during recording sessions and throughout the post process. We’re not talking about the earbuds that came with your phone — although they might work in an emergency. When we say headphones, we mean over-the-ear, seal-out-the-world headphones. They should sound clear and natural on any source, not boomy or thin. Also, make sure the audio connector mates with your most common audio devices and has an adapter for the others.

If you do much studio-style recording of music or voice, you need a dedicated audio recording interface. While you can record to the soundcard in your computer, the audio quality will suffer. Adding an audio recording interface gives you a clean signal path to your software. In addition, you gain professional audio connectors, phantom power for condenser mics and headphone monitoring. Starting around $100, this is a great way to clean up your audio path and gain some convenience in the process.

We’ve mentioned portable audio recorders several times in the past. In a very short time, they have become the go-to device for audio recording in the field. With the addition of some batteries and a media card, you have a mobile recording studio starting around $100. Some of the newer models double as audio interfaces and mixers too, recording as many as six independent channels of audio. Depending on your production style, it’s possible to use this type of device for three tasks instead of one. In the studio or on location, a portable audio recorder is an important part of the perfect audio kit.

While there are many free and bundled audio software packages floating around, there is no substitute for full, branded, manufacturer-supported audio editing software. It’s not a huge category, but there are many solid packages to choose from. Brand-name software offers stability, a focus on the user interface and broad plug-in file format support. Editing is easier with a package you’re committed to and the odds are greater that you can share projects with collaborators.

Even the perfect audio kit will have issues from time to time. Regardless of how carefully you handle your gear, something will eventually go bad. This always happens on a shoot. The final item in your audio kit is spares for everything you can carry. Spare microphone cables are essential as are spare batteries, adapters and memory cards. Consider carrying multiple microphones whether you need them or not. One of them could get you out of a bind. Regardless, keep spares available for those items that can make or break your production, the items you can’t do without.

There are hundreds of items that could be included in the perfect audio kit. We’ve boiled the list down to these 10 to simplify your selection and focus on the essentials. With these items available for audio production, you’ll have everything you need for nearly any shooting situation.

Contributing Editor Hal Robertson has been building his perfect audio kit since 1979. It’s a work in progress.

Microphone with mixer and headphones image from Shutterstock.