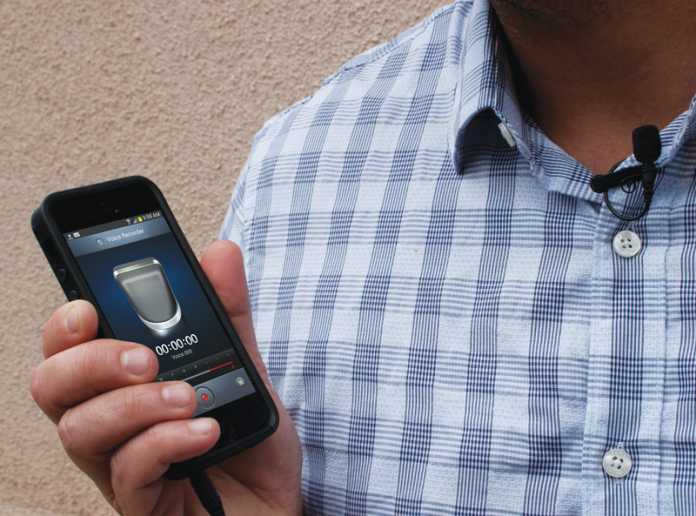 Smartphones and tablets didn’t matter to the masses until just a few years ago, and now they’re everywhere. Mobile devices have become our go-to choice for obvious reasons. A small, portable, connected gadget is pretty handy for a media producer on the move. And now – with some adapters and an audio recorder app – they can serve as your audio field recorder too. While you probably didn’t plan to do audio recording on your mobile device, it’s an option that’s worth considering.

Our smartphones and tablets are pretty amazing when you think about it. We typically have a phone, GPS, still camera, video camera, audio recording and a host of other goodies with us at all times. And we use them too. Whether it’s a fun picture for Facebook or completing a work project and emailing documents, mobile devices are a part of our daily lives and there’s no turning back. When you dive into the mobile world, you quickly discover there are thousands of apps that run on your device, extending its capabilities. From games to spreadsheets and everything in between, it’s clear these are more computer than phone. And you know what you can do on a computer? Audio recording, monitoring and editing.

We’ve sung the praises of the portable audio recording device before, and for good reason. They’re small, portable, dedicated boxes that allow you to quickly and easily perform audio recording, monitoring and delivery of world-class audio for your video projects. But it’s possible to outfit your mobile device with those same features and more, turning them into audio recording devices. Your mobile device is already small, portable and battery powered, so that’s covered. It contains a small computer, a display and audio jacks and, with the addition of a few extras, will do the job of its purpose-designed cousins.
Advertisement

Audio recording apps are all over the place, for iPhone, iPad and Android and you’ll have no trouble experimenting with several variations. Obviously, some are better than others. In fact, the really tricky part is getting the audio off of your smartphone. That means an audio interface or adapter cable(s). That’s where things get sticky.

Apple has it nailed. They design and manufacture their iPhone and iPad among other devices. They also developed the operating system and control all the apps available to you in the iTunes store. This translates to a generally seamless integration of hardware, software and  peripherals, with the possible exception of the new Thunderbolt connector. Some iPods, iPhones and iPads have the same connector, which made it possible for third parties to develop add-ons that enhance capabilities and extend their function. And many audio manufacturers did just that. Some are basic docks or audio interfaces that provide additional inputs and outputs while others are full-blown mixing consoles that operate in software. All of them turn your iPhone or iPad into an audio recorder.

If you prefer a simpler approach, consider a splitter cable for the audio jack. If you’ve ever examined the earbud plug for your mobile device, you may have noticed four connections rather than the three connections common with stereo headphones. The multi conductor connector allows for the left and right channel earbuds along with a mono microphone connection. This is called a TRRS connector for Tip, Ring, Ring, Sleeve. StarTech.com, and others, make adapters specifically for the purpose of piping audio into your mobile device. To use the splitter,  plug it into the audio jack of your mobile device, plug headphones into the headphone jack and a microphone into the mic jack. Remember that this is a mic input and requires mic level audio signals if you’re feeding it with an outboard mixer or other audio devices. Adjust your output levels accordingly. Finally, launch your audio recording app and do a quick audio level test.

DonÃÂt rely on the built-in microphone or even the included microphone preamp in your mobile device.

The Android operating system has grown exponentially since its release just a few years ago. Since then, more than 900 million devices have been activated, meaning you almost certainly know someone who owns one of these mobile devices. But, unlike Apple’s iron-fisted ecosystem, Android is more like the Wild West. With 15 major manufacturers and no less than nine versions of the operating system in circulation, it’s fair to assume there is far less compatibility than with Apple’s platform.

First, there is no standard dock or I/O connector on Android devices, so you’re limited to the audio jack for input and monitoring. Fortunately, the splitter cable we mentioned earlier works equally well on iOS and Android. Second, not every Android device has a TRRS connector to turn it into an audio recorder. In fact, several tablets – including Google’s Nexus 7, contain only a standard headphone jack. Android phones are usually a safe bet, but check the specifications for your particular make and model to be sure. Third, due to multiple operating system versions and hardware platforms, not every audio app will work on every device. The Google Play Store simplifies this with a notification of compatibility for your specific device(s) prior to installation.

Regardless of the hardware or software you choose, there are several things that will help you capture and deliver the best possible recordings from your audio recording devices. Don’t rely on the built-in microphone or even the included microphone preamp in your mobile device. While some are pretty good, an external preamp will be much better if you can use one.

Make sure your audio recorder app allows live monitoring of the audio signal, with headphones and meters if possible. Audio is audio regardless of your recording path and good monitoring is essential for good recordings.

Look for an audio recorder app that provides an audio sensitivity adjustment to help match your audio signal to the device. Alternatively, use an external preamp or mixer to do the matching. As a last resort, consider using microphone placement to compensate for audio levels. Many mobile devices have hardwired Automatic Gain Control or AGC circuits. There may be no getting around it, so do a couple of test recordings and make adjustments for the best compromised settings.

Record in the highest possible quality. Many recording apps store their files in MP3 or .3ga format. These are lossy, compressed formats. While they will work in a pinch, you’ll lose quite a bit of quality. Whenever possible, record to WAV or AIFF files. They’ll take up more space, but the audio quality won’t suffer.

Be aware of the available capacity of your memory card. It’s easy to fill mobile devices with hundreds of Instagram pictures, multiple copies of Angry Birds and Candy Crush, so make sure there’s enough room for your recordings. If possible, insert a large microSD card and instruct your recording app to place its files there.

Many audio recording apps contain editing and signal processing options. Usually, you want to do as much of this as possible in post-production. However, there may be times when a quick in-app edit is just the thing. Simple editing trim points are common in many apps and the next steps are normalize functions, along with basic fade-in and fade-out.

When it’s time to move your audio recordings to the video edit suite, there are multiple options. You can always plug in a USB cable to transfer recordings, and iPhone users should be familiar with moving files via iTunes. If you’re recording to a separate memory card, you can pop it out and slide it into a card reader for transfer. These are the standard methods, but don’t forget — you’re using a connected device. You can add files to your Google Drive account, Dropbox, Evernote and even email. It’s usually just a couple of taps away and much easier than pulling the back off your phone to access the memory card.

Recording, monitoring and editing audio on a mobile device may or may not be the ultimate fix for you. But it is an option and one that you carry with you all day, every day. It’s easy and inexpensive to try and could save you the purchase price of a portable recorder in the future. We’ll call it a highly recommended option.

No input? No Problem

So you’ve got a nifty new Android tablet, but it has no audio input. Don’t panic, there may be a solution. A Bluetooth represents a microphone, so when you’ve got one connected, find an app like Easy Voice Recorder that can record with Bluetooth. For those sporting an iPad, you may try Recorder Plus HD to record via Bluetooth. From another perspective this might look like a lav mic that glows blue. This solution isn’t for everyone, but it may be the quickest and only option available. Bluetooth can be a little flaky sometimes, but if your phone and headset are all you have, it’s worth investigating.