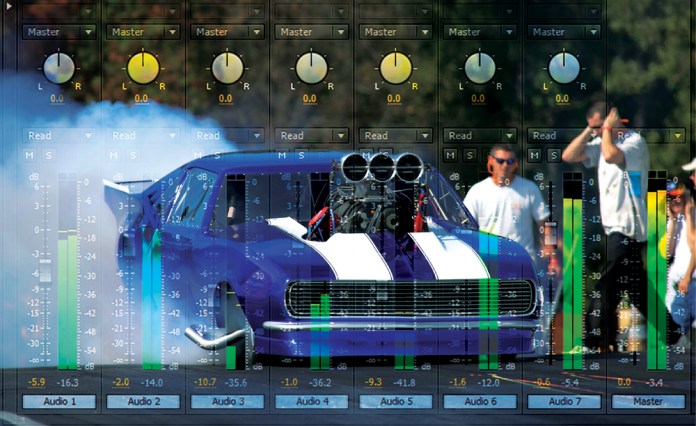 How do they capture crystal clear dialog in that noisy club environment? How is it possible to hear the snap of a twig so clearly? Simple. It’s an illusion. Not a Las Vegas magician’s illusion, but an illusion nonetheless. Adding a few simple tricks and gimmicks to your audio skill set will have you producing your own illusions in no time.

If you’ve ever watched a NASCAR race on TV, you’ve got to feel for the poor audio mixer in the control booth. One minute, there’s a field reporter in the pits describing something that happened. A few seconds later, 43 cars blast by at nearly 200mph. Even screaming at the top of their lungs, we can barely make out what the reporter is saying. Contrast that to a racing movie like Days of Thunder or Talledega Nights: The Ballad of Ricky Bobby. We see and hear the same things going on, but magically, we hear everything perfectly. We call this the Illusion of Loud. As movie viewers, we know that races are loud. As content creators, we also know that this was a movie set and there was probably no natural sound of a race at all. The director simply had the actor yell into the microphone and they added the car sounds later during sound editing. The same technique goes for most any type of sports film: hockey, football, basketball, boxing, take your pick.

Staying with the sports theme for a moment, what about golf? Golf announcers speak in hushed whispers because, as we all know, you’re supposed to be quiet while golfers take their swing. But where are the announcers? Are they right there at the 14th hole? Not likely. In reality, they’re probably in a production trailer or on a set far away from the action. This is the Illusion of Quiet. The announcers deliberately enhance the intensity of the moment by whispering, whether it’s required or not.

But how loud is too loud? While recording digital audio, there is a hard ceiling of 0dBfs. That means all your sound sources, mixed together, cannot exceed that limit. Of course, there’s a balance in there too. You want your sources to blend well and sound natural in the context of what’s on the screen. And, if you’re mixing in 5.1 surround sound, the sum of all six channels can’t exceed the ceiling. This ensures compatibility with all playback systems and requires a more elaborate balancing act.

Conversely, how soft is too soft? If you’ve recorded much audio before, you know there is always some source of background noise, either at the location or generated by your recording devices. Good recording technique dictates that we capture audio with as much dynamic range as possible, but that’s difficult if you’re going for “soft.” That’s why in movies and television, when people whisper, they whisper much louder than they would in real life. Alternatively, the whisper was recorded in the perfect world of a recording studio where background noise and equipment limitations are virtually nonexistent.

Today, we deliver visual media to a wide variety of devices. The largest system is the movie theater and we know it sounds great there. But months later, that same movie might be seen on everything from a home theater to a smartphone, and it has to sound good regardless of the device.

As a media creator, it’s wise to consider all the possible delivery methods and mix your audio accordingly. By leveraging the illusion of loud and quiet, your audio will cut through however it’s played. For instance, let’s create a fictitious commercial for a new cereal called “Spy Flakes.” Through some combination of vitamins and minerals, Spy Flakes make kids extra sneaky and smart. The commercial features kids hiding, whispering and generally spying on their parents. As the commercial’s producer, your job is to capture the kids whispering, and clearly, so it can be heard on television. In addition, there will be theme music and an announcer’s voice that can’t overpower the kids. As a part of the promotion, the cereal box will feature a QR code so moms can scan and watch the commercial while standing in the aisle at the supermarket. The smart producer will leverage every tool available (including checking the final mix on their phone) to ensure the commercial plays well on television and at the grocery store.

While dialog capture is key, sound effects will also help sell the illusion of quiet. Shoes squishing in carpet, creaky doors and clothes rustling, all indicate quiet sounds. Whether you record them yourself or use free sound effects, if you push them louder in the mix, they become larger than life, heightening the sense of quietness.

Surprisingly, one of the best ways to provide the illusion of a loud or quiet environment is with visuals. Consider a club scene like the one in The Social Network. With only some flashing lights and a small mob of people, the viewer naturally assumes this is a loud club. In reality, it could have been shot in any large room. Add some club lights, some haze and a crowd and there you go.

In the same way, a library is assumed to be a quiet place. 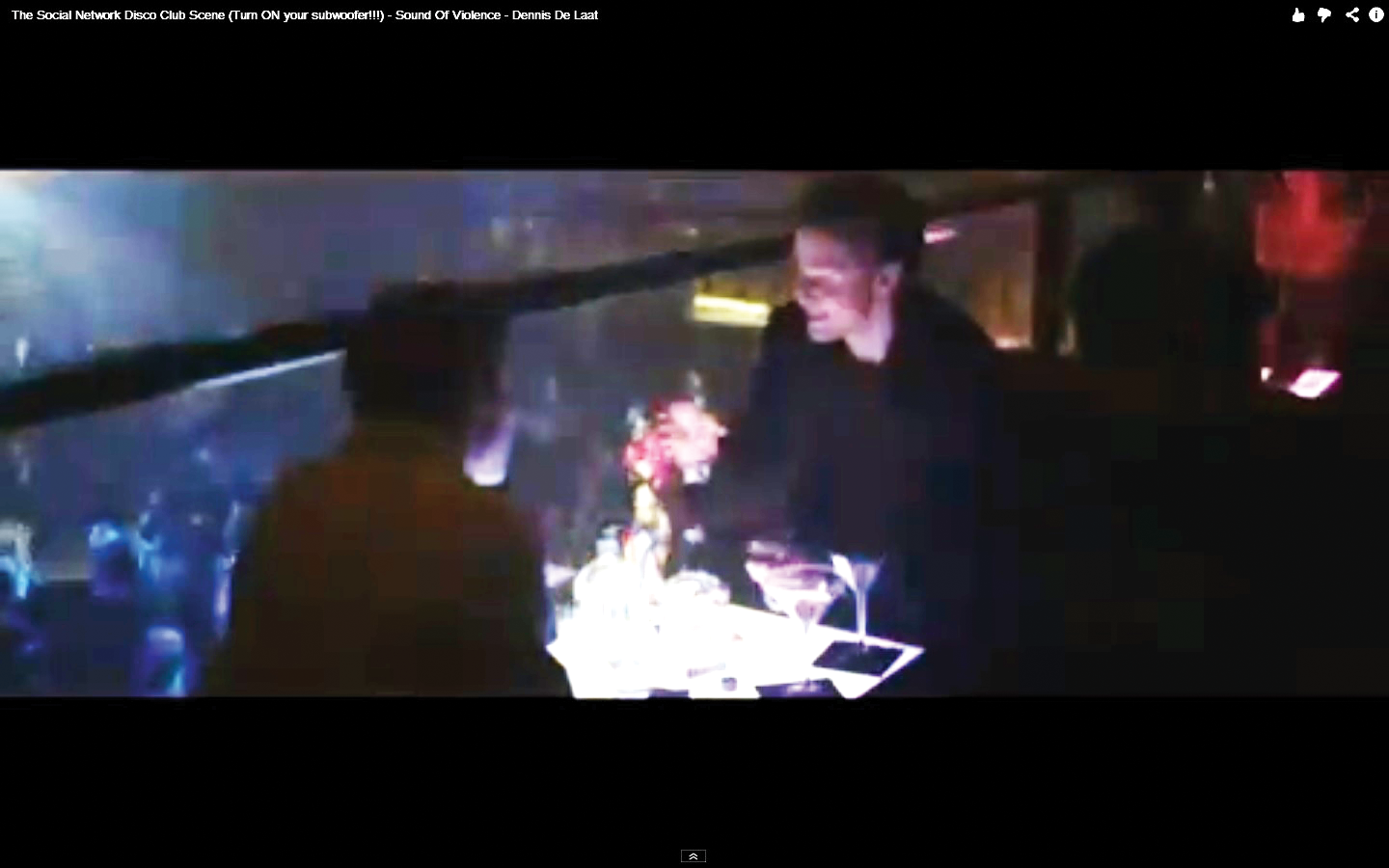 The library scene in Ghostbusters is a classic example. Downstairs in the library, the librarian operates quietly, despite the floating books, until she senses the card catalog flying all over and she runs away screaming. The naturally quiet environment makes the loud sounds seem even louder.

Another simple visual cue to either loud or soft is the use of reaction shots. If someone sticks their fingers in their ears, we assume it’s very loud where they are. The same thing applies to the appearance of hearing protection. By contrast, if an actor strains to hear what someone is saying or cups their ear to hear better, the viewer instinctively knows that this was a quiet sound – whether it really was or not.

Finally, don’t forget about processing the audio in your audio editing software. Here, the audio compressor is your best friend. With the right adjustments, a compressor makes loud sounds a little softer and soft sounds a little louder. Use with caution though, it’s easy to apply too much processing making your loud sounds lifeless and your soft sounds noisy and inconsistent. For high impact sounds like gunshots and explosions, consider using a limiter instead. By lowering the audio ceiling with 6dB of limiting, you provide the illusion of something twice as loud without going into distortion or overload.

This is a fairly subjective topic and one that may be hard to grasp. So the next time you sit down to watch a movie or TV show, consider how the creators may have used the illusion of loud or quiet to accomplish various scenes. Use what you know about production and post-production to break down the soundtrack and guess how each bit was done. If possible, watch bonus features and listen to director’s commentary to mine tidbits on production. Then, find a way to apply them in your next project.

A friend recently recounted her experience creating a short film for a 48-hour film contest. The pace was hectic, but her team managed to write, cast, shoot, edit and deliver their project in the allotted time. As the movie was playing in the contest theater, she and her co-creators were shocked to discover they could barely hear the dialog over the music and sound effects. Their mistake was twofold: First, the project was edited entirely on a laptop and they trusted their audio mix to a pair of dime-sized speakers. Second, in the rush to meet a deadline, they failed to use the audio metering tools built into their software. A quick check of one of the louder scenes would have shown the mismatch between voice and music. She says she’s learned her lesson and swears this won’t happen again.