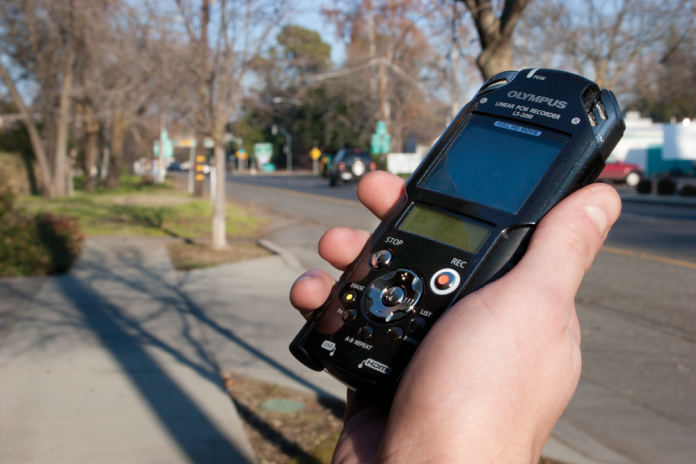 Here’s the scenario: You recently replied to an audio gig posted on craigslist. It’s set to shoot next Tuesday and the producers just hired you. In your email information packet, they list three locations and the addresses. One is indoors, one is an urban downtown setting and the last is on a wooded walking trail just outside of town. A quick look at Google Maps verifies the locations and now you’re wondering what challenges each will bring, and how to deliver the very best quality audio. You need to do a location scout, only this time it’s for audio.

Now we've talked about location scouting before, and when you're thinking video, you need to know what to expect. If a subject is going to be on-camera and you have a bad background, you have choices on how to fix it. But if you're gathering audio and the location is riddled with unwanted sound, you're rather stuck, so let's look at what to keep an eye (or rather, ear) out for.

The scheduled indoor location is the conference room of a local law firm. The first step is to call the law office, tell them who you are and ask very nicely if you can come by to check out the room ahead of the shoot. Be flexible with your schedule as law offices can be busy places. With your visit scheduled, you find some professional-looking clothes and get ready to head out the door. As you get in the car, you’re wondering if you should bring anything other than your eyes and ears.
To be honest, your original equipment may be enough. A small pocket recorder and a pair of headphones is even better. And, while it would be nice to take your whole recording rig, it’s probably overkill for scouting locations. Once you’re in the room, what do you look and listen for? First, make note of the air conditioning system. It may be possible to shut it off if no one is working on the day of the shoot. Otherwise, assume it’s always on and listen for any loud noises, rattles and air whistling through vents. You might find a small refrigerator in the room. These little guys seem to kick on at the most inappropriate times. See if you can unplug it. Listen for background music systems and phones that ring in the room. Often, a background music system includes a volume control on a wall somewhere. Find it and make sure it works. As for phones, the simple solution is unplugging, but that might not sit well with the office manager. Ask the receptionist if the phone ever rings in the conference room and, if so, see if they can minimize that during the shoot.
Finally, observe the workplace. If the shoot occurs during business hours, make note of movements and conversations. Locate the break room and listen for how sound carries throughout the office complex. You can always ask people to keep it down, but they tend to forget. Also, visit the bathroom and run some water and flush the toilet. It’s not unusual for pipes to rattle or moan inside the walls and above the ceiling. Whether you find no problems or several, at least you won’t be surprised when you start recording audio, it's all about planning in advance.

The next stop is a small park in the middle of a busy downtown area. This time, bring your audio recording rig – including the microphones you plan to use on the shoot. In this type of environment, most of the audio irritations are beyond your control, so it’s a good idea to know the enemy beforehand. Since you know the time of the actual shoot, plan your location scout around that time to gauge normal traffic and other sounds.
While you may not know the exact park bench or area the director plans to shoot, you can get a feel of the location and everything that happens around it. Look for all kinds of traffic: automotive, wheeled and pedestrian. Check for alleys where big trucks could make deliveries or pick up garbage. Is there a fountain in the park? This can be a blessing or a curse. On the positive side, the fountain splash will be constant and always in the recording, masking some of the other noise and making editing easier later. On the other hand, you’ll have noisy audio no matter what you do. The only option is to minimize it as much as possible with creative microphone positions.
Looking a little further out, are you near any emergency services or a hospital? If so, occasional sirens may be an issue as well as medical helicopters overhead. Speaking of overhead, is your location in the flight path of a nearby airport? The whine of jet engines is almost impossible to eliminate and, if it’s a busy airport, you can expect them all day.
Once you’ve done a visual inspection, it’s time for a microphone test. Get your gear out, put on the headphones and hit the record button. As you listen, test microphone positions and locations to find the magic combination that provides the best audio. It’s helpful to have an assistant here. They can stand in for the talent and give you a real feel for the shoot sound. Save the recordings for later review. Now that you’re familiar with the downtown location, it’s time to head out to the walking trail.

Audio in the Wild

Away from the noise of the city, it’s fair to assume the walking trail will be easy to record, but will it? As you walk down the trail, the first thing you hear is the wildlife. All manner of bugs, birds and other critters calling to each other and rustling through the woods. Normally, this isn’t a big deal and actually lends to the authenticity of the setting. Of course, some areas are plagued by cicadas. When they’re in season – usually the warmer days of summer – the sound can be deafening. It will be extremely difficult, if not impossible, to remove a cicada song from your recordings, so beware.
Apart from nature sounds, you may hear other potential noises too. There may be farmland near your location which could introduce anything from cattle calls to machinery. Maybe there’s an outlying manufacturing facility in the distance. While some are virtually silent, others provide quite a racket – and at varying times of the day.
Finally, you can hear the same ground and air traffic noises that you’ll find in town. You might even hear a train or two. In the seclusion of the outdoor setting, these can seem especially loud and could pause your production several times during the shoot. As you’re recording audio, just be aware of them and make mental notes for later.

Location scouting is an important part of any production. Like many phases of video production, audio is often a last-minute consideration. As the audio recorder, be proactive and scout all the locations ahead of time. If the video crew is from out of town, you’ll be the on-set expert at each location and might provide some valuable insight. Regardless, you’ll definitely be better prepared to capture the best audio possible in each circumstance.

We briefly mentioned Google Maps as a scouting tool, and we highly recommend that you spend some time with this idea. Whether you’re recording audio, video or both, online mapping tools are a great time saver. Google and Bing are the two biggest providers and both have their perks. With a standard map overhead view – called satellite view or bird's eye – you can see streets, businesses and wooded areas. It helps establish potential locations and easily points out possible hurdles like manufacturing facilities, trucking companies, hospitals  and airports. For a more detailed look, try Google Street View. With this feature, you’re driving a virtual car down the streets of the city. If your area is supported, you’ll get a much better feel for the surroundings of possible locations – all from the comfort of home.

Feature filmmakers often do location scouts with a DSLR. Rather than bring the whole crew and a truckload of gear, with one simple tool, they can grab stills of a location from pretty much everywhere. In addition, it’s easy to shoot some basic footage from potential camera angles, giving the team a much better idea of what a location holds. You can approach audio location scouting the same way. Many times, rather than bringing your whole rig, a simple pocket recorder will do the trick. Recording samples around the scheduled shoot time gives you an honest assessment of the location and its audio challenges. In addition, your sample recordings could be used later in post-production to fill in some natural sound.
Contributing Editor Hal Robertson is a digital media producer and technology consultant.
For comments, email: editor@videomaker.com, use article #15796 in the subject line. You can comment and rate this article by going online: www.videomaker.com/article/15796