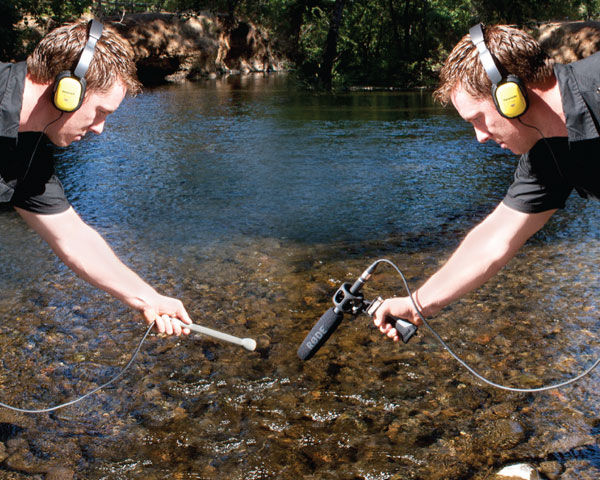 Microphones are an interesting category of video tools, in a geeky sort of way. The primary goal of any mic for video production is the same: convert acoustic energy into an electrical signal for use in recording. But that’s where the similarities end. From that point on, the variations seem endless. At the high-end, there are large diaphragm studio condenser mics that excel at capturing voice and music. At the low-end are the mics in our cell phones, which work well for communication, but not much else. At every point in between, there are specialty microphones for practically any situation when recording audio for video.

Whether you’re working in an audio production studio or shooting in the field, there’s a mic type for you in your sound studio equipment.

Unless you’re shooting with some high-end cinematography camera, odds are that the camera you use has one or more mics built in. It’s also likely that you’re not too impressed with the quality. That’s OK, you’re not alone. There’s a perfectly reasonable explanation for this. Because the mic is attached to the camera, it will naturally be some distance from your subject. When the mic is far away from the source, it picks up everything between the two. So instead of clean, clear voices, you may hear the voices buried in ambient noises or echoes from the room when you’re recording.

This problem has created a completely new category of audio product: the portable audio recorder. When used with external mics or moved close to the source, portable recorders are great solutions. However, many shooters simply plant the audio recorder on top of their camera or mount it to their rig somehow. This is great for gathering crowd noise, but it doesn’t do anything to solve the built-in distance problem.

It’s not really the mic’s fault. In fact, most built-in mics would sound fine in a recording studio or vocal booth. For that reason, it’s possible to repurpose your camera as a voice-over recording rig. Just control the distance between the mic and the voice and eliminate as much background noise and echoes as possible. Unfortunately, as long as the mic is mounted on the camera, it’s best used for recording ambient sound and as a sync reference for separate recorders. 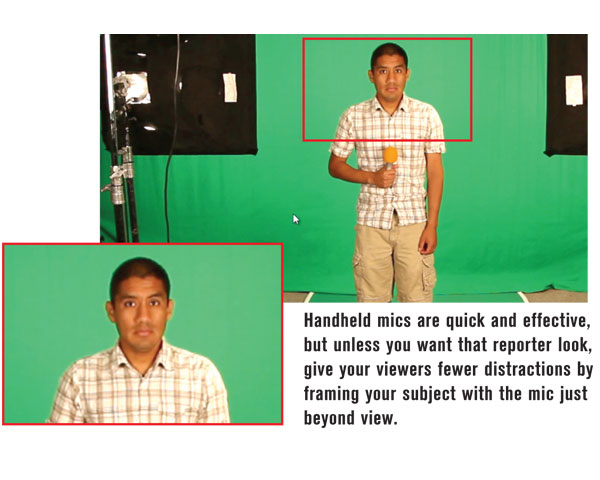 Often called stick mics, handheld mics are the type you see on concert stages or in the hands of a field reporter. Handheld microphones are portable and usually very durable. They’re also designed for rough use in a wide variety of challenging environments and applications.

When you want that newsy look, there’s no quicker way to achieve it than with a handheld mic. Put one of these in the talent’s hands and suddenly, they’re a reporter on a hot story. Another popular application is in infomercials. Using the street interview as a gimmick, the host can quickly quiz people about their experience with the product, lending authenticity to the clips.

You’ll also see this type of mic on stages, whether it’s an awards ceremony or even a live comedy show. Handheld mics are preferred for these applications and it’s a good reference point if you’re trying to emulate that look. Other common off-camera uses are for sound effects gathering and even voice-overs.

Of course, this type of mic is highly visible and you’ll never see one on an indoor news set. Likewise in sit-down interviews and other situations where the mic should be invisible. But, in the right circumstances, you can put the mic just out of the frame and still capture great audio. 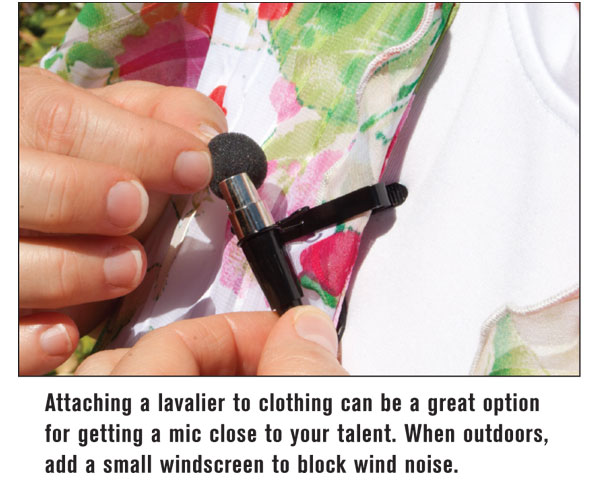 Also known as lapel mic, the lavalier mic is a tiny thing that is typically clipped to a shirt, jacket or tie. You can also attach them with tiepins, magnets and even gaffer’s tape if necessary. Because they’re so small, they often go unnoticed and are a favorite for news anchors and interview subjects. While black is the most common color, some lavaliers are available in white, beige and brown. Talk shows and news networks often stock several in different colors to match the clothing of their hosts and guests.

When using a lavalier mic outside, you may need to add a windscreen to minimize wind noise. This will add to the profile of the mic and might eliminate the advantage of the small size. In these cases, it’s common to attach the mic under thin clothing such as a shirt or blouse. This is often done with a strip of gaffer’s tape. The clothing acts as a simple windscreen and, as long as there aren’t multiple layers of clothing over the mic, it should sound fine. Make sure you check for clothes rustles before and during recording.

Another lavalier trick is using the body of the subject as a shield – to block either wind or background noise. With the wind or distracting sounds to the back of the talent, you’ll capture clearer sound and simplify your work in editing. One final tip: keep an eye on the mic clip. These things go missing faster than your cell phone or TV remote and they’re an essential part of the kit. In addition, you can’t just go to the local electronics store and buy a replacement. 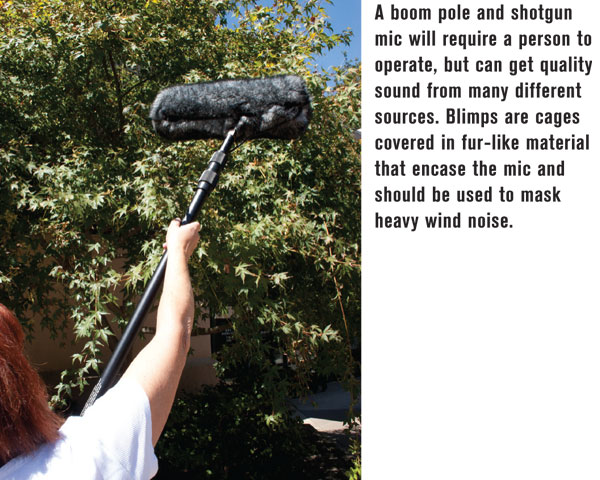 Shotgun mics get their name from their shape. Much like the barrel of a gun, shotgun mics are long and skinny. Their pickup pattern is mostly from the front of the mic like a water sprayer set to stream. This type of mic is the all-time favorite on movie and TV sets and is versatile enough to use in many other situations too.

Unlike some of the other mics, the shotgun mic isn’t necessarily attached to the talent. In fact, while it can be handheld, most of the time it’s mounted on a long pole and operated by an audio crewmember or assistant. With this setup, the audio operator can get the mic close to the talent while keeping it just out of the frame. This is usually done overhead, but the technique also works from below when needed.

Because they’re highly directional, shotgun mics do a good job of isolating the sound you want to record – as long as they’re pointed in the right direction. Monitoring on headphones is very important with this type of mic. Unless you’re doing a static sit-down interview, you can’t just set it and forget it. Keeping the subject in the pickup range can become an issue. A shotgun mic on a boom pole is still a very portable and high-quality audio solution. That’s why the pros use them.

When shooting outside with a shotgun mic, you’ll need to use a windscreen. The foam model that came with the mic is worthless with anything beyond a breeze, so take a look at a device known as a blimp or zeppelin. These are tube-like cages for your shotgun mic and the outside is usually covered with fur-like material. This breaks up the wind before it can get to the mic and should let you shoot in a stiff wind without a problem.

One type of mic we rarely mention is the parabolic mic. It’s a highly specialized device that is often used in sports broadcasts, but it has other uses too. This is a large dish with a mic placed at the focal point – much like the feedhorn on a satellite dish. By placing the mic in this location, it picks up the sound focused on it by reflections from the dish. While a shotgun mic can be very directional, a parabolic mic is more like a laser.

Using a parabolic mic, you can pick up voices, animal noises and other sounds from great distances. Instead of several feet, now you’re looking at audio gathering from several yards – or even 160 yards away – the length of a football field. The extreme pickup distance comes at a cost though. Typical parabolic mics lack low frequencies and clarity can be hard to achieve without careful aiming.

You won’t do serious dialog pickup or voice-overs with a parabolic mic, but it’s great for grabbing a football huddle, nature sounds, surveillance or maybe even reality TV audio.

Pick A Mic – Any Mic

Knowing what different types of mics are used for is helpful when recording audio for video. There’s no point in building your entire shoot around equipment that can’t do what you need. If you’re in the market to buy a new mic, this information could help you make a more informed decision. If you’re new to a certain type of mic, test things first when you have a few minutes. Also pay attention to how these mics are used in the media. It will help you get a feel for the mic and will make you look more confident and professional when clients are watching.

Any microphone can be wireless if that’s what you need. In fact, most lavalier mics are found on wireless packs already. Several manufacturers offer plug-in wireless modules that can turn any mic with an XLR connector into a wireless model. That means your handhelds, shotguns and even parabolic mics can cut the cord for even more freedom. Wireless adds it’s own set of challenges – batteries that need charging, distance limitations and potential interference – but it’s great to have the option when you need it.

In days of yore, when SD was the only D, you needed to make a project, mixing your audio into a single stereo track...