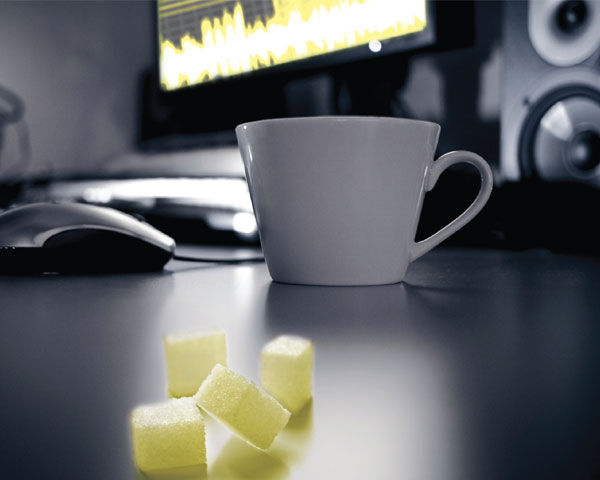 Some people prefer their coffee black, but many of us use at least a little cream and/or sugar to smooth it out a bit. The same is true with video sound. You may have captured a solid recording, but with a little tweaking here and there, it can be awesome. In production jargon, we call this audio sweetening and it’s an important part of anything you’ve seen on the big or small screen. So think of it as cream and sugar, seasoning on food or even Photoshop for sound, but audio sweetening is here to stay.

Audio editors sweeten their tracks using a variety of tools: tone control, dynamics control and time-based effects. Used alone or in combination, these adjustments make sounds bigger, fuller and give them a professional polish.

Tone control is the easiest to start with and the technique most people already understand. Just like the bass and treble controls in your car or the graphic equalizer on your music player, we can control and shape the tonal characteristics of our recorded audio. To do this, we use two different kinds of tone control: equalizers and filters. Equalizers can have anything from two to 31 bands of control and can be as simple as bass and treble knobs or as complicated as a professional graphic equalizer.

The name pretty much says it all – we’re equalizing the different tonal ranges of our recording to produce something that sounds more like what we hear in our head. If there’s too much bass in the original recording, you can remove some with the equalizer. By the same token, if the recording lacks sizzle in the upper range, add some treble back in with the equalizer. The more bands of control in the equalizer, the more accurate you can be with your adjustments.

Filters usually come in three flavors and are just single-band equalizers with more options. A high-pass filter removes the lower portion of frequencies, allowing the higher ones to go unaffected. You get to select the exact frequency in which the transition takes place. This makes it easy to remove rumble from traffic and machines while keeping the important parts of your recording. Low-pass filters work in a similar way except they remove the upper portion of the audio spectrum and allow lower frequencies through. Again, you get to pick the frequency for the filter to kick in. Low-pass filters are great for removing recorded hiss and making something sound like it’s coming from another room. A band-pass filter lets you pick a range of frequencies in the middle of the sound spectrum, removing both high and low frequencies. This is great for simulating telephone conversations and sound coming through small speakers like a TV or radio.

Dynamics is the difference between the loudest and softest parts of your recording. In the classical music world, they’re all about preserving every last bit of dynamics to recreate the concert experience. Of course, if you’ve listened to any popular music in the past 10 years or so, you know that they don’t care much about dynamics – they just want it loud. We can do soft, loud or, preferably a happy medium, with dynamics processors.

Compressors are intimidating to set up at first, but most of them have similar controls.

The first type of dynamics control is called a compressor. Compressors get their name from the fact that they gently (or not so gently) squeeze the audio signal, decreasing the difference between loud and soft. Compressors are intimidating to set up at first, but most of them have similar controls. Threshold is the audio level where you want the compressor to start working. If the threshold is too high, it will never have any effect. Too low and the compressor is working all the time. You may also see attack and release controls. These (respectively) determine how quickly the compressor reacts to incoming sound and how long it keeps working after it hears that sound. Next, there is the ratio control. This sets how aggressively you want the compressor to squeeze the sound. Ratios 2:1 through 4:1 are common for voices, but you’ll have to experiment to find the sound you want.

When processing broadband signals like a full music mix, compressors often color the sound with what is called “pumping”. The fact is that it’s hard to apply a single compressor for good sound on that type of complex signal. To help with this problem, many manufacturers offer multi-band compressors. These split the sound into three or more bands and apply separate compressor settings for each band. This is a great way to compress a final mix or fatten up some music. In fact, this is the way radio and TV stations process their audio for maximum loudness.

The final type of dynamics processor is the limiter. Limiters are basically high-ratio compressors with a maximum loudness setting. Regardless of how high the signal levels get, limiters keep them from going over a user-determined level. This is perfect for final mixes and extremely dynamic sounds like gunfire and explosions. You’ll often find limiters built into the menu systems of camcorders and separate audio recorders, providing an extra layer of protection against overloaded sound recordings. Also, if you’re piling up effects in post, the limiter is usually last in the chain.

This is a fairly broad category that includes reverb, delay, echo and other types of effects. Each of these manipulates time in some way to effect the audio signal – hopefully in a pleasant way.

Reverberation, or reverb, is the simulation of an acoustic space, whether it’s a shower stall, an underground sewer pipe or a concert hall. In the real world, each of these environments have both reflective and absorptive surfaces. Sound waves bounce off these surfaces in varying degrees and the result to our ears tells us something about the size, shape and construction of the space. Digital reverb attempts to do the same thing in the virtual world and usually does a pretty good job. Digital reverbs may or may not have a wide range of controls, but you can usually adjust the size of the space, reverb time and how absorbent the virtual room appears. You might also see pre-delay which changes the sound by delaying the time it takes to start reverberating. Another common control is early reflections, an adjustment of how soon you hear sound from virtual walls and ceilings.

Reverb is highly subjective and you’re not going to find a perfect preset for everything. You may also need different reverb processors for different tasks. Maybe reverb A sounds great on voices but reverb B is better on instruments. No problem, just plug them in and use the best processor for the job. There are even surround sound reverbs that output 5.1 or more channels to completely simulate “being there.”

Another common time-based effect is delay. Simply put, delay is just that; a delay of the sound going into the effect. Whether milliseconds or minutes, sound hits the delay processor, it waits for the set amount of time and then spits the sound out, usually unaffected. Delay is great for time-alignment of sounds like audience mics but can be used musically too.

Echo is also a delay, but it feeds a little (or a lot) of the signal back into itself, creating multiple delays that usually die off after a few occurrences. With an echo processor, you’ll have the addition of a feedback adjustment and possibly a filter or tone control to further process the echoes. This gives you some creative options and the ability to simulate certain situations like canyons, tunnels and caves.

Audio sweetening is a very subjective process; what sounds good to you may not sound that way to others. With all the sweetening tools, it’s best to have reliable monitor speakers and maybe a pair of headphones to check your progress. Start with small adjustments and only add, subtract or change what is necessary until you get the sound you want. Audition the changes by themselves and in context with the other sounds in your production. Re-tweak as needed and, whenever possible, save your settings for use on future projects. It’s easy to go overboard with most of these effects, but with some practice, you’ll be sweetening audio like a pro.

Sidebar: Plug It In

Most audio workstations and many video editing programs offer the ability to extend their audio effects section through the use of plug-ins. These virtual effects processors are all over the Internet and there are many freebies worth a look. First, check out the free ReaPlugs VST FX Suite at www.reaper.fm/reaplugs. These are some of the same effects included in REAPER and they’re impressive. Next, look at UpStereo from QuikQuak: www.quikquak.com/Prod_UpStereo.html. Simple EQ, dynamics, enhancement and stereo width in a single, free plug-in. And it looks cool too! These are just the tip of the iceberg, but a great place to start if you want to expand your audio sweetening capabilities.