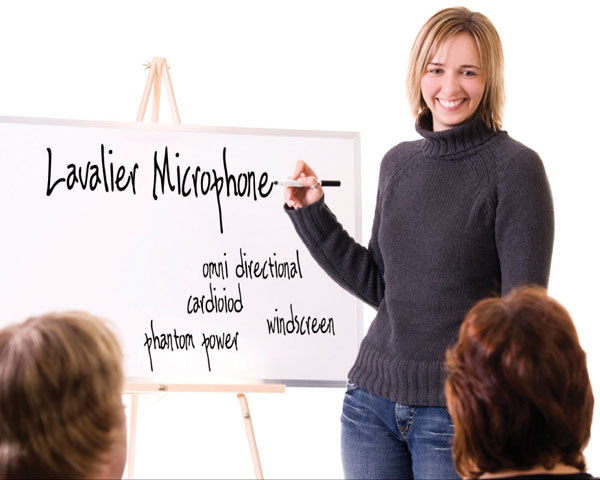 You know you need an external microphone, but which one? The built-in mic on your camera just won’t cut it most of the time. You’ve got a microphone jack but you’re having a hard time deciding how to spend your hard-earned cash. If you’re shooting sit-down interviews or news footage, may we suggest the humble lavalier microphone? They go by several names – lav, body mic and lapel mic – but the principle is the same: a very small microphone attached to the talent. There are plenty of benefits to this type of microphone, and some caveats too, so let’s spend a few minutes investigating this recording workhorse. 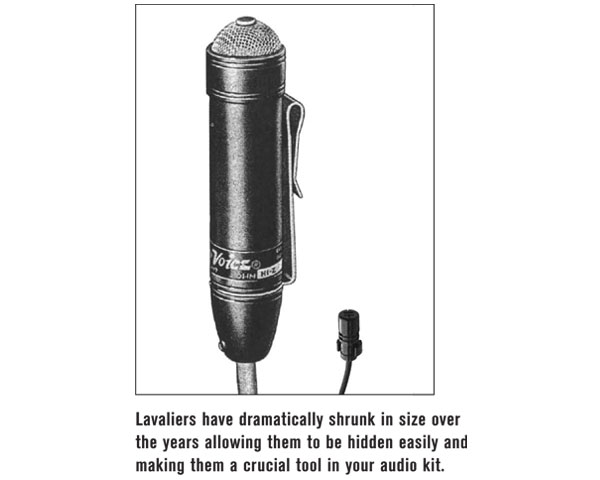 According to the dictionary, a lavalier is a decorative pendant hung around the neck. Back in the days before micro-sized condenser microphones, we had to use small dynamic mics – about the size of a cigar tube – and attach them to what looked like a necklace. The talent wore the whole thing, including the cable, outside of the clothing. And it looked pretty silly. Fortunately, condenser mics shrank in size and completely eliminated the lavalier. Broadcast people, being slow to change their ways kept the name and assigned it and its abbreviation to every body-worn mic afterward. That’s why you’ll still hear them called lavalier and lav today. In theater and cinema circles, they’re often called body mics. Regardless, we’re all talking about the same thing.

The modern lav mic is tiny. They range from pencil eraser size to that of the head of a pin. This makes them easy to hide. They also come in different colors. While black is the standard, you’ll find lavs in gray, white and beige. Mounting is also more flexible today. In addition to the tie clip mount, there are clothing pins and magnetic mounts. A far cry from the goofy necklace mount of yesteryear. 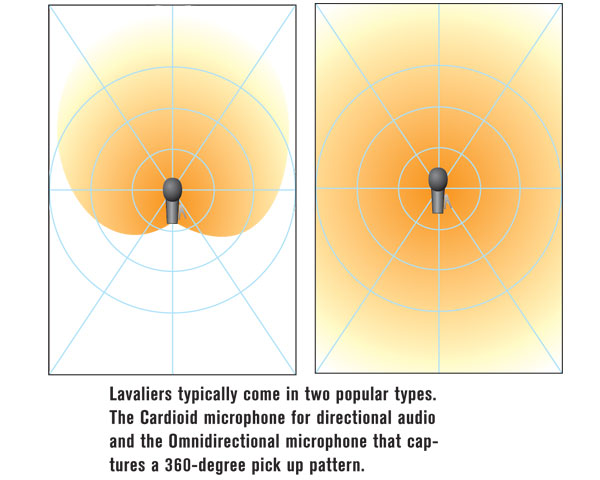 Current models also come in omnidirectional and cardioid patterns. While omni is the standard, a directional pattern could be a real problem solver in the right situation. You also have a choice between wired and wireless versions. A wired lav is the perfect solution for controlled circumstances – indoors, fixed location shoots like a sit down interview or news set. A wired lav is also a great backup on location if you have interference problems with the wireless versions. And they’re cheaper; a wired lav mic could sell for as little as $50 and excellent models are available in the $200 range. Their wireless counterparts typically start around $300 and go up from there. Of course, a wireless lav offers great flexibility minus the cable dangling from the talent. In any case, a good lav mic is highly recommended for every serious shooter.

Because of their small size, lav mics are easy to use in most situations. When shooting an interview, it’s quite common to simply clip the mic on the talent -attaching to a tie or lapel about mid-chest level. This is the standard application and, if you don’t mind seeing the mic in the shot, it’s a great way to get good sound and a fast setup. Assuming the talent faces forward most of the time, the mic always has a clear shot at “hearing” what they say. Minor head movements won’t make much difference and you’ll get a nice, clean recording.

If your shoot requires more stealth, lav mics work well there too. In many instances, the microphone should be invisible and, with a little creativity and some trade-off, it’s possible. Start by looking at the talent’s clothing. Button-front shirts offer an easy way to hide the mic while still keeping it in the open. With a little gaffer’s tape, it’s not difficult to place the mic behind the buttons. This works well with polo shirts too, just place the mic at the bottom of the button-up section and secure the cable with a little tape. You may find clothing with folds, lapels and collars. Each is a great place to hide a microphone. The trick is identifying the magic location that provides good cover yet doesn’t mask the mic element from the talent. This often takes some experimentation and there are no set rules. If it works, you win. Inevitably, you’ll have to shoot someone in a t-shirt – this is a bit trickier. The standard method is to tape the mic element to the chest with gaffer’s tape or medical tape. If your subject has a hairy chest, this may be difficult, and painful! If the talent is female, it’s common to have them tape the mic inside their bra and run the cable out the back. If all else fails, carefully tape the lav mic inside their shirt. You’ll likely see the crease where the tape lives, but those are the common options. 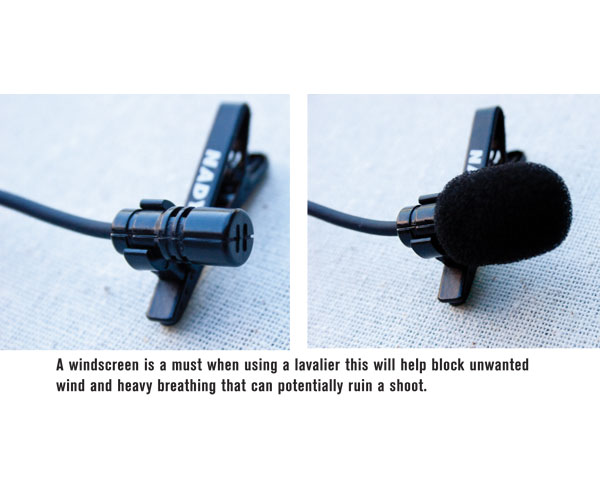 Lav mics – especially wireless ones – create some challenging situations. First and foremost, remember that you’re invading someone’s personal space when you hover over them installing a microphone. Some people are very uncomfortable with this and your people skills are very important here. If the talent seems a little embarrassed about all this, hand them the mic, tell them how you’d like it installed and send them off to the dressing room. It won’t be perfect, but take what you get. Putting the talent at ease is far more important than ideal mic placement. The same advice applies to belt pack placement. Without going into detail, for maximum concealment, some transmitter packs end up in very intimate locations. Unless the talent has made it clear they have no shame, it’s usually best to let them do the placement.

Don’t forget to use a windscreen. This is especially important outdoors but, if you get a heavy breather, they can spend the entire shoot blowing into the mic. Some lav mics come with their own windscreen but you can always buy a simple foam model or even a furry windscreen. The foam versions are general purpose but, if you have some serious wind gusts, use the furry version.

Powering your lav is important too. Most wired models offer battery and phantom power options. Phantom power is ideal but only pro cameras and mixers offer this feature. Battery power is more common but make sure you have a spare or two on hand. Many wired lav mics use odd batteries that may not be easily available. The same holds true for wireless mics, although their batteries are standard types. And please don’t use rechargables. Their voltage is lower even when they’re fresh and they have a nasty habit of running out just when you need them most. Alkaline batteries all around. It’s cheap insurance.

Lav microphones offer some serious benefits to the video shooter. They are placed close to the talent’s mouth, so you get clean, clear sound. They’re small and unobtrusive which makes them easy to hide. When placed on or near the chest, the talent becomes a human sound blocker, possibly minimizing background noise. But ultimately, you’re going to have to use them to truly learn them. We’ve given you the background information, now it’s your turn to squeeze the most out of your lav microphones.

We’ve all seen boundary microphones – those flat plates that lay on the floor or a table. Maybe you already own one, but if you don’t, I have a pleasant surprise. Your lav mic can double as a free boundary microphone. There’s almost nothing to setup, just place the mic element where you would put the boundary mic and tape it there with some gaffer’s tape with the mic pointing to the ceiling. That’s it. The omni-directional pattern effectively turns the entire flat surface into a pickup. This is perfect for board rooms, legal video and even school performances. Try it sometime. I think you’ll be pleasantly surprised.