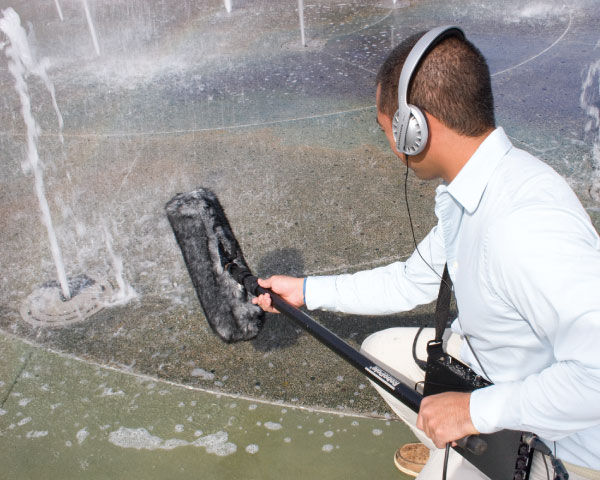 Have you ever recognized a sound effect in a movie or television show? Close you eyes and imagine the sound of the doors opening on the bridge in Star Trek. Listen for the PING that emanates throughout. Hear that musical tinkling sound as Scotty beams the captain aboard. Sounds we've heard since the '60s are as recognizable as a heartbeat.

Just like seeing a font or Photoshop filter you've used before, every sound effect has a signature that makes it easier to identify. The truth is that, just like you, the big productions grab sound effects as needed from effect libraries. It's entirely possible they're using the same library you have. Our challenge this month is to break free of the sameness of effects libraries and create something uniquely our own. You probably have all the tools already, like an audio editor bundled with your video editing software, and if you don't, there are very cost-effective options we can share. 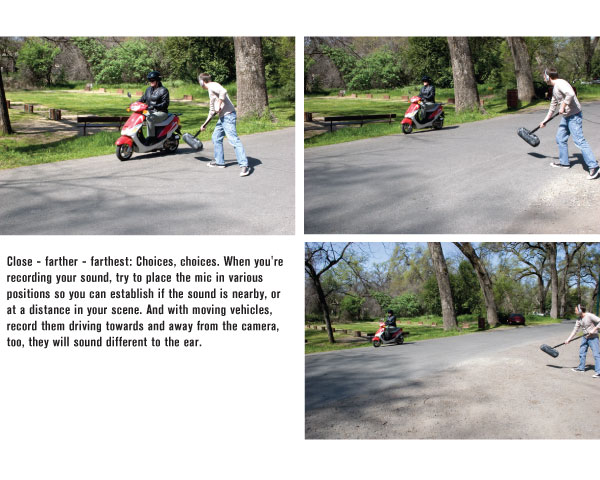 On the surface, sound effects may seem unnecessary. Can't we just record the voices and sounds as we shoot and present a completely honest soundtrack? You can do that, but I think you'll be disappointed with the results. In the enhanced reality of Hollywood, it's common to replace almost every sound – from main dialog to the smallest squeak. Your viewers grew up expecting that type of sound as they watch various forms of media. While a completely organic soundtrack is possible, it's the exception rather than the rule. The good news is that you can create big sounds for your productions, too. There is an art to it, but the basics aren't all that hard.

What Gear do I Need?

First, you'll need some recording equipment; specifically, an audio recorder, a microphone or two and a good pair of headphones. Audio recorders take many forms these days. A laptop or netbook computer with an audio interface is a very nice, portable way to gather sound effects. Using an audio editor Adobe Audition, Sony Sound Forge or a number of other software packages, you'll have a fully mobile recording studio. If you're short on software, look for Nero's Wave Editor (the audio editor bundled with their disc-burning package) or download the freeware Audacity. Both work great for basic recording and editing. Assuming your camcorder has an external microphone jack; it also serves as a good, basic audio recorder. Even the tiny Kodak Zi8 has a mic jack and will work well in a pinch. If you'd prefer a more dedicated solution, consider the Zoom H2. For under $200 you get four built-in mic capsules and the ability to record surround sound too.

As for microphones, start with what you have. If you're already using a handheld or shotgun mic for productions, try that first. Even a lapel microphone works for sound effect gathering. Just make sure you use a windscreen if you're going outdoors. Do some test recordings and evaluate the sound quality. If you discover that a microphone upgrade is needed, at least you have a baseline to shop with. As for headphones, any good pair of isolating headphones should work. If you use headphones for video shoots (you do use headphones, right?) they are a great starting place for your sound effects recordings. Just like mics, start with your existing gear and use that as a reference point for any future upgrades. 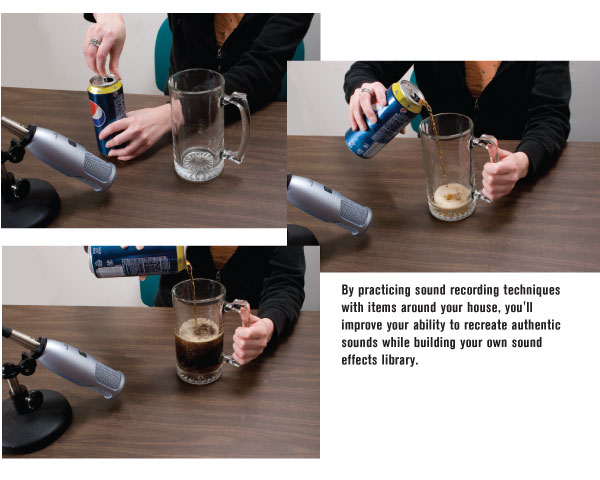 Get Real With Audio

Many Hollywood sound effects are substitutes for the real thing – often bad substitutes. Car guys hate this. If a little scooter whizzes across the screen, it should be the sound of a scooter, not a Harley Davidson. So, when you're recording sound effects, try to be as authentic as possible. If your production showcases the hero stepping out of a giant Hummer H2 and slamming the door, don't record the door of your Toyota – record the Hummer. You get the point.

As you're recording, there are several things to monitor. That door slam will start with a giant spike in sound level. Make sure you have plenty of recording headroom to eliminate the possibility of signal overload and distortion. If anything, record a little lower than normal – you can always bump the volume in post. Also, listen closely to the sound. Placing the mic close to the source may produce a sound with big impact, but that may not suit the scene. For safety, record several versions. Start with a few takes up close, then move the microphone back a bit and grab a few more takes. Finally, move the mic back even further – maybe somewhere close to the original camera position – and record some more. Later, when you edit, you stand a good chance of finding that one magical take that fits perfectly in your project.

The Sound of Everyday Stuff

Of course, you don't have to go outside for all your sound effects. Common household noises come in handy too. Even if you don't need them today, practice recording some appliances around the house. See if you can master recording the shower or the fireplace crackling. Stick a mic by a soda can and record the process of opening the drink and pouring it into a glass. If you'd like to experiment with Foley sound effects, try punching a couch cushion or a beanbag chair. These sounds can substitute for flying fists in a fight scene. Just record something so you can take it to the computer and experiment.

Out of This World

Legend has it that in his 1938 Halloween radio presentation War of the Worlds, Orson Welles was looking for just the right eerie creaky sound for that one dramatic moment when the metal hatch of the Martian space ship's door opened. Not having a sound FX library at hand, he and his audio engineers went looking to create their own out-of-this-world sound. They finally found just the right fit: a mayonnaise jar being slowly opened while hovering inside a toilet bowl. When you take away the visuals, sometimes the audio can fit just right and the audience has no idea. Some examples include putting cornstarch in a leather pouch for a snow-crunch effect, balling up cellophane for a fire-crackling effect, and a pair of gloves for a bird-flapping-wings effect. Another good idea that artists don't often think of is reversing sounds that you have recorded using an audio-editing program on your computer. Sounds such as piano string hits, crystal glass hits, and human voices can make for interesting effects when played in reverse. They can add emphasis to moving titles and graphics and can even give a sense of foreboding in horror films. 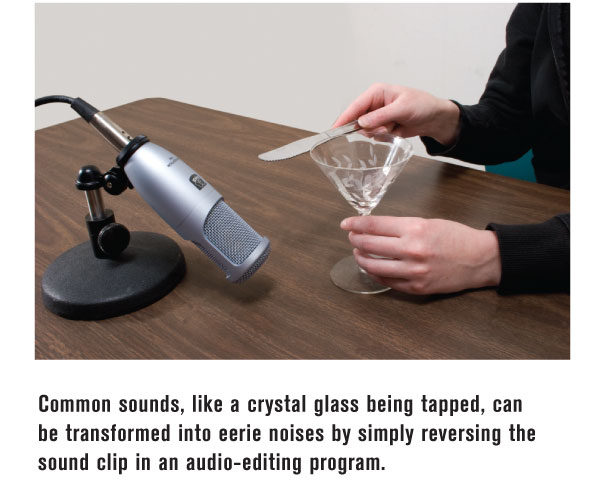 Clean Up Your Sound

The time and effort you spent recording good, original sound effects will really pay off once you start manipulating them in post. Your audio editor has some very interesting filters and effects in addition to simple volume and pan controls. Play with them. Remember that car door slam? Let's say you found a take you really like, but it just needs a little more punch. Start by adding a little low-end boost with an equalizer. If you need to take it to the next level, try a sub-harmonic synthesizer or enhancer. It's also possible to pitch-shift the sound down a few steps and add it back into the original for some extra crunch. Maybe all you need is one close and one distant take mixed together. Whatever you want, it's probably available if you play with the sound long enough.

As you're editing, don't forget the housekeeping. Trim the sound effects at the beginning and end, adding a fade-in or fade-out as needed. Apply noise reduction if you have to, but don't over-do it. You want the cleanest, most natural sound possible. Archive your raw, unprocessed recordings for future use and save the edited versions in an uncompressed format like WAV or AIFF. A standard video soundtrack is recorded at 48kHz, 16 bit. If you've recorded your original sound effects at a higher rate, archive that and downconvert to 48/16 for the video. The higher quality may come in handy some day.

Sound effects libraries were created because editors just like you needed just that perfect sound. From bug noises to train whistles, all you have to do is search for it, and a sound effects library probably has it. They use the best tools, record in the most pristine conditions, and offer the highest quality sounds possible. But sometimes, it's fun to see what you can achieve on your own. Recording and editing effects is tiresome, requiring extra time in the field and in post. But when done properly, your original recordings will enhance the production and lend a professional shine to the soundtrack. It's fun and creative too, so give it a try.

Sounds from the World

We know you don't always have time to record and edit original sound effects. But rather than reaching for your SFX library next time, consider joining the Freesound Project. This is a group of recordists from all over the world, recording and sharing sound effects with each other. Membership is free and gives you the ability to search thousands of sounds by keyword and category. There are some really nice effects on the site and some duds too. Don't forget to give back to the project by uploading a few of your own effects.

Have you ever needed the sound of someone talking on the phone? It's pretty easy to fake with some audio filters, but what if you could have the real thing for free? Many cell phones today record voice notes. Most record them in a low quality, uncompressed format but it's perfect for sound effects. Just start the recorder, record the dialog and save the file. Plug the phone into your computer, download the file and drop it into your audio editor. It may take a little cleanup, but you'll have a free, authentic telephone recording, complete with breath pops and handling noise.