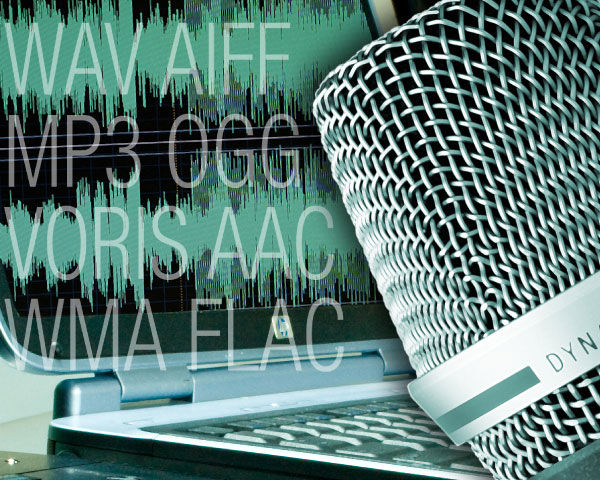 It’s an understatement to say that the Internet has changed pretty much everything in our daily lives. Digital audio was one of the first forms of media that really took off on the Internet. Today, we buy our music online, listen to radio and download podcasts, which was all impossible just a few short years ago. As digital video overtakes audio as the popular Internet media, there are still many things a video producer can do with digital audio online. There are a handful of digital audio formats floating around on the Internet and each has its strengths and weaknesses. Let’s take a look.

The uncompressed WAV file – and its Mac cousin, the AIFF file – are reference standards when it comes to digital audio. As uncompressed formats, they are perfect digital copies of the source and have no peer when discussing quality. Unfortunately, they’re also huge; a CD-quality stereo WAV file is roughly 11MB per minute. With today’s broadband connections, that’s not as big a barrier as it once was, but that’s still a lot of bandwidth to move a single file. Regardless, WAV files are still found on the Internet. You’ll see them on sound effects sites, product demos and, occasionally, as a music download when quality is more important than file size. If you need to send a WAV file, don’t plan on emailing it. Even with the generous 20MB attachment limit of many email services, it’s hard to squeeze an uncompressed file into the average inbox. Instead, post it for downloading on a hidden page of your website or use one of the large-attachment services like DropSend.com or YouSendIt.com. If sound quality is important, the WAV file is the only way to go.

MP3 is the granddaddy of compressed Internet audio and has become the de-facto standard for online audio distribution. MP3s are often 1/10th the size of their uncompressed counterparts which makes them perfect for passing around on the Internet. A typical song compressed with MP3 encoding might be only three or four megabytes in size. Of course, the decrease in file size comes with a price. MP3 stands for MPEG1, Layer 3 Audio and is a part of the MPEG1 compression standard. It relies on perceptual coding to reduce the amount of data required to play music. The encoding algorithms scan the original source and decide what parts of the program are important and what parts aren’t and then squeezes the audio hard to achieve its small file size. MP3 bitrates are adjustable so, when you encode audio, you decide the quality level by the bitrate you allow. For instance, the iTunes MP3 encoder works at a default value of 160kbs which makes a pretty nice sounding file. The massive popularity of MP3 indicates most people can’t hear the difference (or don’t care) but MP3 is only one of many compressed sound formats. Regardless, it’s all over the Internet. Your editing software likely supports it, both for input and output and it’s not going away anytime soon.

If you’re not familiar with Ogg Vorbis, that’s OK. It’s not exactly mainstream yet, but it has some benefits over MP3 and many of the other encoding formats. Ogg is actually an open-source media container that houses audio and video. Vorbis is the audio portion and is also open-source, meaning that there are no license fees or royalties to pay for implementing this encoding technology. In blind listening tests, many people find that Vorbis-encoded audio sounds cleaner and more natural than other formats. For instance, a 96kbs or even 64kbs Vorbis file holds up nicely against a 128kbs file using another encoder. This means higher quality and smaller file size. While it’s unlikely that Ogg Vorbis will dethrone MP3 or any of the other technologies, it is used by many recordists on the Freesound Project (www.freesound.org) – a free audio effects site. Ogg Vorbis is also popular with some independent music composers, those creating media on the Linux operating system and is built into many of the popular video games.

The Advanced Audio Coding format, or AAC, is a standardized part of MPEG2 and MPEG4 and was designed as an upgrade to the MP3 format. It lived in obscurity until Apple started using AAC as the encoding format for iTunes and the iTunes store. AAC is truly an advancement over MP3. It supports up to 48 audio channels (MP3 is limited to 5.1) along with many streams of data and other information. Until recently, the only widespread use of AAC was with iTunes downloads. Because AAC can contain Digital Rights Management information, it was deemed ideal for distributing music online. Of course, today, DRM is almost a thing of the past and AAC has come more into its own. In the last year or so, AAC has become the preferred audio format for videos uploaded to video sharing sites like Vimeo and YouTube. Along with h.264 encoded video, AAC audio makes a nice, high quality bundle and can minimize the effects of the heavy compression applied to distribute video projects to the masses. If your NLE doesn’t support output to AAC, there are alternatives. The freeware program Handbrake has encoders for most of the popular formats and can easily convert your finished video from a standard format to an Internet-friendly version, leveraging the clarity and flexibility of AAC audio.

The Windows Media platform includes its own, proprietary audio format, called WMA or Windows Media Audio. However, unlike most proprietary formats, WMA is fairly widespread and supported by most of the major audio and video software packages. Obviously supported by Microsoft’s Zune and Xbox platforms, WMA is also included in unrelated programs like Google’s free Picasa program. As a lossy encoding format, it shares the pitfalls of all compressed audio. At higher bitrates, the audio quality is excellent, but it falls apart quickly at lower bitrates. WMA is excellent for passing rough mixes around via e-mail, but make sure your listeners use Windows computers. Macs and Linux machines often have trouble playing Windows Media formats. If you prefer Windows Media Player to iTunes, WMA should be your encoding format of choice.

Possibly the best of both worlds, the Free Lossless Audio Codec or FLAC is a bit like ZIP files for audio. With FLAC, audio is encoded offline like any other compressed format but, unlike the others, FLAC files play back as identical copies of the original. They are uncompressed on the fly from the playback software. FLAC is a great way to squeeze some extra storage space for your audio masters. A typical FLAC encoded audio file is 30-50% of its original size. DAWs (digital audio workstation) like Adobe Audition, Reaper and even Audacity all include some support for FLAC files. There are even a few portable media players that support the format. Growing in popularity in recent years, look for widespread FLAC support in the near future.

Encoding audio for Internet distribution might seem like an easy task but, as you can see, there are several format options. If size is no barrier, choose WAV, AIFF or FLAC. If bandwidth is an important consideration, a compressed format is in order, but consider your audience and application. If it’s for an online demo, MP3 is universal. However, if the file will be used in a production, make sure you send the best quality possible with an eye to compatibility for the recipient. Try this test: find a favorite piece of music and encode it in various formats and bitrates. Grab the headphones and do some critical listening. You may be surprised at the difference in these Internet audio encoding formats.

Imagine you’re a media producer somewhat isolated in the Ozarks (like me). You’re creating a commercial that will show on three different cable networks and you need the best voice-over artist you can afford. There’s nobody close, so what do you do? Through some connections, you find “THE VOICE” in a major city hundreds of miles away. You email him the script, meet over webcam to discuss the particulars and, in a couple of days, he sends you the perfect voice-over as an email attachment. This is just one simple way to leverage the power of modern media formats and the Internet.