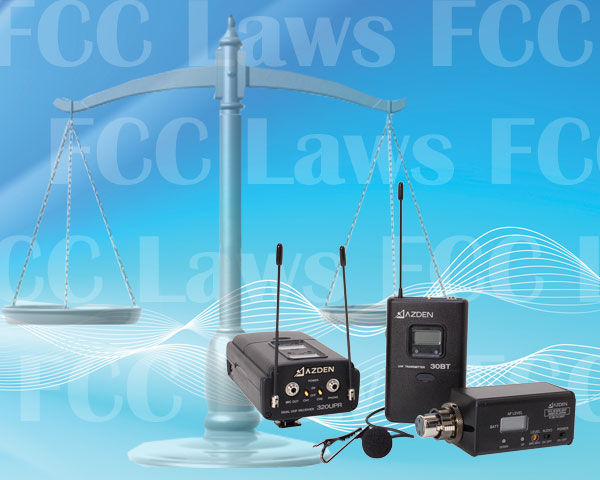 Wireless systems have been around since the 1980s and digital television is here to stay, but the fallout still remains. Countless legacy devices became instantly obsolete in February and June of last year while others are phasing out over time. One device of particular interest to video producers is the wireless microphone. How does wireless audio fit in the world of digital television? Will you have to adapt your production methods to this brave new world? Unfortunately, there’s no simple answer. As they say, we’ve got some good news and some bad news.

The whole digital television thing started in the mid-1990s when the FCC decided that it was time for the United States to end analog television broadcasting and transition to a digital model. Nothing wrong with that, right? As media producers, we live in a digital world so a move to digital TV should be a benefit – at least in the long run. A system was chosen and broadcasters were given deadlines for phases in the ramp-up to digital. Deadlines came and went, revisions took place and new orders were issued. Fines were levied and broadcasters had to seriously think about how to implement this new system. 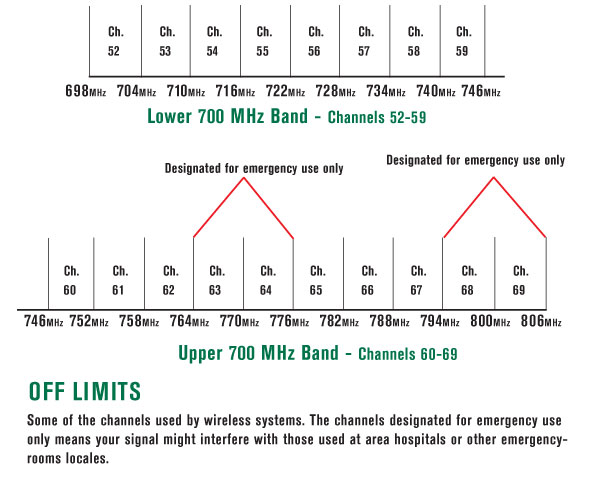 Test systems were put in place in major markets and a handful of brave broadcasters started pumping digital signals into the air. That’s when things started to get messy. Hospitals reported interference with medical equipment and many others started experiencing odd problems with their gear – including wireless microphone users. Over time, the systems were refined and an actual standard emerged. Equipment manufacturers also began to redesign their devices to conform to the upcoming transition.

Then, a new question emerged: what would happen to the frequency spectrum where the old television channels lived for decades? The answer: the spectrum would be auctioned off to the highest bidders and re-purposed for public service, Internet access and a variety of other yet-to-be-designed uses. Bidding wars began with all the wireless carriers and even Google jumped into the fray. It was messy and confusing for many – from the officials down to the consumer. Several FCC chairmen oversaw the transition and, finally, it’s done.

So, in 2010, we find ourselves dealing with the new reality of DTV and, overall, it’s worked out fine. However, some of our beloved production equipment is affected by the new digital channels. Specifically, wireless microphones that used to live and work in the frequency ranges now occupied by digital television channels. As of February 19, 2009, wireless microphones are not allowed to operate in the 700 MHz spectrum at all. That means, if your equipment is older or unable to change channels, you run the risk of serious interference or, worse, a fine for operating in the reassigned frequency ranges.

Wireless microphones are considered a secondary usage of the frequency spectrum. In simple terms, that means you’re on your own when using a wireless microphone. If you run into interference, it’s up to you to resolve the problem by either returning your system, minimizing working distance or any other solution you can find. In addition, if your wireless system causes interference for anyone else, it’s your responsibility to retune or stop using the equipment. While these rules aren’t much different from the past, the frequency ranges have changed. This makes interference more likely and solutions harder to find.

There’s also the issue of the so-called “white space devices”. White spaces are the frequency ranges that fall between the DTV channels and reallocated channels. Several companies are working on new devices that use these white spaces for communication, data transfer and networking. Standards are fuzzy for these new devices and their impact on wireless users is unknown right now. As a secondary user of the frequency spectrum, wireless mic owners may have new issues with interference in the future and nobody really knows what will happen with white space devices. 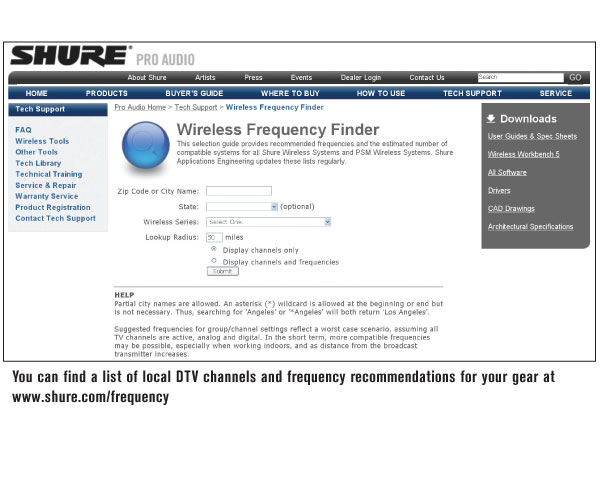 We spoke with several wireless microphone manufacturers and they gave us cause for hope. First, all wireless mics sold today are compliant with the new rules. Older, non-compliant models are discontinued and, for a time, some manufacturers even offered a trade-in program. Rest assured that if you’ve purchased a new wireless mic system in the past year or so, it’s legal and should work correctly around DTV channels. Second, wireless manufacturers have ongoing programs in place to help refine their products and help users get the most from their equipment. For example, Shure has a list of local DTV channels and frequency recommendations for your gear at www.shure.com/frequency. Third, wireless manufacturers are very involved at all levels of legislation, rulemaking and implementation. They are active as consultants on advisory panels and, when something comes up that impacts their users, they make their voice heard.

We’ve seen many wireless microphone systems come and go over the years. To be honest, some were a little embarrassing. However, today’s systems are literally state-of-the-art. They use the latest designs and make it easy for the user to comply with the new DTV rules. The new systems reject noise and interference better than ever. Now, when you invest in a modern wireless mic, you can rest easy knowing that it will be compliant.

Wireless microphone users have always had challenges with their equipment. Reception range and interference are always issues and the new rules don’t really change that. However, there are new signals in the air and we can’t be cowboys with our equipment any more. The spectrum is getting crowded and, as wireless users, we just have to deal with the new challenges. However, the manufacturers have our back and the new equipment fits perfectly in the new wireless food chain. If you’re considering a new wireless microphone purchase, relax. Do the research and find the equipment that best suits your production style and budget. 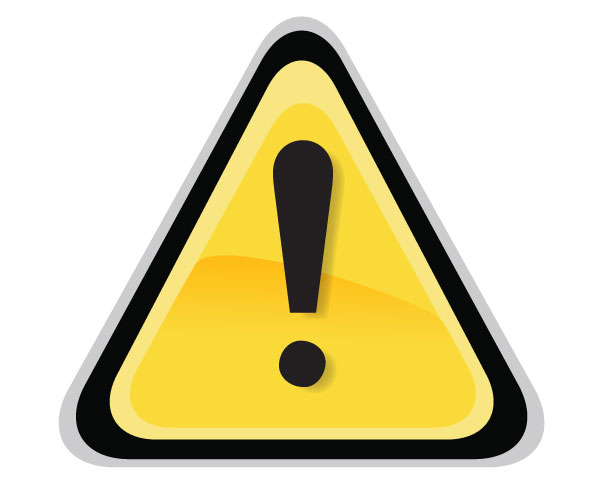 Although all mic manufacturers are working with the frequency changes set down by the FCC, there might be some wireless mics on the market that aren’t in compliance. In particular, some knock-off mics from out of the country might be lower in price for a reason: they can’t sell them in the U.S. due to their fixed 700MHz spectrum range. Also, with proper care, good mics can last forever, and they last so well that you might find a good number of second-hand older mics on auction sites like eBay. Do your research before you buy low-priced knock-offs or used equipment. You might be putting your money into a hole you can’t recover.

Many mic manufacturers are offering rebates. If you want to return your old mic and get a new one, check your company’s website for more. Just this January, PC World wrote that the FCC is getting tough on errant wireless mic manufacturers, telling them they better “get off” the 700MHz spectrum band, “or else.”. Read more about that here. To find out more on this subject, you can also go to Digits Over the Air to find out more about the FCC and DTV changes in store for video producers.

Obsolete in an Instant

In February 2009, two of our local television stations made the switch to digital – and I lost an expensive piece of equipment. I’d owned this particular wireless handheld microphone system for years and used it from time to time. Now, with the digital transmitters on, the only thing coming through is static. It’s an older unit with a fixed frequency, so there’s no way to change channels and I can’t sell it either. Some have suggested I donate it to an overseas ministry or non-profit organization. I’ll have to look into that. In the meantime, it’s gathering dust in the garage.