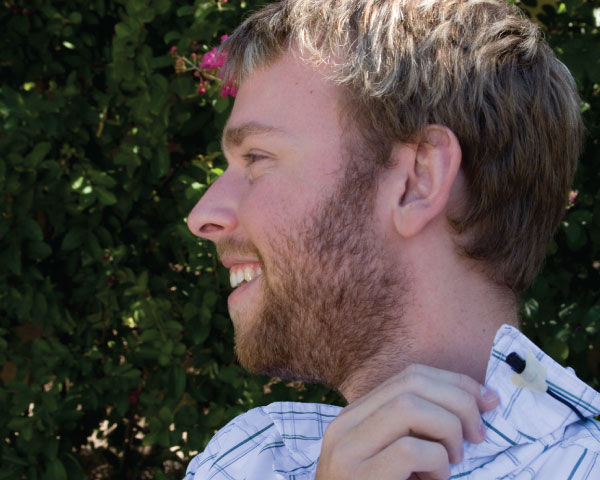 Today’s lapel or “lav” mics are small and unobtrusive, but sometimes, you still need to hide one. There are plenty of shoot situations where hiding the lav is helpful, but where to put it? Fortunately, there are lots of options and, if you’ll stick with us for a few minutes, you will know how to use 10 of the most popular locations. You’ll need some gaffer’s tape, some clear medical tape and maybe a safety pin or two. Get your tools together, and let’s go hide a lav mic. 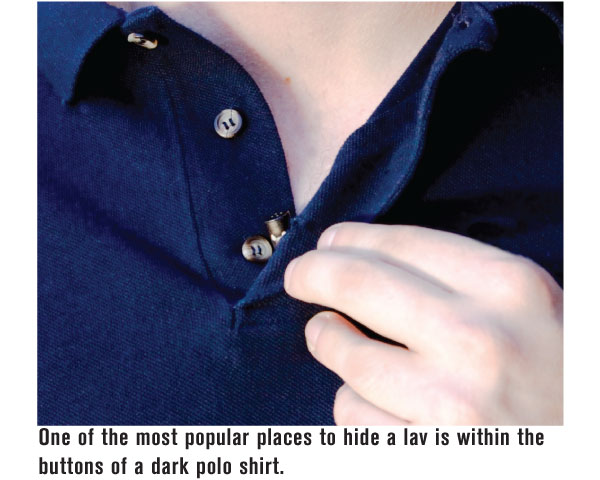 Polo shirts have that distinctive short row of two or three buttons. Where the opening stops is a great place to hide a lav mic. This works especially well on a dark shirt. Start by snaking the mic and cable underneath the shirt to the opening and then, with some gaffer’s tape, secure the mic element in the bottom of the seam. You may not have room for the windscreen, but this location is a best-case scenario. The mic is positioned low enough for consistent levels and shouldn’t sound muffled. If the shirt is dark, no one will ever see your handiwork.

While we’re still thinking about shirts, have you ever considered hiding a lav mic in the talent’s collar? Again, darker shirts work best, and this technique works best if you’re shooting an interview or something where the talent’s back won’t show. Run the wire up the back of the shirt and, using gaffer’s tape again, secure it at the back, under the collar. Next, run the mic around the side of the collar, placing it just inside the opening. Tape it down and call it good. You can usually hide the windscreen here too, so it will work outdoors in a breeze.

This method has some spy flair. Thick, dark glasses temples are currently in style, both in regular glasses and sunglasses. Why not hide the mic inside the temple? It almost becomes a headset mic this way. This technique works best with a couple of caveats. First, your talent needs hair to hide the cable. Second, if the talent is wearing regular glasses, you may want to shy away from extreme closeups. Regardless, you run the lav cable up over the ear and then tape the mic element inside the temple – make sure it is far enough forward to keep it from rubbing on the face. 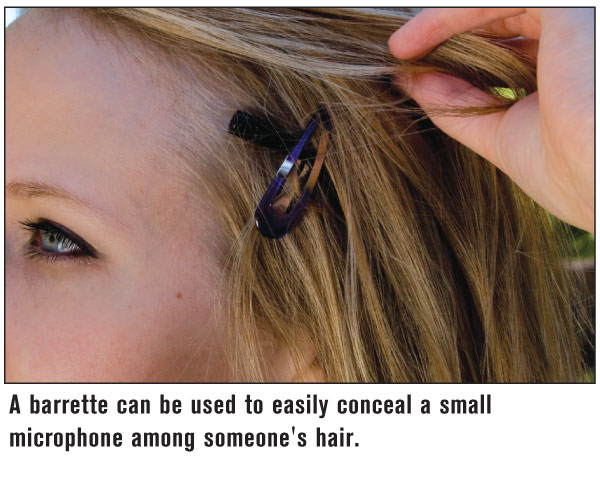 Speaking of hair, did you know you can hide a mic in someone’s hair? It’s a tried and true theater technique and will work in some video situations too. Obviously, this requires some big hair and a very small mic, but this is a very unique way to hide a lav. Basically, you simply thread the mic through the hair, starting at the back and working your way up to the edge of the forehead. You need just enough hairline to hide the mic, but that’s about it. Some bobby pins or barrettes will secure the cable and mic element.

All right, I know this one is a little racy, but it works. You should explain this technique and let the talent work it out in the dressing room. In its simplest form, you use clear medical tape to secure the mic in the cleavage, just out of sight. Some additional tape is used to route the cable to the beltpack. This works great on evening gowns and, if you watch closely, you can see this method in use during various awards shows. The alternative is to tape the mic to the bra in the cleavage area and then route the cable accordingly.

Let’s give the men equal time too. Taping a lav to the chest is fairly common in movie production. The mic is applied during costuming and often installed with clear medical tape. Anywhere on the chest is fair game if clothing won’t rub on the mic element, but man-cleavage is always preferred. Alternatively, if the talent is wearing an undershirt, gaff tape the mic inside the shirt. This often minimizes clothing rubs and still maintains a clear sound. By the way, gaffer’s tape comes off clothing fairly easily, but it is murder on chest hair.

If your talent is wearing a costume or other clothing dedicated to the shoot, consider installing a lav mic in the pocket. A pocket T-shirt is soft and provides a natural windscreen for your mic. Cabling is similar to the chest or cleavage method, but route the mic element through a tiny hole in the back, resting the mic in the bottom of the pocket. You will probably need some tape to keep it in place but, if the shirt is loose and not too clingy, both mic and cable will be invisible. 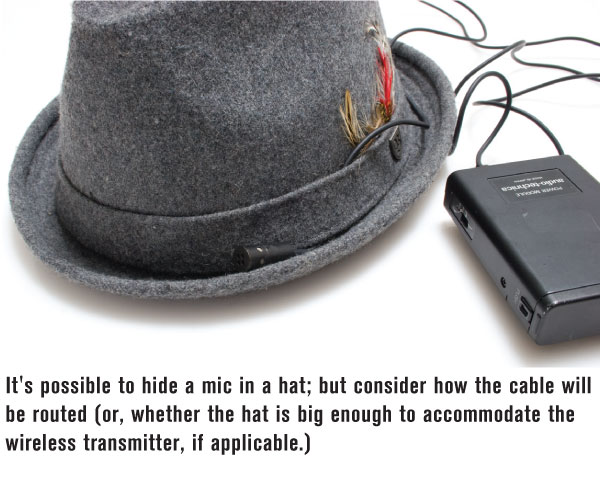 This is another technique borrowed from the theater. If the talent is wearing a hat with a brim or bill, consider hiding the lav mic there. Of course, it would have to be a solid hat, not loose straw or mesh. And, the darker the brim, the better to hide both cable and mic. This technique could be combined with the hair technique to hide the cable and exit the mic on the side of the head. This one is a bit of a stretch for video production, but if you need options, this one could save the day.

I once saw a theater production where the narrator carried a large walking stick. His costume would have been very challenging for hiding a lav, and I wondered how they had done it. During intermission, I introduced myself to the sound guy, and he explained that the wireless lav was actually built into the walking stick. Genius! While you won’t pull this trick out on any random shoot, the idea is very clever. As you can guess, this technique requires quite a bit more preparation. But store the idea away; it could come in handy some day.

In video production, we often tell the viewer what to think through set design, lighting, costumes and camera angle. If your production has a newsy flair, why not just plant the lav out there for all to see?

Watch the news, and emulate how they use a lav mic. It’s usually clipped to a lapel or collar, with windscreen installed, and the cable is looped behind the mic and fastened with the clip. Route the cable through the clothing, out of sight, and don’t forget to hide the belt pack. That may be all it takes for you to create an instant news anchor.

It’s Up to You

While this list outlines many of the popular ways to hide a lav mic, it’s certainly not the whole story. Every shoot situation is different, the talent is different and your creativity will determine how to best hide the mic. Don’t forget the clothing factor: clothes make rubbing sounds on our little lav mics. Do everything possible to minimize that while still getting the clearest sound possible.

Hiding a lav mic is a compromise for aesthetic purposes. The quality of sound will certainly be diminished, but with good placement, the impact will be small. Get creative and make the most of it.

Sidebar: What About The Beltpack?

The majority of lav mics in use today are wireless. That means that in addition to hiding the mic, you also have to hide the beltpack. Some favorites are jacket pockets and purses but often, you must be more creative. Try clipping the beltpack inside the pants at the small of the back. With loose clothing, they can also be attached inside bra straps. I’ve taped them on backs, inside legs and even hidden them in hats. My personal favorite is in the back pocket as a replacement for a wallet. Don’t forget talent comfort. They will have to wear this for a while.