A story on balanced and unbalanced audio might belong in a classic world of Good versus Evil. Alas, the subject isn't as exciting but it IS quite important to video production.

In the battle for Audio City, Balanced Man stands alone as the only hero left to fight the evil Unbalanced Signal… Well, that's how this article was going to start, until I really started thinking about it. You see, in the real world, balanced audio signals are the reliable, professional way to go, while unbalanced connections are prone to problems. That didn't make for much of a villain. At the same time, there are many legitimate uses for unbalanced audio. That left me with more of a superhero and a sidekick that could work together, but with no substantial enemy. It's a work in progress. In the meantime, I think we'll just discuss the differences between balanced and unbalanced audio connections and how to use them both in your productions.

The concept of a balanced audio signal can be difficult to grasp since you can't see sound – either in the air or as it's converted to electricity and traveling down your cables. But we can get a better look once it's inside the computer. Open an audio file in your favorite sound editing application. The first thing you'll notice is a center zero line with information above and below the line. Zoom in a little closer and you'll see that the audio waveform is evenly distributed in the upper and lower regions. This is a balanced audio signal. Using the zero line as a reference point, the audio contains equal amounts of positive and negative information. This is seen in the movement of the woofers in your home or car stereo. With no signal, the woofer cone sits in a neutral – or zero position. When an audio is played through the speaker, the woofer travels forward and backward in response to the positive and negative portions of the audio signal.

A balanced audio connection works the same way. If you look closely at the end of an XLR connector, you'll see the pins numbered 1, 2 and 3. Pin #1 is the zero voltage or ground connector. Pin #2 carries the positive portion of the audio signal while Pin #3 carries the negative portion. Many years ago, telephone engineers discovered that this was a great way to send audio signals very long distances with a minimum of loss. Later, the broadcast world found that balanced audio connections helped eliminate interference from transmitters and other signals. Finally, the professional audio world signed on and today, you'll find balanced audio connectors on everything from microphones to mixers and most of the devices in between. 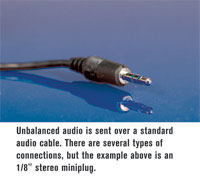 But What About Unbalanced?

Using our previous example, imagine a zero line with all the audio information above it. It looks a little odd, but that's how unbalanced audio works. An unbalanced audio connection has two electrical connections: a positive or signal wire and a zero or ground wire. You can also see this type of signal at work if you can find an old speaker and a 9-volt battery. Simply touch the battery across the terminals of the speaker and then release it. You will see the speaker cone move in one direction rather than two because it's receiving an unbalanced signal – zero and positive voltage only. With nothing to balance things out, unbalanced audio connections don't travel well over long distances and often pick up interference from nearby transmitters and electronic devices.

However, there are plenty of perfectly good uses for unbalanced audio signals. Most electronic musical instruments – guitars, basses and keyboards – use unbalanced audio outputs. Since the signal only needs to travel a few feet, this is a simple, effective solution. Many budget wireless microphones use unbalanced audio outputs too. This keeps costs down and, since you're probably plugging the receiver directly into a mixer or camcorder, there is little chance for interference. The microphone and line input connections on your computer soundcard are unbalanced too. Because of this, you will sometimes hear faint noises in the background when you move your mouse or type on the keyboard. Computers generate a lot of internal noise and the unbalanced connection can't keep it all out of the audio. You can also hear the effects of noise pickup if you place your cell phone near some computer speakers. 25 feet is the maximum length of cable for an unbalanced signal, and you'll do well to keep it as short as possible. 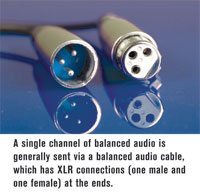 OK, balanced audio is great, but maybe your camcorder doesn't have a balanced audio input. Now what do you do? Don't panic! There are several ways to adapt a balanced audio signal to your unbalanced camera input. The best way to do this is with an adapter specifically built to convert balanced signals into something that works with an unbalanced 1/8" input jack. Beachtek and Studio 1 Productions (among others) offer excellent adapters that also serve as basic mixers. You'll find them online and in the back pages of this magazine. These adapters do several things. First, they convert the input from the balanced XLR connector to an unbalanced signal. Second, they offer a simple volume control or mixer for the input(s). Finally, the adapter outputs the signal through a small 1/8" connector that is perfect for plugging into most camcorders. Starting at less than $200, these adapters are the ideal way to provide clean, reliable audio to your camera.

Of course, there are alternatives. You can build an adapter out of parts from a local electronics store (see sidebar) or, if your audio needs are very basic, buy a balancing adapter. Generically known as an XLR-to-1/8" male adapter and available for $10-20, this is audio adapting in its simplest form. No mixer, no phantom power, no options, just a plug-and-go adapter when all you need is one microphone. When searching for this type of adapter, look for manufacturers such as Remote Audio, Comprehensive and Monster Cable. The big online supply houses have several options for you.

In a perfect world, all camcorders would have balanced inputs. Sadly, they're only available on the big cameras and, as consumer and prosumer cameras continue to shrink, it's unlikely this will ever change. But, as long as you know the benefits of using balanced audio signals and connections – and how to adapt them to your gear – it really doesn't make any difference. As Balanced Man always says, "Balance And Conquer" or something like that. Like I said at the beginning, it's a work in progress.

Side Bar: Build It Yourself

For about $55 you can build a simple adapter that will connect balanced microphones to your 1/8" camcorder input. We'll use Radio Shack part numbers for this project, but you can find similar items elsewhere. In fact, you already have them tucked away somewhere. First, the XLR part consists of two (2) #274-016 adapters. They plug into two (2) #274-141 1/4" couplers. Next, a pair of #274-320 1/4" to RCA adapters. And finally, a #42-495 1/8" stereo-to-RCA cable. Stack them together in this order and you'll have a simple, functional adapter that won't strain your mic jack or budget.