Modern editing software offers all the editing power of an old-school tape-based editing suite, but it also provides effects, titles, still store and a full toolbox of audio goodies.

From a practical standpoint, you can carry an entire production suite in your laptop computer and take it with you anywhere. One of the nifty, if often overlooked, audio features is the ability to record directly to the timeline. That’s right, you don’t have to open a dedicated audio program to record, edit and finish audio for your projects. This month, we’ll spend some time investigating this hidden feature and learn how to leverage it in your next production.

Back in olden times, when videographers shot, edited and delivered all video on tape, producing a custom soundtrack was a bit of a challenge. There were two approaches: cheat with the independent audio tracks on the edit deck, or produce on multitrack audio equipment and synchronize with timecode. Neither option was great, but that’s how we got the work done. Big, chunky edit decks often had two or three independently-accessible audio tracks, meaning you could record and play back on any or all of them. First, you edited the video, using one audio track for your natural sound. After locking the edit, you recorded music and sound effects to another track and, finally, your voiceover occupied the final track. During playback, all three channels played in sync, but the mix was determined by the level you recorded. If it was wrong, you did it again. What a pain!

The other option was to print timecode to one of the tracks and synchronize it with external audio equipment – a dicey proposition at best. You mixed audio from the edited video with other elements in an audio studio. This offered a great deal of control, but getting it all back to the videotape was a bit messy. It was common to lose sync with one or both decks, and the mix was performed by an audio engineer – no automation here. And, as before, if you got it wrong, you did it again ’til everything worked.

Today, by contrast, everything lives inside the computer. Multiple audio tracks are standard, synchronization is automatic and it’s easy to fine-tune the project until everything is perfect. Stereo and even surround-sound audio are common, and you can save the whole project and pick up where you left off tomorrow, next week or next month. As much as we appreciate the tedious work of days gone by, the next time you begin to edit, be thankful you’re not dealing with the production equipment of the past.

Every NLE is different, but most of the big boys – and even a few of the consumer applications – offer audio recording to the timeline. This great feature can simplify your project and keep everything in one program. Step one is determining what you want to record and where it goes in the project. A common application is recording voiceovers, but there is a small amount of housekeeping before you hit the Record button.

First, find the preferences section of your NLE, go to the audio section and pick the audio input source for recording . This can be your built-in sound card, an external audio interface, USB microphone or anything your computer recognizes as an audio input. You need to monitor the video playback along with the recording, so find the audio output section and set it to a device that can accept headphones. Again, your standard soundcard or other audio interface is fine. Finally, locate the setting that determines where the recorded files go and change it to your project directory. That should do it.

Back in your editing software, create a new audio track, and get it ready for recording. In Sony’s Vegas; this is as simple as clicking the Record button on the timeline. In Premiere Pro, you need to go to the audio mixer and click on the microphone icon. Most software apps that allow you to record directly will set up recording in either of these two ways. Now, settle back, grab your microphone, headphones and script, and settle in for some recording. 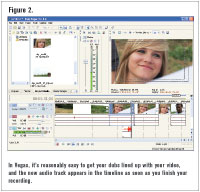 Next , place the cursor ahead of your first recording point, and hit the Record button. You will see and hear the video play back as usual, but this time, your recording will magically appear on the new track.

You can record in sections or do the whole thing in one pass. Delete clips that aren’t working, and record them again until it’s exactly what you want. With video playback as a reference, it’s easy to get in and out at the right times. Repeat this process for every audio element you need – voiceovers, sound effects, dialog replacement, anything. 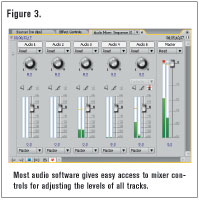 Dedicated audio programs excel at recording, editing and cleaning up recordings, but your NLE has some powerful tools too. Trimming the beginning and end of an audio clip is exactly like editing video and uses the same tools. Ripple delete, razor tools, fades… it’s all there, and you already know how to use it, so trim the clips accordingly. Next, you may want to apply some effects – EQ, compression or other processing – to your freshly-recorded tracks. This also differs from program to program, but it’s still easy to do. Some programs apply effects to the track as a whole, others apply to individual clips and still others do both. Once you’ve figured out how this works on your NLE, find the audio effects section and select the type of effect you want to apply. They may not look exactly like the plug-ins in your audio editing program, but they do the same things. On a voiceover track, you probably want a high-pass filter to minimize any rumble, some simple equalization to spice things up and a compressor to even out the volume of the track. Apply and adjust each as needed, and play the results until you’re confident with the settings . If your program offers effects only on a per-clip basis, it’s possible to copy the settings from your first clip to all other clips on the timeline.

The ability to record, edit and process audio directly on the timeline is like getting an audio editing program for free. While it may not have all the bells and whistles of a dedicated package, the convenience is priceless. It’s also easy to view the video as you record, making it possible to do Foley work and dialog replacement right inside your NLE. Mastering the process still takes time and dedication, but, as a self-contained video producer, you have all the tools at your disposal, piece by piece. It’s up to you to use them.

In true guerilla video-producing style, I recently needed to replace some footsteps on a video. If I had been smart, I would have recorded various steps, sampled them and brought them into the NLE at home. But nooo… I had to do it in the field. Fortunately, using a laptop, headphones and a shotgun microphone, I could simultaneously watch the video, match the walking cadence and record the result. It took several passes and some tweaking after the fact, but we used the actual actor walking on the actual path, and the finished video sounded completely authentic.