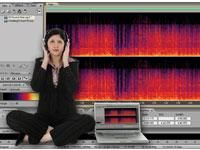 Digital audio editing has been around longer than digital video, and pretty much
everyone has edited some kind of audio at one time or another. Those who have know all the standard tricks: normalizing, trimming and basic EQ. But what do you do when the tried and true isn’t enough anymore? How do you solve those complicated audio mysteries on time and under budget? This month’s Sound Advice looks at four audio situations and the advanced editing techniques required to move your project forward.

While it’s possible to do a great deal of audio editing in today’s video editing packages, specialized tasks are better addressed by dedicated audio software, such as Adobe Audition, Sony Sound Forge, Magix Samplitude, Bias Peak and even the freeware Audacity. But first, you need to know how to export audio from your video project. Every package is different, but Premiere Pro uses an Export Audio function in the File menu. By checking and unchecking the speaker icons beside each audio track, it’s easy to export only the audio you want for editing. Save the file in a 16-bit, 48kHz uncompressed format and you’re ready to load it into your audio editing software.

If you’ve edited audio before, you know it’s easy to apply an effect to an entire file with a couple of clicks. But you can also select a smaller area of the waveform for processing. This opens up a whole new world of possibilities; for instance, removing plosives or breath pops from a voiceover. Applying a simple high-pass filter is the standard method for plosive removal, but the higher the cutoff, the thinner the performance. To retain the richness of your recording, zoom in and select only the pop at the beginning of the word – they’re easy to spot. Once you’ve highlighted only the offending breath noise, apply a high-pass filter with a more aggressive cutoff point (200Hz is a good starting place). This technique allows you to spot-fix breath pops, wind noise and other mechanical noises without radically altering your precious recording.

Automatic Gain Control (AGC) is the bane of audio purists the world over. It’s one of those ideas that looks great on paper but sounds bad in the real world. AGC in your camcorder works by listening to the incoming audio and raising or lowering the gain in response to the signal level. In theory, this should make the soft sounds louder while keeping the loudest sounds under control. In practice, AGC tends to pump up the background noise when there is no dialog or other sound. Once the sound resumes, the AGC pushes the volume back down, usually overcompensating for the change. If you can’t switch the circuit off, there are ways to smooth the impact.

The first method is a little tedious, but it’s possible to draw audio envelopes on your entire track. This requires setting keyframes or markers at every point you want to change – and possibly several more around them. Once you’ve done that, it’s a matter of raising or lowering the volume at the markers, based on the corrections required in the recording. Plan on lots of test passes. Another technique involves a combination of selective normalization and envelope application. Start by selecting audio segments that seem too loud or too soft, and normalize them to a percentage that sounds more consistent. After that pass, selectively apply a custom-drawn audio envelope to silence places the AGC has turned up. By itself, this effect may sound a bit harsh, but combined with music and recorded background noises, this will make the dialog punch through the soundtrack.

It’s relatively easy to edit dialog and narration, removing bits and pieces to tighten a performance. But how do you make a character or narrator say something you never recorded? In scene #144 from Breaking Ten, we had that exact problem. Two characters are talking on the phone, but the caller never greeted the other person. The only way to fix this error was to create the dialog from other bits of his performance. Since the segment was short and the caller could be off-camera, it seemed easy enough. Unfortunately, that two-second audio clip took almost an hour to assemble, edit and massage. Start by timing the empty section, and then go through the recorded performances to find individual words or phrases that can be repurposed. You can do a rough edit of the new dialog in your video editing software and export the audio to your audio editing software. Now the fun starts.
The perception of natural speech is a combination of pacing and inflection. In some cases, pacing can be accomplished by tight editing of the dialog. But if you study the flow of the talent’s speech patterns, you’ll find some words are slurred together, and sometimes certain vowels and consonants are glossed over. Simulating these patterns requires some work. In a multitrack audio environment, you can put each word on its own track, shifting them until they flow properly. Inflection is tougher. To create the proper rise and fall of a person’s voice, you can apply some pitch shifting to words. Audition offers both static and progressive pitch shifting, allowing you to set start and end pitches. Another alternative is a pitch correction plugin. These beauties let you draw the desired pitch changes over time. In any case, it’s a challenge and the results may not be perfect, but it’s cheaper and easier than a reshoot.

After a little time and practice, these techniques will become standard tools in your box. Just keep telling yourself, “this was impossible ten years ago,” and now you can easily do it in your living room.