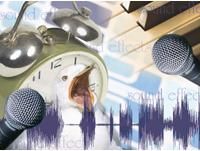 Movies with true organic sounds, imagined futuristic electronic audio, and even the everyday noises around us, aren’t complete without good sound effects.

The spacecraft has crashed into a swamp and as Luke and his droid inspect their new environment, a landscape of sounds surrounds them. Strange noises come from everywhere. Unseen creatures from above and below the water each leave their sonic fingerprints on the scene. Unless you’ve been living in a cave for the past 25 years or so, you’ve seen and heard this scene from The Empire Strikes Back. Watching the movie, it’s easy to believe it’s all real, even though the swamp was manufactured on a soundstage and the environmental sounds were gathered from around the globe. The sound effects sell the scene and connect the viewer to the action. And you don’t need a Star Wars budget to spice up your productions with sound effects. All you need is a little effort, creativity and some patience. Let’s get started.

The term “sound effects” or SFX covers a broad range of noises, including ambience, one-shots, human, electronic and mechanical sounds. With our digital editing tools, we can also repurpose sounds by shifting, reversing and other forms of manipulation. You may be wondering why we should go to the trouble of recording our own sound effects when there are so many good libraries out there. It’s a fair question. When you have a tight deadline or need a sound that lives on the other side of the world, sound effects libraries are the perfect choice. But sometimes, a project needs a specific atmosphere or sound that isn’t in the library. It’s also quicker and easier to record the actual sound during the shoot instead of digging through a set of 250,000 sound effects.

Depending on the sounds you want to capture, you can use almost any microphone, from the built-in stereo mic on your camera to a fancy shotgun model. The built-in option carries an upside and a downside–you can record in stereo, but you’ll have to live with any mechanical noise produced by the camcorder. If you’re recording busy sounds like traffic or running water, the extra noise won’t be an issue. For quieter settings, you may need another option. One of those options is a portable MiniDisc recorder or other field audio recorder. These small wonders record in stereo or mono at CD quality and will work for hours on a single battery. Just make sure it has a microphone input! If you prefer to use your camera, simply hook it up like you would for a video shoot, grab a pair of headphones and forget about the pictures. When you’re finished recording, capture through FireWire and delete the video part of the media or select capture settings that capture only the audio.

Scene #27 in our movie has the main characters, Bob and Rhonda, discussing recent events at the edge of the woods. After a heated argument, Rhonda storms off with the car, leaving poor Bob stranded. You’ve got your gear together and a list of sounds to record, and there’s a perfect place just outside of town. Scout the location with your ears, listening for good and bad sounds. Is there traffic in the background? Depending on the area, aircraft is a possibility too. This location is clean, so we’ll set up our equipment. Since this is ambience for our video, stereo recording is the way to go. There’s plenty of wildlife and water sound, so we’ll use the built-in stereo mic on the camera. For a completely natural feel, position the camera just as you would to shoot video. Slate the recording with a short description of the setting or scene number and let the tape roll for a few minutes.

Next on the list is a car door slam and tires throwing gravel as the car speeds away. For this setup, we’ll use a handheld or shotgun microphone to isolate the sounds. We’ll also record each element separately so we can get the timing just right in post. The door slam is easy — just point the mic at the door and slam it a few times, we can pick the best one later. Don’t forget to record the opening sound too. For the drive-off, we’ll set the microphone near the car, pointed in the direction it will drive. With safety in mind, we should locate the camera and people to the side of any flying gravel. A long mic cable and some safety glasses wouldn’t hurt either. We’ll record several takes of this one too, for more flexibility later.

Finally, we need to record a sound that can substitute for feet crunching through the leaves in the woods. Let’s set up with the handheld or shotgun this time too. Lay a large towel on the floor and dump a bag of potato chips or corn flakes in the middle. Feel free to crunch with your hands or feet — whichever makes the most convincing sound. Don’t worry about matching the pace of the video; we’ll record a variety of left and right footfalls to drop on the timeline. I guess we’ll have to clean up the mess at some point.

Once you’ve recorded your sound effects and dumped them into the computer, you need to mold them on your timeline. First, we find the perfect version of each sound. Next, let’s drop the stereo ambience on the timeline to establish the feel of the scene. The recording of the woods should enhance the feel without overpowering the dialog. Adjust the volume with track sliders or rubber bands to create the right balance. Now we’ll add the car noises. Scrub the timeline to the point where Rhonda opens the car door. Add that sound effect on its own track and then do the same for the car door slam, nudging each sound until it matches the action perfectly. For the drive off, we’ll do the same thing, but add a keyframed pan to the mix. The car drives from right to left, so set a keyframe at the beginning of the clip and adjust the pan 50% right. Now, go to the end of the clip, set another keyframe and adjust the pan for 50% left. Tweak for maximum effect.

We’ve saved the footsteps for last since they’re the most difficult. Play the scene and count how many footsteps you’ll need. If the feet aren’t in the shot, watch for body movement to determine their locations. Drop a variety of left footfall sound effects on one audio track and then add the right footfalls on another. Slide the sound effects around until you’ve created a convincing walking sound. If necessary, mute the other audio tracks to improve clarity as you’re editing. To help with timing, it may be possible to reference the dialog track for actual footfalls. Once you’re happy with the edit, play it a few times, listening for balance and realism. The sound effects should enhance the scene rather than call attention to themselves.

Now, it’s up to you to experiment with these techniques on your own projects. Adding your own sound effects to a video is a creatively rewarding process. It’s extra work, but you’ll gain valuable experience and a newfound respect for the SFX wizards who share their creativity on the big screen.

I recently worked on an independent movie called Breaking Ten. As the sole tech guy, I was responsible for shooting, lighting and audio. Working on tight schedules barely got some scenes shot, so I had to return later to record sound effects. Unfortunately, it was many months later and now the restaurant was out of business, the field with all the crickets had been mowed, and the creek was much lower than the day of the shoot. I know better. Lesson learned: save yourself time, gas and stress by recording sound effects while on location.